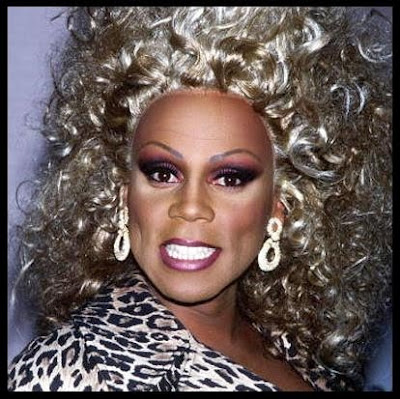 Image - Ru Paul, widely tipped to replace Cameron as the leader of the New Tories.

I never knew Ian Dale was 'a gay'.

So he is yet another anti-BNP lout whose politics is defined by his sexuality / race / naturalised citizenship status / support for Zionism.

Note that white males are being excluded from the process, which is quite simply racism.

Though if you are a gay, then your second class status as a white male is nullified as by wanting to insert your penis into another man this therefore means your 'whiteness' is scrubbed away.

I do not understand why the issue of where you enjoy inserting your penis into another willing adults orifices is of any relevance to you being advantaged either in employment, politics or the media.

So in order to demonstrate their repulsive adherence to political correctness the Tories have embraced racism.

What sort of mug stays in the Tory Party when they do this.

Every Tory in this country should be ashamed of themselves.

If the Tories ever find a posh, rich , gay, black, lesbian, transexual, immigrant then we can be happy knowing that under the Tories they will be next leader of the Tory Party itself - not on merit but because they tick all right boxes.

Yep, thought so - Ru Paul has just joined the Tories and been appointed as leader.

Heres a radical idea for the Tories.

In the past the only way to become a senior tory was to be born one - eg an aristocrat or buy your way in.

Now they want to use political correctness to pick their top people.

HOW ABOUT BASING THE PROMOTION OF PEOPLE IN THE TORY PARTY BASED SOLELY ON MERIT !

I know that is one radical suggestion, but if you think about it then it makes sense.

Just because you are black, gay or a rich posh bird doesnt mean you will make a good politician - and the aim of politics is to get the best people to represent the interests of their constituents, and not to tick the right boxes in the race relations questionnaire on membership of the party.


All political correctness schemes such as this do is seek to reinforce and create a ethnic minority middle class and also a gay middle class.

The first duty of any civilised nation is to integrate and assimilate its own people into the middle class, to raise them up from poverty and social alienation and offer them hope for a better a future.

But instead of doing this Labour and Tory governments have shipped in millions of immigrants and built an ethnic middle class and a gay middle class ON TOP OF THE WHITE WORKING CLASS.

Whilst the immigrants were assimilated and integrated, our own people of the white working class were rejected, impoverished and forced to stay where they were.

This was a crime against our own people.

That tells you all you need to know about the treason of the tories.


" This draconian measure has incensed local party members up and down the country, triggering a wave of protests and resignations which is in danger of spilling over into a civil war with devastating implications for Mr Cameron.

The associations argue that Central Office’s politically-correct lists of candidates — all chosen from its so called ‘A-list’ and designed to fasttrack women, ethnic and gay candidates — are mostly inexperienced outsiders who have none of the essential local knowledge expected of an MP by their constituency.

Yet Cameron, with his modernising agenda, is insistent — and the shortlist in Surrey East reflects this vision for the party. There are three women and — just as importantly — the ‘holy trinity’ of one Muslim businessman, one black businessman and an openly gay man.

The six candidates selected for them by Central Office to choose from at today’s meeting include: Tariq Ahmad, a marketing director for a financial company, who’s a councillor in Merton in south-west London; Iain Dale, who runs one of the country’s most successful political blogs, lives in Kent and is a gay; Sam Gyimah, an award-winning black entrepreneur who lives in Hampstead, north London; and three women — Philippa Broom, a west London councillor; Natalie Elphicke, a City lawyer who is a member of Cities of London and Westminster Conservatives; and Sally Marks, a former BBC World Service presenter and Surrey county councillor, who is the only local.

Posted by Defender of Liberty at 01:07

I think we should all send comments to Iain Dales blog informing him of our opinions on buggery.

I think the issue is simply why should his desire to put his penis into another man advantage him in the selection process of being an MP.

Whether he buggers a man or a woman is of utter irrelevance as to the merits of his doing the job as an MP, which is simply to represent his constituents.

It appears that homosexuals are a very powerful lobby in the US. It is apparently the same in England. And yes, being a white gay man is more "presentable" than being a straight white man. But I think that goes for all races.

Just Vote them out of office.

If anyone is making any Vids, Please feel free to use this 10 sec Animation.
Video Titles

So as once a member of the white working class of which I originated from and by merit got to where I am now, abhors the idea that hard work, and ability and reward by merit is not encouraged by our educational systems and government.

Cameron would rather go to Muslim family and praise them as a 'best example' of how white British people should live and so putting and white working classes in one fell swoop. It makes me sick to the core.

Thanks for that, excellent animation and very useful - I will also share with my fellow BNP video makers on youtube :-D

Perhaps. But why should ones sexual orientation ever be relevant for candidature? Fact is the liberal fascists are the ones who are discriminating upon sexual and racial grounds by making women only shortlists or other such quotas.

Lets get rid of all racial, sexual positive discrimination and have a level field - a meritocracy - and we will see which people end up with the jobs. Alas, we do not have a meritocracy, we have a degenerate liberal fascist state that selects candidates by race, gender and sexual orientation - and if you are white, male and heterosexual you are bottom of the pile.

Forget the suit, David Cameron is a Subversive hard core Communist intent on causing civil unrest to break down the 'old order'

Do Marxists ever stop to ask themselves, what if Marx was wrong, or perhaps even mad.

These Lib Lab Con policies should be turned into leaflets.