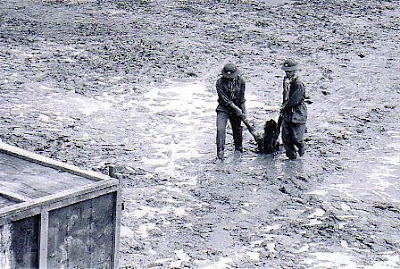 Image - the last known photograph of Kevin Myers as he is being assisted by senior NUJ officials into his first re-education class of 'Multi-Culturalism Class Number 1 - Never Tell The Truth '.

News just coming in that for writing the article below, Kevin Myers has been sent to an NUJ Re-Education Camp.

Remember that in a society built on lies, telling the truth is a crime against the State.

The most fascinating aspect of the debate about the future of Haiti is its absence. All "discussion" consists of assertions that "the west" must rebuild the country. "The west" is a useful term. If things go very well, the Haitians will get the credit. If they go moderately well, the EU -- but probably the French -- will claim the kudos. If they go badly, the US will be universally blamed (because that's what Yanks are there for) and everyone will be happy.

To suggest that the best thing that outsiders can do once the immediate rescue work is finished, and the water is flowing, is to leave the Haitians to rebuild their own country is merely to invite shrill accusations of racism. However, you might have forgotten that the Chinese were hit by an earthquake two years ago. It killed 68,712 people, left 17,921 missing, with more than 374,000 injured and at least 15 million homeless.

Even if those figures are invented -- and I suspect they're not -- they bespeak the existence of a government that can count, which is more than Haiti has ever had. (Cue hisses of "racist!" at this irrefutable truth). Yet the two earthquakes rather conveniently bring together the two extremes of foreignness. The Chinese -- who probably had the worst 20th century of anyone save the Jews -- do not naturally attract pity, yet without it, have largely rebuilt Sichuan. The Haitians have been cursed by pity throughout their existence, and now are probably about to be suffocated by it. In 10 years' time, I bet, outsiders will still be rebuilding Haiti, while the Haitians will continue to do whatever it was they were doing before the earthquake struck, back when George Hook went to build houses for them. It must be Stephen Hawking's turn soon.

Pity is the most human of emotions. It is also one of the most ruinous. It robs its subjects of responsibility, initiative, independence, courage, self-respect and will: hence the fate of so many African countries. Yet no pity rescued Poland or Italy or the Ukraine or Germany or Japan after the Second World War. Their peoples alone did.

Moreover, uncontrolled pity can damage those who feel it, sentimentalising judgment and elevating emotions. It makes an intellectual assessment of any problem almost impossible, for to use your brain equates with "heartlessness".

Yet pity is also a strangely useful tool, for it reveals a strange global hierarchy. At the bottom are black people, whom everyone pities. At the top are the Chinese, whom no one pities. Alongside them are the English, the one foreign group that Hollywood may officially reduce to unpleasant racist stereotypes. And the cultural censor that allows this actually has a strange Oedipal streak. For the only US ethnic identity which can be perpetually reduced to a stereotype of grasping, greedy, shallow bigots are WASPs. Not far behind them are the hillbillies of the Appalachians, namely, the Ulster-Scots.

Yet these are the very peoples who made the US (and who are both symbolically represented in that convenient pastiche, the Hatfields and McCoys). Between them, they founded and refined and fought for American freedoms, and then opened the doors of their country to the peoples of the world. The outsiders poured in, and ever since have shown their gratitude to the founding peoples of the USA by lampooning WASPs called Dexter and trailer-trash called Bub, in ways which would be unacceptable if the subjects were African-Americans or Jews or Irish Catholics.

The taboos of this cultural hierarchy cause even simple truths to remain unspoken. Jews have been disproportionately responsible for financial crime in the US, yet even to utter this simple truth is to court shrieks of anti-Semitism. In Europe, on the other hand, the only public criticisms of Jews that are not merely allowed, but are actually encouraged, are of Israel, about which "liberals" may utter the most ludicrously untrue and racist libels, and be applauded.

This strange cultural censor reluctantly allows us to acknowledge the role of blacks in street crime in Britain and the US, but preferably as a measure of their "victimhood". That blacks are grossly over-represented in sex offenders' wings in jails, however, or are responsible for the vast majority of trans-racial sex-crime, may not be publicly discussed at all.

Moreover, the total absence of Jews from sex offenders' wings is similarly unacknowledged, for it could lead to uncomfortable questions. If Jews don't rape, and they don't, then is it possible that our secular Christian culture -- never mind Afro-culture -- actually creates rapists? And if we can talk about Jews NEVER being sex offenders, can we then discuss Jews' disproportionate role as swindlers? Of course not: so we discuss neither.

You can say we have free speech -- but we haven't. Example: I can say Americans are loud, boorish, lazy and insensitive morons, and that's fine. If I say the same about Nigerians, I am in jail.

Look, you cry, he's at it again! He starts off quite innocently on Haiti, and look where's finished up!

Quite. I agree. You are looking nervously at the door. I am making you uncomfortable. You wish to leave. I quite understand.

Great little article that: it just goes to show that everyone knows the unwritten rules of political correctness yet foolishly are scared to break them.

We learned these rules somehow and we can un-learn them too and I believe it's articles like this in the mainstream media that will do it.

Great article but he is incorrect saying Jews are never paedophiles. There are many scandals of rabbis abusing Jewish kids, several paedophiles in the UK are of Jewish descent and the story of Roman Polanski and that 13 year old comes to mind, as well as the paedophile ring behind the massive Dutroux scandal in Belgium.