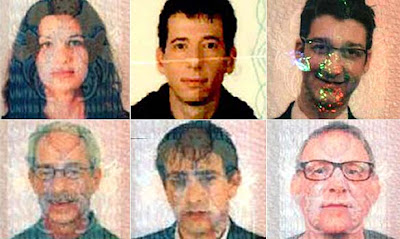 This is why Zionism cannot be tolerated in Britain.

These bungling idiots used REAL British passports obtained by one of their Zionist lackeys from the UK passport Office - and it was probably sanctioned or supported by the British government.

The Israelis have placed at risk not just the people whose identities they have stolen but all British citizens in the Middle East, who will now be suspected as possible Mossad hit men.

So much for Israel being a friend of Britain.

They are the agents of an hostile foreign power.


The alleged Mossad hit squad that killed a Hamas leader in Dubai used at least 12 fake British passports, it was revealed today.

Dubai police today identified 15 new suspects over the attack at a luxury hotel and warned that the country would never allow outsiders "to settle scores on its territory".

An official statement gave six new British names, as well as the names of three more Irish passport-holders, three French and three Australian. All the new suspects are thought to have been using faked passports after a massive identity theft operation.

Police have now named 26 suspects in the January 19 assassination of Mahmoud al-Mabhouh, a founder of the armed wing of Hamas and key contact for the supply of arms from Iran. In addition to the twelve Britons there are now six Irish, four French, three Australians and one German. Six of the suspects are women.
Times Archive, 1973: British protest over false passports

* Son of Hamas founder was spy for Israel

Police also said today they had tracked down the credit cards used by 14 of the suspects while they were in the Gulf emirate. The cards were all issued by MetaBank of the United States.

The assassination has been widely blamed on the Israeli spy service Mossad and prompted a chorus of complaints from Europe - although Israel has refused to confirm any involvement.

Flight details released today through the Dubai Government suggested that members of the hit squad flew into Dubai under their faked identities as early as March last year — suggesting an extraordinarily complex plot.

At one point last year no fewer than nine of the suspects were in Dubai at the same time, flying in from November 6-8 and leaving between November 8 and November 10. It is not yet clear why they were there at that point.

Detectives have been trawling through thousands of hours of CCTV footage, piecing together the hit squad's movements as they closed in on their target. A team from the UK's Serious Organised Crime Agency is in Dubai, helping with the investigation, and a SOCA spokesman in London said that the latest documents also appeared to be fraudulent.

"We're working to identify the locations of the individuals and we will be in contact with them as soon as possible," the spokesman added. The six people whose identities were stolen were encouraged to contact their nearest British consulate, if abroad, or a Passport Office if they are living in Britain.

In a strongly worded statement, Dubai police declared that the security of the country's people, residents and visitors was "a red line that should not be crossed".

It added: "The United Arab Emirates will never tolerate the violation of its sovereignty or allow external forces to settle scores on its territory, no matter what their ideology is."

Investigators have also been piecing together the assassins' finances. Documents obtained by The Times today showed that apart from the fourteen MetaBank credit cards, the assassins also used one credit card issued by the Nationwide Building Society and two by the UK provider IDT Finance.

The alleged ringleader, who was using a fake French passport under the name Peter Elvinger, used a credit card issued by DZ Bank of Frankfurt.

Posted by Defender of Liberty at 09:33