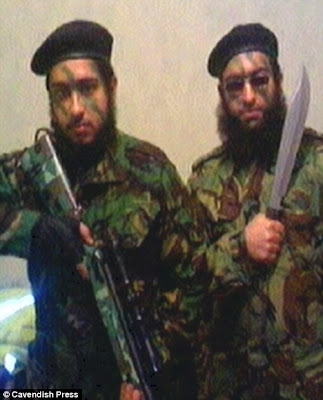 Waltham Forest Council has today pledged better support to members of the gay community, after a study revealed they suffer harassment at the hands of local ethnic minorities.

The announcement came as the authority published a new report, which claims many LGBT residents deliberately modified their public behaviour to avoid the threat of harassment or personal attack from black and Muslim communities.

One of the trio claimed they filmed the homemade movie from which the pictures are taken in the back garden of a house in the Lancashire town as a 'bit of fun.'

But all were arrested after claims they had become 'intoxicated by the evil of terrorism' and were imitating Al Qaeda propaganda in a training programme.

Posted by Defender of Liberty at 11:32

Its all so vibrant and gay and enriched with diverse multicult rainbows.

I wonder if the "Blackburn Resistance" received any funding from the local MP?
Who is it now? Errmmmmm .......

I thought the gays would luv the all inclusive life style labour as enforced on us all....

in any case this as been happening in once safe Amsterdam as Algerian Muslims attack gays on regular basis...

Lee, don't be silly here -- I am not a Muslim, but stop , and look at that picture again -- closely. Don't be a stooge.Watch the following video on mock up pictures such as the Yayha Gadahn fake ups. These pictures may be posed, and may serve ADL etc.

Lee, if you don't want to open a video link I added, then put the following words, "adam gadahn video fake" into google. Adam Gadahn is a fake.
So, most likely, the pictures you have here are fake too. Look at them ! The dark glasses, the camoflague paint, the bad lighting?

Don't be fooled. Don't do the job of idiots for them.