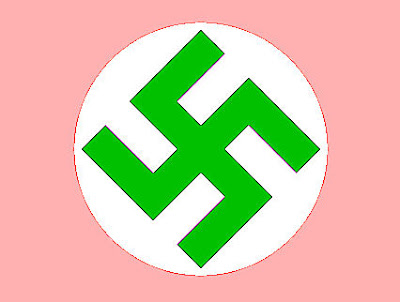 Image - The flag of Liberal Fascism. The Pink represents 'One World, One Race, All Consumers' Liberalism and the Green Swastika represents the New World Order built on the lies of climate change and the 'Green Agenda'.


( For the actual UN documents that reveal the plans for a New World Order using the Green Agenda as the mechanism to achieve this then read the actual documents from the UN here ; http://www.foxnews.com/projects/pdf/022510_greeneconomy.pdf )


Do you want to know why Cameron is trying so desperately to get as many new gay and ethnic candidates as MP's in the General Election ?

Its because he wants to do an 'Obama' in that by using a load of Middle Class ethnics and gays as candidates pushed to the fore in his propaganda and in the media then the public will think they are getting 'change'.

Watch this video from the US rapper KRS-1 who explains how the American elite used Obama as a puppet for the New World Order.

Only now, when the power of the British nation state has been devolved, usurped and given away into supra-national institutions such as the EU and the Globalist New World Order, are blacks and gays being pushed to the fore politically by the Establishment parties.

Because they represent 'FAKE CHANGE' when in reality they are just the same as all the white politicians, in that they are all powerless puppets of the same political machines, the media, the globalist institutions and the global economy that the whites have always served.

Black, Gay or White - they are all puppets.

Only those of all races who are prepared to betray their nation are allowed to be promoted by the globalist corporate media and enter politics.

The 'change' of Obama and the Cameron Conservatives and the Gay and Ethnic Middle Class puppets being promoted in the media and in politics is simply the New World Order 're-branding treason'.

They are merely changing the brand image of the New World Order from a primarily White, Zionist, Middle East oil billionaire and Jewish power elite to a racially mixed elite, but the treason still continues with the puppets of all races doing just the same as they always have done - which is selling out our nation, country and culture to the NWO.

The system stays the same, just that different coloured puppets are being made to dance to the same old tune.

Posted by Defender of Liberty at 04:43

Indeed it is but a brand change, the power elite is still the same.

However the brand has to carry favour and that is where the risk lies, the political nwo stooges are kept in a closed media bubble, they have no idea of what the public are really thinking, they have think tanks(NWO propaganda machines and their press that NEVER give a balanced view, even the opinion polls are rigged.

We end up with politicians who spout NOTHING but the media concensous, the Propaganda, not the wishes of the people.

They like to think the two are the same thing and to some degree they are as many of the public are concensous sheep.

However since the internet started to kill their media stranglehold they are taking very grave risks and are continously exposing themselfs for the treasonous frauds they are.

They also have to remember that while the ignorant passive sheep may buy the bullshit, that does not mean the more reactionary proactive more mature voters will.

Hence why they keep banging on about lowering the voting age to include those who have only ever experienced NWO indoctrination and not the real world.

Is it too late, have the sheep formed too strong a consensous to recover before the hard line tyrany starts black bagging people?

To a degree yes but ultimately we shall see?

Personally I think the NWO will out manuver the people, it only has to take a back step and stall, offr consolation prizes as long as it keeps a grip on TV.

If TV fell then it would be all over for them within a month but that is unlikely to happen.

The only real alternative TV media we have is Russia today.

I suggest the BNP promote this chanel as much as possible on the main website.

It is our interests to do so.

In the meantime expose the NWO for all to see and let the BNP lead the way as a website for alternative media that covers all fronts NWO.

Sorry, but this is madness on stilts. Your claims are laughable.

What out for them reds under your bed...

One day you will realise that the joke has always been on you.

But by then it will be too late.

Why is there row upon row networking trite tweets etc on the main page?

it looks a bloody mess and trivial, get something relevent and hard hitting on their, a tiny section for this stuff is all that is needed.

and get some sexy women images where possible on the BNP front page, i thought collet was the propaganda minister, other than pizza style leaflets what has he done to promote the BNP image?

come on mark get your finger out, everyone knows you can sell anything with attractive women.

Only the person who risks can be free

Free yourself from anonymous trite tweeting of those who DO act on their beliefs, twit, and become a man. You might even find a woman.

I don't know about the legalities of this but these policies should be supported by the BNP in that they should be made into leaflets and pushed through letterboxes along with BNP leaflets, giving people a real choice for their country.
You don't have to alter the stuff negatively, just print Tory, Labour, Lib Dem Policies.

We all assume that because we know something or because it was in a newspaper a while back, that everyone in the country knows it, in fact most missed it, along with tons of other stuff they ought to be aware of.

Just keep telling the truth, one thing the NWO can do nothing about is our natural survival instincts, sure people can know something is wrong but still vote Lib Lab Con but as soon as they are awakened to the truth there is no going back,

Weyman Bennet is a Great recruitment tool for the BNP, most Brits don't really care about skin colour, they do care about being exterminated.

People like Weyman Bennet, Simon Hughes, Shahid Malik etc are great for waking people up to the fact that something needs to be done.

Cameron with his African Invite.


They are setting us up for a Cultural revolution.
<a href="http://www.tinyurl.com/50millionsecretplot>50 million more on the way<a/>

Don't they teach this stuff at Sandhurst anymore.

Seems someone touched a nerve!

Critical of the website and the lack of positive image direction and all of a sudden it's personal abuse about girlfriends and commitment from someone who has no idea!

Pull your head back in and lighten up, you may then be able to present a countr argument dealing with the issues at hand rather than the ad hominem surflous garbage you just spewed out.

now as you are so critical of people being anon, why don't you tell us who you are and where you live?

Or admit you anon point was as pointless as the rest of your trite.

Lets break this shit down shall we Flanders?...


"Flanders as Anonymous said...
Trite tweet is what I just heard from the apathy bird."

Apathy, my post was critical proactive nothing apathetic about it! FAIL

"You are chiding someone who is a man"

I am critical of what i see as BNP failings in the hope of something constructive coming out of it, perhaps an overview of the party image, the battle of Britain idea was great and i suggested this myself many times over the years, this idea did not come it seems from your `man`. and as for someone being a `man` more irrelevant codswallop, do you have a personal interest in this `man`?


" - and you have nothing to beleive - maybe it's because you are nothing and will remain nothing."

Ad hominem ramblings of a madman!

Only the person who risks can be free"


I hear water is refreshing and about as relevant to the points i made as this trite.

"Free yourself from anonymous trite tweeting of those who DO act on their beliefs, twit, and become a man. You might even find a woman.

Ah `anonymous` is another pathetic ad hominim attack I take it, though I can't see the logic myself! We all have to have names as it makes the words we write so much more....?

You insinuate i don't act on my beliefs yet you don't know me or anything about me, other than my critisim of the website, is this not allowed, is Nick allowed to critisise the website, or Lee? are you suffering from a mental dissorder, do you also here voices?

A `man` this seems to be another obsession of yours, does being a `man` involve putting crap on the website? I saw someone on there today called `racist BNP` or some such thing, was that you with your isreal obsession? is that a real man?

Come back with your trite when it is actually relevant to the issues discussed huh.

It's called debate, you should try it sometime.