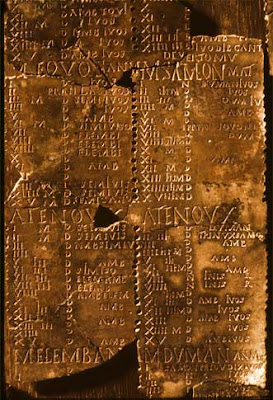 The place where Art and Science meet is the well of Wisdom.

The Coligny calendar is an example of how the Celts were not just supreme mathameticians, astronomers, artists and scientists but also metallurgists. This is so beautiful in its complexity , simplicity and design.

I will be posting up images and notes on some of the most beautiful examples of Art and Science as part of a series on European Culture and Technlogy.


The Gaulish Coligny Calendar was found in Coligny, Ain, France (46°23′N, 5°21′E) near Lyon in 1897, along with the head of a bronze statue of a youthful male figure. It is a lunisolar calendar.

It was engraved on a bronze tablet, preserved in 73 fragments, that originally was 1.48 m wide and 0.9 m high (Lambert p.111). Based on the style of lettering and the accompanying objects, it probably dates to the end of the 2nd century (Lambert p.111). It is written in Latin inscriptional capitals, and is in the Gaulish language (Duval & Pinault). The restored tablet contains sixteen vertical columns, with 62 months distributed over five years.

The French archaeologist J. Monard speculated that it was recorded by druids wishing to preserve their tradition of timekeeping in a time when the Julian calendar was imposed throughout the Roman Empire. However, the general form of the calendar suggests the public peg calendars (or parapegmata) found throughout the Greek and Roman world (Lehoux pp. 63-65).

The Coligny Calendar is thought to have first been fabricated in about 50 - 100 A.D. or about 100-years after the Romans made their unwelcome incursion into the affairs of Gaul under Julius Caesar.

http://www.sacredfire.net/calendar.html
Posted by Defender of Liberty at 08:00