The Utopia of the Hop Pickers 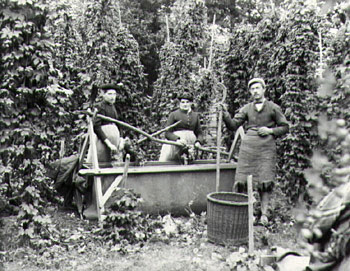 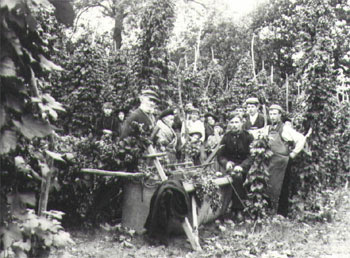 I watched a fantastic news story on Meridian local news, this weekend about how a roll of colour movie film had been discovered in Maidstone that recorded the Kent hop picking communities in late summer ebtween World War 1 and 2.

If there was ever an Eden on this earth, then those hop pickers between the wars saw it.

England in all its glory, before the storms cloud of war settled over the land.

This is a short poem based on the lives of those hop pickers, the bucolic beauty of their lives, the serenity of those summer months out of the city spent with friends and family where couples met, babies were born and the hops were picked.


Late August in languorous London, heat shifts between the streets,
Chocking throats with dust and disease, fly blown corruption,
Mud flats that seethe with fever, mock the lapping waters,
So the folk of the city commence their annual exodus,
And seek salvation amidst the verdant vales of Kent.

The breathless beauty of summer has begun to bloom, harvest awaits,
A new generation, whose fathers hands were never felt again,
Raised amidst the cloistered streets on a widows pension,
Now seek their sacred root amidst the hop gardens of heaven,
That blush divine upon the sunlit Kentish hills.

Whole families are crammed into the wooden seats of steam trains,
That fill with London’s laughing folk, its one true soul,
A rising tide of babbling excitement and joy, a dawn chorus at noon,
Chattering flocks flee the city seeking freedom from its streets,
By whistling farewell to Whitechapel and all of its woes.

Soon singing trains leave Victoria station chugging gently down the lines,
and city streets lay far behind, as through fields of flowers we flow,
The iron charger grinding down the distance, its flanks trembling,
Soot smoke coughing forth from the fiery furnace of its lungs,
As through the open windows, slips a breeze of sultry summer scents.

Flashing past the village stations, waving at local children in the lanes,
Till the steam whistle blows and the rumbling wheels slow,
And we stop at Faversham station, grinding to a halt,
Before rows of clattering cob horses, nibbling at the flower boxes,
Who pull the carts that carry us, to where each hoppers cottage waits.

First the chattering of our reunions and then all the usual rituals
Sweeping spiders from web frosted rooms, changing bracken bedding
From friday afternoon to early sunday morn, music is heard in the fields
Until the first sigh of dawn, and the misted morn lifts wet and warm,
Girls giggling in the cooking huts as salty bacon sizzles in the pan.

Steaming mugs magically appear, then plates of bread, butter and cheese
And the mist drifts away by the third mug of sweet stewed tea,
Then the measuring mans whistle blows, sweet as the song of a skylark,
And we start pulling the bines, begin breaking the fuggle lines,
The best vines yielding half a bushel, and flayed in a thrice.

The sun ripened husks of brewers gold, fruits budding on the boughs,
Soft as a womans skin, whose citrus scent intoxicates the senses,
The ravishing of hops, so plump with pollen dust and dew,
That falls in gentle sun lit sparkles, settling in whispers upon us,
Until we become as the ancients imagined, set into sublime stone.

Our green glistening fingers and hands, are so wonderfuly swift,
As we strip the tunnels of their tonnage, in a timeless fluid order,
Calibrated by nature to serve this soil, each serving the other,
For this is Troth, so effortless and graceful, a single mellifluous movement,
Of a community in perfect harmony with their land, their time and place.

Green fingered satyrs with sun bleached hair, glisten like golden gods,
And flit between the vines, as free as the clouds, to roam at will,
Flirtatious and divine, free spirits awing with infinite ease,
Like moths before a light at night, their whims swift like the wind,
Take them where they will, not by thought or design but by joy.

Gathering up the goldings where they fall, is a game for the children,
For the brimming basket that gathers the highest bushel tally,
brings forth a shiny new penny in the best boys pocket,
Bringing forth a sun bright smile, that never even sets in sleep,
As they dream upon a simple rural fagot bed of knotted oak and ash.

As wild foxes prowl the wires around the clucking chicken coops,
The little children all sleep safely in their snug hopper nooks,
parents, friends and family, laughing, singing, dancing,
form circles round simple camp fires of gathered wind dried wood,
Spitting sparks that rise into the infinite vista of the sky.

A white horse runs forever upon these holy hills of Englands blooded earth,
So the fair maiden of the land may be made fertile and bloom,
A totem of the Green Man whose love lays soft upon her, a kiss of lightning,
So she may bring forth blossoms from earths naked flesh,
As Herne the Hunter rides the crashing storm, blessing the harvest.

Through moonlit tunnels of trembling vine, young lovers stroll hand in hand,
Seeking sanctuary in the darkness, where a blanket awaits beneath the stars,
As the world moves around them hushed as if in a spell, awake but dreaming,
Entranced and enraptured by the precious seconds as they pass,
Then the perfect moment, at midnights flashing glance.

Haunting pipes in the distant darkness, compose a rustic paen,
As Pan cavorts in a sacred circle, leading the black parade,
Sparks flashing as his cloven heels strike the ancient stones,
A shooting star slips softly down, rushing deep into the void,
Into the sudden yielding sky, to seed the night with light.


Epilogue ; The End of Autumn

An old Gypsy lady, a blind seeress in a bowtop vardo, camped on Lammas eve,
and uttered a vision glimpsed, of serpents sliding through the sky,
Strange apparitions seen in her sightless eyes, demons out of time,
Iron angels falling to earth, scything the sky, sudden flashes of fire,
tumbling eagles, their talons locked in conflict, a portent of the future.


Armies empty from Babylons arsenals, angry words form snarls of thorn,
Cannons rolled out on parade, primed, loaded and made ready to fire,
The men in power tell lies of peace as the radios screech for war,
That lays in wait, a tiger in the thicket, its claws clenched expectant,
To waylay once more all unwary wanderers, who walk that lonely road.
Posted by Defender of Liberty at 10:20