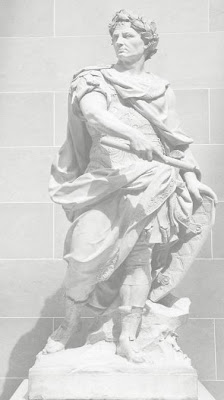 I am going to post a short series of the best movie speeches of all time, the sound link on the profile bar also has link to a video clip of another great movie speech.


From the movie Gods and Generals ;


In the Roman civil war, Julius Caesar knew he had to march on Rome itself, which no legion was permitted to do. Marcus Lucanus left us a chronicle of what happened:

"How swiftly Caesar had surmounted the icy Alps and in his mind conceived immense upheavals, coming war. When he reached the water of the Little Rubicon, clearly to the leader through the murky night appeared a mighty image of his country in distress, grief in her face, her white hair streaming from her tower-crowned head, with tresses torn and shoulders bare she stood before him, and sighing said:

'Where further do you march? Where do you take my standards, warriors? If lawfully you come, if as citizens, this far only is allowed.'

Then trembling struck the leader's limbs; his hair grew stiff and weakness checked his progress, holding his feet at the river's edge. At last he speaks:

'O Phrygian house gods of Iulus, clan and mysteries of Quirinus who was carried off to heaven --

'O Jupiter of Latium, seated in lofty Alba and hearths of Vesta --

'O Rome, equal to the highest deity, favor my plans.

Not with impious weapons do I pursue you. Here am I, Caesar, conqueror of land and sea, your own soldier, everywhere, now, too, if I am permitted. The man who makes me your enemy -- it is he who be the guilty one.'

Then he broke the barriers of war and through the swollen river swiftly took his standards. And Caesar crossed the flood and reached the opposite bank. From Hesperia's forbidden fields he took his stand and said:

From now on war is our judge.'"

Hail, Caesar: We who are about to die salute you.

http://www.americanrhetoric.com/MovieSpeeches/moviespeechgods&generalschamberlainsrome.html
Posted by Defender of Liberty at 16:12

And how they came under heavy attack, where one of Chamberlain's young officers, a former student of his, came to him in great anguish and asked, "Permission to go to the rear, Sir!"

The lad's arm had been shot off. He died of his injuries. It was an example of real dedication and loyalty - in contrast to the subject of your post above, which I think I know what you're referring to.

The late Alice Rains Trulock wrote an excellent book about Chamberlain entitled In The Hands of Providence.

Chamberlain was himself severely wounded during a frontal attack on Petersburg on June 18th 1864. A musket bullet entered his right hip and passed through his body, almost emerging via his left.

"The bullet had torn through his whole body from right thigh to left hip, severing blood vessels, nicking the urethra and bladder, and crushing bone before it stopped."

A stretcher party found him and took him to a dressing station. The surgeons worked on him all night, though stopping at one point because of his terrible pain. He urged them to continue but in the cold light of dawn, believing death was near, he pencilled a short note to his wife and children:

""My darling wife I am lying mortally wounded the doctors think but my mind & heart are at peace Jesus Christ is my all-sufficient savior. I go to him. God bless & keep & comfort you, precious one, you have been a precious wife to me. To know & love you makes life & death beautiful. Cherish the darlings & give my love to all the dear ones. Do not grieve too much for me. We shall all soon meet Live for the children Give my dearest love to Father, mother & Sally and John Oh how happy to feel yourself forgiven God bless you evermore precious, precious one Ever yours Lawrence.""

But he survived and was chosen by General Grant to receive the Confederate surrender of Lee's army at Appomattox Court House on April 12th 1865.

According to Trulock, p 309, Chamberlain reflected on “the terrible memories of past battles” and wondered "“How could we help falling on our knees, all of us together, and praying God to pity and forgive us all!”"

An inspiring leader, I think.

I look at the lives of these men, their simple greatness, their valour and their nobility - and then I look around at the cultural, spiritual and social desolation of our people and the state of them today and wonder - how do we make our people as great as they once were again ?

At least we have their example to still guide us in the darkness of today.

During the last Party meeting I attended, we considered the men who fought at Passchendaele in 1917 and the men who flew on the Dam Busters' raid in 1943.

And it was concluded that "They were different men."

As for the difference,

Queen Victoria once said, "That Book accounts for the supremacy of England."

That is what produced the nation and its national character - according to the hymn writer F.W. Faber - who actually regarded the English as "heretics," thanks to the influence on him of Cardinal Newman.

As a song writer, though, he probably knew something of the national mind - and as a wise man is said to have believed that "if a man were permitted to make all the ballads, he need not care who should make the laws of a nation."

Which quote just happens to have come from a book called The Marxist Minstrels.

The trouble is, the higher you ascend, the further you can fall and the greater the resulting damage.

Two catastrophic things that have happened to our young people in the last several decades:

1. They no longer go to Sunday School with the old King James, like they used to up until the 1950s.

As a dodgy but nevertheless astute businessman once said: "I can get you a load of bibles, Sir. Good discount, all King James, no rubbish!" - Private Joey Walker, Warmington-on-Sea Platoon, HG. Many a true word...

2. Their heads are full of junk music that bears no relation to the orignal music of these isles.

No-one should be surprised when white British youngsters then say that they have no sense of identity.

We must work on the political front - and I only hope that the Party has the wisdom and resolve to sort out these current difficulties - but these other two areas cited above are germane to the national degeneration, I think.

The State of the Nation, send this to your friends, relatives and collegues ,ask them to do the same.

The Eradication of National Identity
http://www.brusselsjournal.com/node/865

it shows Labour AND Conservatives AND The Civil Service AND The Press Conspiring against AntiEuropeans.