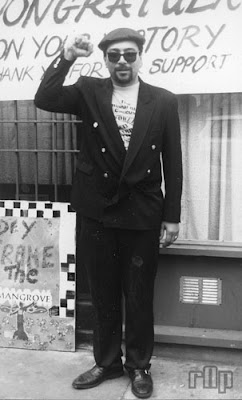 Image - Lee Jasper, idiot black nazi doing Black Power salute. Now the racist prick works for the London Mayor Ken Livingstone and sits on the London Policing Board with the Metropolitan Police. From gangster to controller of the london police.


We all knew that Lee(ch) Jasper was a scumbag crook, but now he has finally been busted for it.

It appears that this 'soul brother' has been riding the race relations industry all the way to Cash In City. Thats a hell of a lot of bling that Leech and his mafia can now afford.

It also appears that the London Mayors office is the worlds largest ATM machine for Lee Jasper and his cronies.

Not content with robbing all Londoners, specifially he has been scamming money that should have gone to the ethnic minorities of London.

Whilst he has been talking about fighting racism, he has been busy robbing money from his own community. Lee Jasper is the primary leech of the parasitic race relation industry.

I have been telling people that the race relations industry is the new mafia, the orgaanised crime wing of political correctness, now Lee Jasper has proved me right.

Fuck you very much Lee, you vile pathetic leech.
Posted by Defender of Liberty at 13:55