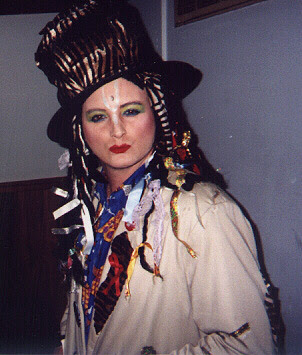 
It now appears that the South Park Gang and their braying supporters have added four more demands to their ever growing list of 'demands' before they will dignify the party with their presence again , these are ;

1) My removal from the party

2) Arthur Kemps removal from the party

3) Martin Wingfields removal from the party

4) The removal of Uncle Tom Cobley and all.


Ok. The last one was me messing about, but you get the idea dont you.

The list of demands gets longer every day, the more they realise they aint gonna get a single one the longer the list gets.

Its like watching the Titanic speed up as soon as it sees the iceberg.

Reading the postings on the site is like watching a toddler having a tantrum stamping his feet on the ground and wailing ' I WANT IT NOOOOOOOOW ! '.

What a bunch of brats - they need mummy to slap their legs dont they.

Its like watching an old 1970's news clip of a hostage situation with some dozy Palestinian terrorists on a hijacked jumbo jet reading out their demands through the cock pit window, " we want a helicopter, a billion pounds, every terrorist named Abdul released from prison, hob nobs WITH CHOCOLATE biscuits, the autographs of all the Spice Girls and a copy of Hello OR ELSE WE BLOW THE PLANE UP ! "

We all know what happens next.

These cannot be nationalists, please god let these not be real nationalists but reds just stirring things up.

If these are nationalists then we have a lot more hard work before us than I ever truly appreciated.

"Anybody who wishes to see Collett remain in the party is as treacherous as they are stupid.
Barnes is stupid.
Griffin is stupid.
Darby is stupid.
Wingfield is stupid "

and then the chorus ,

" And war is stupid
and people stupid "

Great one George. I look forward to the reissue of that one.

My favourite poster on the site though is lawyer.

This man obviously has a few chromosomes missing, though it is admirable that he has managed to learn to read, write and type.

This is what Lawyer, amongst his other classics, has just said about me ;

" Barnes's lasting "achievement" as the party's "legal eagle" was to mess up poor Mr Redfearn's case by making a claim for direct discrimination instead of indirect discrimination. Given such an elementary mistake it beggars belief that he even managed to get a law degree. It just goes to show how standards are slipping in higher education institutions. I'd be surprised if he got more than a third class degree."

Oh dear lawyer - I didnt have anything to do with Arthur redfearns case you moron.

And I didnt get a 'law degree' - I got an HONOURS DEGREE IN LAW.

If you can remove your head out of your arse long enough to take a look the computer screen you will see here ;

that the solicitors firm that represented Arthur was John Bowers QC (Mitchells, York) for the applicant.

I did not represent Arthur Redfearn at in any way in his case - though I wish I had done.

Never let the truth get in the way of your usual nonsense, idiotic advice and utter imbecility eh lawyer.

If you are the one giving the South Park Gang their legal advice, then its no wonder they are about to commit political suicide with you as sepuku.

I think that lawyer is not lawyer, but a certain deranged hag that haunts the edges of the internet as a foul sulphorous smell haunts the edge of a boggy swamp.

We know who you are dont we, you hag.

Now get back into the torture chamber where you entertain your clients in the basement, you ugly creature.
Posted by Defender of Liberty at 13:50