The True Face of Multi-Culturalism 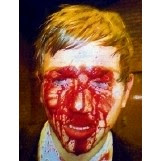 This is the true face of our Multi-Cultural Society, the face of a young white victim of racial violence, blood stained and beaten by a mob of black racists.

A 21-year-old man fears he will be scarred for life after he was racially assaulted in a Bristol city centre street by a gang of racist black thugs.

Jake Peters was left needing 15 stitches to patch up wounds on his face. It is claimed that Mr Peters was set upon by a gang of up to 15 black youths who were said to have shouted racist remarks during the incident.

This young man is also a break dancing champion - I bet he jacks it in and joins the BNP now.

Yet another brainwashed victim of multi-cultural nonsense.

Raised on the lies and propaganda of multi-culturalism all the way though his shcooling, disarmed by the lie that 'only whites are racists' and taught to fetishise ethnic culture whilst being brainwashed into hating his own colour, history and culture and then turned out of the school gates filled with their vapid propaganda as a walking victim of whatever ethnic gang first chances upon him.

For facts on the ongoing genocide of the indigenous British people by racist invaders and criminals visit the Fallen List blog here that records every White victim who dies in our country at the hands of an alien criminal ;

http://thefallenlist.blogspot.com/
Posted by Defender of Liberty at 05:51

The mainstream will talk about this "shocking incident" before going on to stress "There are good and bad in every group" , "We must not judge all people by the actions of a few" etc.

This cycle will repeat ad nauseam until the people start voting BNP.

This story, along with Simon Darby's blog post about Billy Ward, really brings home the hypocrisy of the media in regards to race attacks and the cavalier attitude of our lords and masters to the real face of racist violence in this country.

I've written a piece about your and Simon's posts and linked to both.

I never had a clue this was going on mind you i do live out in the middle of no were we're not really touched by multicultralism.Ive read about the asian guy in bolton