Image - The Grand Mufti of Jerusalem on a visit to Muslim SS troops in the Balkans during WW2, "Yes, thats right. Put the bullets in there and then go forth and kill as many Christians, Nationalists and Jews as possible for the glory of Islam and the Third Reich". 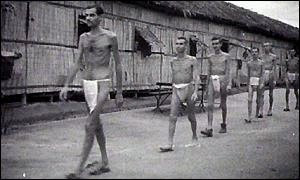 Image - British soldiers in starved state after the Japanese surrender. 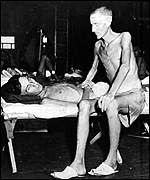 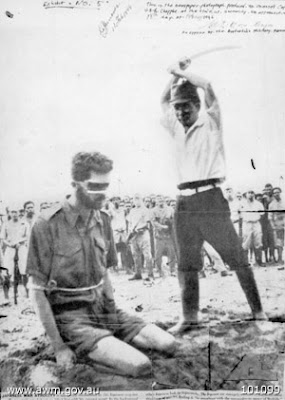 Image - Aitape, New Guinea, 1943. An Australian soldier, Sgt Leonard Siffleet, about to be beheaded with a katana sword. Many Allied prisoners of war (POWs) were summarily executed by Japanese forces during the Pacific War.


You can just the imagine the left and liberals going into a screaming rage if the headline above about Himmlers daughter was ever printed in the newspapers can't you. They would be howling about it.

But note how the news that the Muslim Council of Britain is going to attend the Holocaust Memorial Day has not been attacked or the MCB accused of being a disgrace to the memory of those who died.

The MCB should not be allowed to attend the Holocust Memorial Day until they apologise for their part in the Holocaust and condemn all forms of Islamist / Muslim terrorism and violence in the UK and around the world, with no weasel words or equivocation.

As members of may family were imprisoned in a death camp during the second world war, my uncles Eric and Lloyd Holmes of Acton were captured at the Fall of Singapore and were held in Changi prison and worked on the railroads, I feel that the presence of the MCB at the Holocaust Day is a disgrace - just as if representatives of the Shinto Yasukuni shrine would be invited to attend a Japanese Death Camps remembrance Day for the victims of the Japanese death camps.

Some 100,000 Allied soldiers and civilians were taken prisoner into Japanese hands when Singapore fell on 15 February 1942.

It was described by Winston Churchill as the "greatest disaster" in British history.

It is an absolute disgrace that whilst we have a Holcaust Memorial Day for the victims of the Holocaust we do not have a day to commemorate the 12,000 British troops slaughtered by the Japanese.

Now that is truly a disgrace.

The Muslim Council of Britain voted this weekend to end its six-year protest, which had angered the government and Jewish groups.

The decision may lead to some groups leaving the MCB, an umbrella organisation with over 500 members. Its working committee voted 18 to 8 to end the boycott, which began in 2001. Those who voted to attend said the stance had allowed the MCB to be accused of antisemitism and seeming to disrespect the suffering of Jews.

Representatives of the MCB will attend the next memorial day, on January 27, in Liverpool. The decision is an emotional one for members. Those supporting the boycott believe the memorial day is too narrowly focused on Jewish suffering and ignores recent genocides such as that in Rwanda and of Muslims in Srebrenica.

Daud Abdullah, the council's deputy secretary general, voted against attending and said: "I'm against it [attending]. Nothing has changed, we saw no reason why it [the boycott] should change."

The former secretary general Sir Iqbal Sacranie voted to end the protest and said: "There are voices who have been attacking us from day one and trying to misconstrue our non-participation as antisemitism."

Sacranie's last years as secretary general, which ended in 2005, saw him publicly justifying the boycott despite personally opposing it. He called on groups upset by the decision to respect the democratic vote and stay within the MCB: "There will be some who will be very unhappy about it."

Sources say the MCB would have ended its boycott last year, but was attacked by the then communities secretary, Ruth Kelly, over the boycott, and did not want to be seen to be caving in to government pressure.

In a statement the MCB assistant general secretary, Inayat Bunglawala, said: "We have always sought a more inclusive title such as Genocide Memorial Day so that it would also give recognition to more recent massacres such as in Rwanda and that of Bosnian Muslims in Srebrenica. We wanted to uphold the principle of the equality of all human beings.

"However, there was a growing recognition among our affiliates that non-attendance of HMD was inadvertently causing hurt to some in the Jewish community. The MCB has always placed a lot of emphasis on inter-faith work and building ties ... so this was becoming a problem."
Posted by Defender of Liberty at 06:36

Gemocide in Srebrebica? I don't think so. And is he saying that Bosnian muslims are snow white? I'm sure he doesn't mean the same Bosnian muslims who behead non-combatants, burn the elderly in their homes or desecrate corpses?

Funny how he doesn't mention the genocide of the armenians, the copts, the maranoites, the zoroastrans and not forgetting nigerians and Sudanese as well as many more - I wonder why?

The MCB are an affront to humanity. Liars, deceivers, cheats and terrorist scum just like their insane prophet. The quicker the BNP get into power and rid us of the Islamic plague the better.

My late uncle was captured with other Australians of the 8th Division AIF at the fall of Singapore.

He worked on the Burma Railway, survived, came home and lived to the age of 85 - i.e. one of the fortunate ones.

I think about 1 in 3 Allied POWs died.

Both my uncles survived, though Lloyd was broken by the ordeal. He never recovered either mentally or physically.

One of my other uncles fought in Burma with Sikh troops. For decades after the war his wife would find him in the kitchen in the dark washing himself down in the early hours of the morning when he awoke from a dream of the war. When asked what he was doing he replied ' I am washing the blood off me from the japanese throats I cut '. He used to be one of the men that would open up attacks on a target by sneaking up on the japanese sentries, identifying them in the dark by the way their bootlaces were tied on their boots by reaching out in the dark and touching their feet and then would cut their throats before allowing the reat of the unit to attack the targets.

We have no idea what those great men suffered, as their sacrifices are forgottn and minimised so that political stunts like Holocaust Remembrance Day can be used to brainwash school children.

Our kids should learn their history before they learn the history of others.