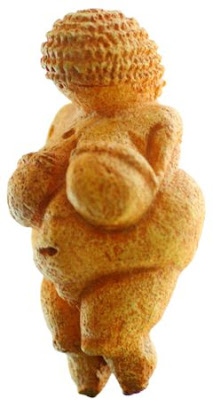 There are very few works of art and science that can truly astonish one. This is one such a piece of art.

The tiny figure, found at a site near Baghdad, had been on loan from Alastair and Edith Martin to the Brooklyn Museum of Art for nearly 60 years. It is thought to be at least 5,000 years old.

It is a 3 1/4-inch limestone lion / female hybrid Goddess from ancient Mesopotamia fetched the highest price ever paid at an auction for a sculpture - $57 million.

The most beautiful of ancient art though are the Venus Figurines of Ancient Europe which were carved up to 31,000 years ago from the Aurignacian or Gravettian period of the upper Palaeolithic, found from Spain to Siberia. These items were carved from stone, bone or ivory, or molded in clay and fired. The latter are among the oldest ceramics known. 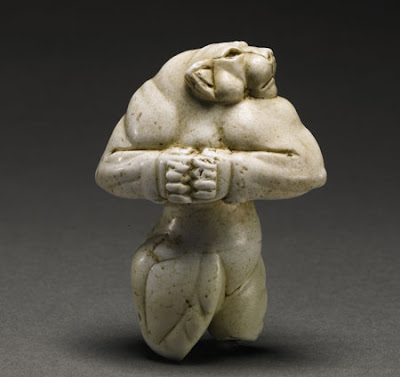 The Guennol Lioness figure seems to represent an ancient totem to be worn around the neck and intended to avert attacks from lions in the area, and at the same anthropomorphisises the savagery of the lionesses with a female half human / half lion Goddess.

It is the female lions that do most of the hunting and kliing in lion prides. The role of the male is primarily symbolic in lion prides and the male undertakes symbolic violence ( violence not associated with immediate survival needs eg food )as a mating fitness indicator, protector of territory from other males and sperm dispenser.

In order to avert violence from lions, then it is to a female lion diety that one should appeal. The female of the species is always more deadlier then the male. This is why the Guennol Lioness seems menacing and dangerous.

The Venus Figurine appears as an invocation, whilst the Guennol Lion appears to be an excorcism.

The Venus Figurines are aspirational, the Lioness repellent.

Art is a comment on the both the culture and social form of a civilisation. The Lioness suggests a society that is hierarchical, militaristic, paternalistic and violent and that is afflicted by attacks by lions in the countryside - which could indicate a breakdown in society that weakened the ability of the state to keep down predator numbers, or that some sort of climate event was driving the lions to attack people.

It is a unique peice of art in a unique civilisation, at a unique piece of time at a specific location. The fact that farming was first recorded in the area where the Lioness was found in Mesopotamia, shows that with the creation of farming communities Man did not separate himself from nature - but that Man then had to defend himself AGAINST nature, rather than living in harmony with it as he once had.

The Venus Figures suggest a communitarian socity, agrarian, matriarchal, diffusionist civilisation that lived in harmony with nature across much of Europe for tens of thousands of years. Rather than imposing himself and his society on nature, as the people of the Lioness did thereby invoiking the wrath of the Lioness Goddess as nature personified (climate change, environmental denudation, famine, war lion attacks, disease etc), the people of the Venus figurines still lived in harmony with nature.

By not seeking to overturn the natural order, and by living in harmony with nature and the land, then the nemesis of nature ( the Lioness Goddess) did not attack the people ( famine, disease, animal attacks etc ).

This is shown by the fact the Venus culture survived tens of thousands of years in Europe, whilst the Lioness culture did not survive more than a few hundred.

Each civilisation that undermines its own existence by not living in harmony with its own evironment, invites its own nemesis - and for some civilisations this nemesis has the face of a Lioness.
Posted by Defender of Liberty at 05:35