The Real BNP - The Ghost of Christmas Future 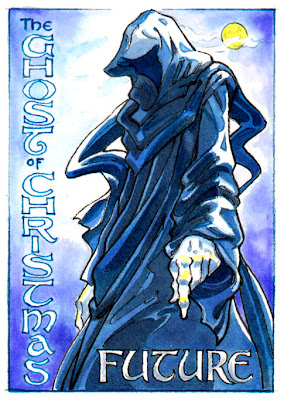 I offer you all now a vision of the Ghost of Christmas future ;


In the dying days of the internal split that hit the BNP, after various death threats and sordid attempts at blackmail by the various supporters of the plotters succeeded, the plotters were allowed to rejoin the BNP with no disciplinary tribunal, no public hearing of the evidence against them and no punishment for their illegal actions whilst acting as party officers.

The BNP constitution was simply ignored so that they could rejoin the party.

The supporters of the plotters in the party that had been motivated only by their own sense of individual loyalty to the plotters were ecstatic, for their heroes had returned home.

But the BNP constitution, which once protected all the members from abuse and threats from members who wanted to force them to do as they and their factions wished through threats of violence and mob rule, lay in tatters on the floor.

As a result of the constitution being torn up, no member was now able to protect themselves from any mob which formed within the party.

Anarchy and violence had replaced the constitutional process.

Adherence to the legal process that once ensured the party was disciplined and coherent no longer functioned, and any member who was attacked, targeted and abused was now no longer able to demand the party leadership protect them and punish the attackers.

Mob Rule had replaced the Rule of Law, and a dozen petty dictators with their own gangs of thugs and boot boys now organised within the BNP to promote their own agendas and plans within the party.

Instead of a political party the BNP now became a cult, where the most violent psychopath with his coterie of adoring thugs became the most powerful faction in the party.

Instead of winning elections what now mattered was winning fights, and the party dissolved into a series of factions using violence and brutality to impose their will upon the powerless and weakened leadership.

The most powerful faction that developed though was of course the State Faction, backed up as it was by the power of the secret state this being MI5 and Special Branch.

The next most powerful faction was the Searchlight Faction, which had the money to buy off those it needed in order to build up the powerbase of its faction and to blackmail others into obeying its orders.

The Party Chairman, made powerless by the surrender to Mob Rule, left after a few months of trying to keep the party together, resigned and formed another Nationalist political party and left behind only the ever diminishing members of the factions and plotters.

With the BNP constitution now disabled and meaningless, the party was now run on the basis of which firm had the most amount of thugs and boot boys in their ranks.

Whilst the Neo-Nazi Special Branch Faction managed to recruit a few hundred of the old Nazis from the wider neo-nazi movement, much of their ranks were filled with state agents and paid grasses. For the Special Branch Faction this was simply a re-run of the old Column 88 days, when the Column 88 groups were a state sponsored and run organisation to be used against all those in the country that threatened the power of the criminals that control the Militray-Industrial Complex.

Anyone the leaders of the Special Branch Faction labelled a 'moderate' or a 'Jew' was either brutally assaulted or simply removed from the party.

With Darren Wells, an ex-leader of C18 now operating as a full time paid adviser to the Searchlight faction, the Searchlight Faction were able to specialise in recruiting football hooligans and thugs.

The speciality of the Searchlight Faction though was heavy drinking, coke dealing and mindless violence, and they recruited most of their followers from the terraces.

Instead of politics, the Searchlight Faction was based on heavy drinking and various fall outs over what football team the members of the faction supported.

The new party treasurer was appointed to the the role with no consideration of his talents but simply because he had the most amount of Special Branch Factions thugs on his side. The leader of the Nazi Faction operating under the orders of Special Branch now ordered the Treasurer to give him the remaning funds and issued orders that the party now adopt the Swastika as its party symbol and ordered his followers to wear the black shirt and jackboots.

All those in the party who would not obey his orders were labelled as Moderates and Jews and were purged from the party.

All the time the Nazis were purging the ranks of all those they suspected of being Jews and moderates, the state agents in their ranks were building up dossiers on those who used violence, so they could blackmail them in the future.

Within a few months of Mob Rule in the party, over 70 % of the party had left the party whilst what was left of the party was split into at least four factions, with each of these splintering into ever smaller factions as the leadership of those factions turned on each other.

The remaining moderates resigned a few days after Nick Griffin left leaving only the Searchlight Faction and Special Branch Nazis running the party.

The mob rule was so chaotic that at times even the State Faction and the Searchlight Faction fought each other in the name of Hitler, Gregor Strasser and National Socialism !

The party now no longer had a Chairman and each faction had its own policy and organisational base.

The Neo-Nazi faction under the control of Special Branch, embarked on a plan of political violence targetting known ex-officials of the old BNP who were capable of building and running a moderate nationalist party.

All those targeted were attacked, and all those who did the attacking were secretly filmed by undercover Special Branch operatives who then used the films to blackmail ever more of the leading membership of the Special Branch Nazi Faction.

Those BNP members that stood for election were then attacked not by reds, but by the factions still within the BNP.

Even the plotters who triggered the initial crisis in the party were purged from the party, as each of them were unfitted to lead any faction based solely on their lack of capacity for psychopathic violence. They were soon labelled as Jews and Moderates, attacked and removed from the party.

As soon as the last few nationalists within the party sought to re-establish control of the party the Special Branch Faction within the Nazi camp sent a few thugs to attack them.

They resigned the next day and within 6 months only the various mobs were left to rule the party.

Special Branch and Searchlight now ran the remnants of the old BNP under the flag of the Swastika with an agenda of using the party to attack any nationalists and nationalists parties that may arise to challenge the established political parties.

Within a year the entire nationalist movement in Great Britain was dead, and within thirty years the indigenous British people were slaves in their own country controlled by aliens.

This is the story of the Ghost of Christmas Future, if Mob Rule is ever allowed to replace the BNP constitution and the Rule of Law.
Posted by Defender of Liberty at 02:15

It appears that various Searchlight and State assets dont like this glimpse of the Ghost of Christmas Future - well, they would do wouldnt they seeing as they have been paid to try and split the party before the GLA and London Mayoral elections.

The timing of this split was ever so handy for the State - what with the Tories now screwed as the Liberals have now elected an electable leader. The Tories will now lose all their soppy liberal / left votes whilst the political right of the country who have been abandoned by Cameron and the Tories because of the limp wristed liberalism will now vote BNP.

With UKIP dead in the water the void on the right of British politics would have been filled solely by the BNP.

Thats why we had to be destroyed by the State and its lackeys.

I reckon this plot was primed to explode just before the London Elections - and by pre-empting it we have undermined all their plans.

Now they will just have to ensure Nick Griffin has an 'unfortunate accident' instead.

Check your tyres and brake pads every day nick - its happened before to those in arties of the Far Left and Far Right who are about to make the breakthrough into the political mainstream and will happen again.

Note that the role of Special Branch is to infiltrate and subvert all parties of the right and left who are not part of the political establishment - it is the role of the secret state complex to ensure only that the mainstream political parties enter power. When it appears any party of the right and left are about to make a political breakthrough - then factions appear within their ranks and the parties are split into warring factions.

Then they fall apart and the same corrupt mainstream political parties stay in power.

Therefore the idea that the party should give into the braying of the mob and ignore the constitution is the politics of the idiot, the cultist and the fool.

We KNOW what we are facing and we know how to deal with it.

Unfortunately anyone who has ever studied the history of British nationalism, will know that allowing one mob in the party to form will then lead to another mob forming to counter the first mob - and then the descent into factionalism begins.

When the rot of factionalism is discovered it must be cut away before it spreads.

Sending out the signal that, " Hey, its ok to spy on your comrades, steal their e mails and then set up blogs to attack fellow officers and cause dissent within the party - come back on board and we will just pretend it didnt happen " is merely an incitement to others to do the same thing.

Dont do the crime, if you cant do the time.

Dont whine when you get caught. Walk away with a bit of dignity instead of getting your pack of dogs to run around howling until they get their way - which they wont.

You've proved yourself right on previous occasions, Lee. I know Nick and the members of the Advisory Council are certainly not naive enough to think we can sail to power unopposed, but the sooner we use these examples of treason to educate our members on the tactics used by factionalists (State sponsored or otherwise), the better.

Educational blogs are one step forward, but these lessons need to be rolled out to the wider BNP audience.

To all those loyal members, under attack or not, very best wishes for 2008; don't give our opponents an inch.