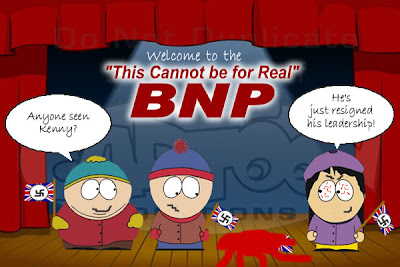 Another exclusive still from The South Park Gang Episode 3 - A New Leader Arises.

The Real BNP is set up by the The South Park Gang and Kenny The Fuhrer is put in charge. A telephone box is booked on Orkney for their first mass meeting.

Then Kenny has a strange and rather unfortunate accident where after doing the gardening round Cartmans house, half a pound of weedkiller and sugar 'accidentally' mix together in his jacket pockets resulting in an explosion when a spark from his microphone 'accidentally' ignites the mixture when he is on stage in the telephone box at their first public meeting.

Never mind though, as luck would have it Cartman and Wendy Testaburger are ready to step into his bloody jackboots and take over the show.

Its lucky that Nazi's are used to plotting against each other isnt it.

The old joke comes true again that if you stick five Nazis in one room for a meeting then within 2 hours you will have 3 new Nazi parties, 1 Special Branch operative and 1 red.

The real tragedy is that there is now no longer a telephone box on Orkney for people to order a pizza from the mainland.
Posted by Defender of Liberty at 08:58

I thought it was Sadie for leader? Kenny wont like that.
Well the blog and its Red supporters at a Scottish blog in Aberdeen only have a few comments. People are getting bored. Its the same old bile, pathos and pleas for understanding one minute hatred and insults the next.If it wasn't for the Left posting away it would have died. One funny development is the support of Sharon Ebanks.

Hey Barnes boy so you can copy and paste, do you get to use crayons next week at your mental home,

this fucking government should never have created care in the community.
from mental cunts like you.

It appears that the nation is experiencing a shortage of lithium, lets hope the supplies arrive soon.