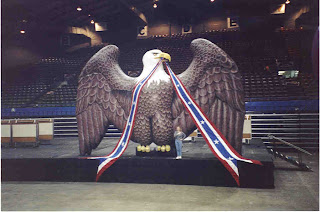 I saw an eagle fall, a poisoned arrow
Fired from a bow of gold, sunk deep into its chest,
The mighty wings then crumpled,
And it fell as a black stone to earth,
As Lucifer fell from the heavens,
Screaming with the death cry of Liberty.


I saw an eagle lain dead in a nest,
It wings were deformed and could never have flown,
It lay abandoned, as pitiful as all futile hopes,
Addled in the egg, its thin shell cracked,
Its future had been poisoned by the water,
As the legacy of politics and enterprise.


I saw an eagle raised as a standard,
With wings of silver and eyes of fire,
It was fed with gold and worshipped with war,
As it led new legions from a New Rome,
Towards a bright new promised future,
I saw the sun darken with fear.


I saw an eagle fall in flames,
As Hubris wept and Nemesis laughed,
Its burning wings set fire to the West,
And then the whole world itself,
At the end of an age, at the end of an Empire,
Comes the banquet of consequences.


I saw an eagle alone upon its mountains,
Its eye fixed upon its kingdom only,
Hunting only its own prey,
The sun arose behind it as a golden crown,
And as it spread wide its effulgent wings,
Screamed forth the birth cry of a new world.

Posted by Defender of Liberty at 07:25

Somewhat OT Lee but Obama is an interesting character from a biblical viewpoint.

He is a man of mixed race with a lot of personal charisma and popular appeal that has transcended racial identities.

His religion appears also to have crossed boundaries.

He, I think therefore, is as near to the final biblical antichrist, in type, that I have observed so far, Revelation 13. I don't think he is that particular individual but regardless of the election outcome, I believe he is worth monitoring.

My impression is that KJB-believing America probably won't vote for him but they are an increasingly beleagured minority. I suggest that if BO is elected, his administration will take up where Janet Reno left off. If McCain wins, things will be somewhat easier in that respect, especially with Governor Palin as VP - she seems to have support from the KJB believers.

Much of Obama's is of course endorsed by prominent Hollywood (Hellywood) heavies.

Which isn't surprising, either.