Rise Up Against The Red State Goons 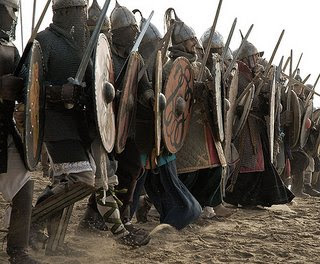 For those with insight it appears that we are witnessing a co-ordinated campaign against the BNP involving the government, trades unions, security services and the red goons of the far left.

In the last three days we have seen ;

2) On Monday the attempt to get Aam Walker debarred as a teacher - which failed.

4) The BBC website is now putting up articles about the Employment Bill going through Parliament and the unions are demanding the right to sack BNP members.

The leak of the list came from the Voice of Change people, we know that.

But I also know that the people in the Voice of Change are not stupid enough to let this list go public.

Therefore we have to demand from the Voice of Change people the names of those that they passed the list too.

I know that Kenny Smith and Steve Blake are not stupid enough to do this leak - but I know that the person they passed the list too, who we already suspect is Sharon Ebanks, has worked with the Lancaster Unity and the Police in the past.

We also know that Sean Hadley and John Holloway, who run a pathetic nazi site, are also linked with the leak.

It appears that the VoC people when angry last year passed the list to other people.

We now have to know who they passed the list too so we can give those names to the police.

One of the persons they passed the list too has passed a copy to Searchlight and then Searchlight have leaked the list on the internet to coincide with the Employment Bill passing through Parliament at the moment.

The leak of the list , with its names and details of the many people in our society who are not the stereotypical skinheads as the media idiots like to peddle as a myth to the gullible masses, was done in order to terrify the weak kneed, hand wringing liberal MP's to pass a tighter Employment Bill. The fact that the list reveals that our members are from across the spectrum of sicety will be used to coerce the MP's and Lords to tighten the bill with loud hurrumphs by various ethnics and labour Lords that ' The BNP are everywhere and are not just the typical brutes in suits , so we need real Stalinist powers to EXPEL, EXPEL EXPEL them all ha ha ha ha ! ".

You can just imagine the scene as various ermine clad socialists and ex-communist revolutionaries appointed by the government all cackle and huddle together to try and usurp our democracy with visions of the BNP hiding in their lofts and in the upper ranks of the trades unions.

The raids this morning suggest the same modus operandi of some pathetic MP, probably Cruddas , putting pressure on the police to issue raids to reinforce the pressure on the BNP.

The plan was obviously ;

4) Get the BBC to publicise the people on the list to terrify the people in the Lords to pass the Employment Bill amendments.

This is the same sort of thing that used to occur in Northern Ireland all the time.

Ever wondered why bombs used to go off in Northern Ireland just before any big conference or that bombs used to go off outside the offices of Loyalist and Republican parties so the fire brigade, and security officers dressed as firemen, could rifle through the documents.

This whole state of ffairs as regards the recent events is classic 'spooks' all over it.

The real reason why this is happening is because a report will have been drafted up explaining that the BNP will benefit from the credit crunch economic downturn.

Therefore the spooks and their government lackeys will have sanctioned a 'dirty tricks campaign' against the BNP in order to destabilise the party.

This series of events is also further confirmation of the fact that one of the rebels was a security service asset.

By expelling them we have now had to suffer their Plan B.

This is the Plan B destabilisation process.

What we need to do now is demand a public inquiry.

This is a classic spook operation and from the line of the ones that used to occur in Northern Ireland.

It shows they are afraid of us.

It shows that they know the BNP are a dynamic, growing force and political power in our country - and the traitors, crooks and degenerates that run this country are afraid - very, very afraid.

It is now incumbent upon the VoC people to give us the names of the people they passed the list onto.

If they are genuine nationalists they will give us the names so we can hunt down the filth that passed the list onto searchlight so as we can get them prosecuted and arrested.

If they are involved in this plot then they will deny they passed the list to anyone - when we know from looking at the list that it was the last copy of the list they receieved in their roles as party officers.

The fact that the government, the security services and the unions work with red thugs that issue death threats to out people is not news to us - but it reveals to us that the entire British state is a poisonous corrupt monster that needs radical realignment.

The timing of this is also timed to coincide with membership renewals, and is designed to stop people joining the BNP.

I suggest that those of you who are worried do this - donate to the BNP the money that you would have used as a membership fee.

Give the BNP your money and then a larger donation as usual so that e can build up a fighting fund to take on the government and its cabal of thugs and crooks.

Give us your money - the BNP online donation system is secure and 100 % confidential and can be used to give us the money we need to take on this corrupt system.

The way to defeat this plot is to simply keep fighting - just as our ancestors had to keep waging year after war through the mud and blood of the Somme and Flanders, through the Blitz and the war - KEEP ON FIGHTING.

Surrender is not an option - give us the money we need to fight back.

For those of you who fear being attacked at work by this leak , then if you give us your money then we can pay for solicitors and legal teams to help those who are attacked at work.

The more money we have - the stronger a defence we can build.

IT IS TIME FOR THE SHIELD WALL TO HOLD.

This is the last throw of the dice for the government and their pet spooks - and they know it.

Give us your money - and we can give you our country back.

The time for the resistance is now - it is time to stand up and be counted.

On our own we are vulnerable - but united we are invincible.

It is time for us all to stand together as one and face down all those who are the enemies of our people and nation.

That hour is now.

Posted by Defender of Liberty at 01:46

Thanks for the tips people,