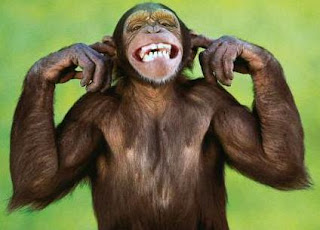 I have decided to launch this years award for The Media Monkey Of The Year, a little early this year. Rarely in the history of journalism has a media monkey made as much of an impact as this man.

His latest work is a total delight.

Now many of my loyal readers will know that I posit a theory that modern politics is merely an extension of finance.

This has been confirmed in my previous articles where I revealed that The Guardian newspaper is run by Hedge Fund Traders who made millions out selling short shares in the credit crunch.

Now this has been further confirmed by the article by Stephen Pollard in The Times about the attempt by the government to allow unions to have new laws that allow unions to expel people on virtually any pretext.

The fact that The Times is a newspaper of the Rupert Murdoch stable and is the main stream mouth piece of the global capitalist elite in the heart of the global financial system, the city of London, and is now supporting the rights of the Trades Unions to expel members of the BNP is yet again proof that the capitalist corporate elite control both Left and Right of the political system.

The Guardian and The Times both support the right of trades unions to expel BNP members.

The Trades Unionists and the Big Bosses all agree on the right of trades unions to expel the BNP.

The capitalists and the socialists are one and the same.

The trades union are stooges of the capitalist elite. They are traitors to the British Working Class and lackeys of the globalist capitalist system.

Stephen Pollard is a Jew. He is also a good friend of the Zionist Melanie Phillips.

Now ordinarily the ethnic identity of a media monkey like Pollard is irrelevant for idiocy bears no colour, yet in times it does have a direct relevance.

The race of Obama is an issue when he stands for President and so the race of Journalist is an issue in relation to what they write.

In this case what is absurd is how Pollard is espousing a position that is in fact a fascist position.

At some point in their career EVERY Jewish journalist will have mentioned their race or religious heritage at least once, usually in relation to the Holocaust, in order to morally beat someone over the head with it as an issue in the media.

The Jews are no different from any other group in society in this regard. All groups in the Multi-cultural System are encouraged to wear their 'historical suffering' in order to gain from liberal sympathy. Its just that the Jews are better organised as a community, and therefore their story gets more airtime. The Rwandans, the Palestinians, the Ukranians under Stalin and the Russians under Lenin etc etc all have their tragic Holocaust stories but dont get much air time.

Community suffering is highlighted order to gain social advantage in the Liberal parlour game of ' Atrocity Top Trumps ' where the victim group with the highest death tally can pontificate from the moral high ground in society and lecture everyone else on how they should live. Regardless of how moral they are of course.


Therefore to find a Jew and a Zionist espousing a classic Fascist position is either shocking or unsurprising.

I will leave that to you to ponder and choose.

Heres a few points for Pollard to ponder as he pauses to take a swift breath in between scoffing all the pies ;


1) A trade union is a representative body of WORKERS - it is not a body that represents politics or political parties.

2) A trade union that has an overt political agenda therefore no longer exclusively serves the interests of the WORKERS who form its body. By seeking to serve the politicians, political parties and the workers it must create a managerial elite within the union ( who must also serve not just their own individual interests as individuals and also as a managerial class ) but they must also regulate all the other factional interests of the union.

IN ORDER FOR A TRADE UNION TO FUNCTION AS A TRADE UNION IT MUST SERVE ONLY THE MEMBERS OF THE UNION AND THE WORKERS WHO ARE REPRESENTED BY THE UNION.

Anything else than that inner clarity of purpose means the union becomes nothing more than a joke held to hostage by the factions within it.

They also control all the trades unions which means the workers remain as an dead mass, and mere powerless slaves to the bankers and the political parties.


3) All the unions are funded with tens of millions of pounds of tax payers money per year in the Union Development Funding programme. In this scam that Al Capone would have been proud of the Labour government gives the unions tens of millions of pounds as 'development aid' which is then given back to the Labour Party in election times as union subscriptions from the union political funds.

What a great scam !

Back to Fatty, sorry - Pollard.

I bet old Pollard wouldnt like that would he.

I bet he would squeal like a piggy about that.

But that is the door that Pollard has opened - because someone somewhere is now having just that thought.

They will probably be some far left extremist and supporter of Islamic Jihad - and they are now going to use any law that allows the removal of an individual for their political opinions to pass such a motion.

Beware what dogs you let out the kennel pollard, because you never know if they are going to come back and bite you one day.

This is why Pollard is my Media Monkey of the year.

Not only was the article the most agonisingly boring, illogical, painfully twisted even in regards to its own position that I have read for ages, but it was also so full of bollocks that it had to get the award.

The Media Monkey Award is a prestigious award. There are many fighters for this crown.

I thought ' Mossad In Drag ' or Melanie Phillips as she is also known, would win it this year.

One day you will thank me for informing you that you are too fat and you need to get some excercise for the sake of your health.

You look like Jabba The Hut before he hit Weightwatchers - now sort it fatty.

Unions have a right to say who can join them


Tomorrow the Employment Bill reaches its final stages in the House of Commons. Section 18 of the original Bill would have allowed trade unions to exclude members of the British National Party and other racists. The Bill that will be presented to MPs tomorrow, however, has a very different version - one that would achieve the precise opposite of the Bill's initial intent. The House of Lords altered it so greatly that it now protects BNP members' union membership. Tomorrow Labour MPs will propose an amendment to restore the original section allowing unions to expel BNP members.

This is not, as it has been presented, a question of trade union rights. Rather, the issue at stake is the very notion of freedom of association. It is in everyone's interest - even, counterintuitively, that of BNP members - that the amendment succeeds, and unions are permitted to decide who may or may not join them.

In law, trade unions ought to have no greater rights than any other bodies. But nor should they, in their internal affairs, have any greater responsibilities. The law should step in only when a private body acts in a way that affects the rest of us.

When unions chose not to ballot members on strike action, the law rightly stepped in. But it ought to be no concern of the State how a union structures its private affairs. If it decides to allow membership only to workers who live in Lancashire, that should be its business alone; it is not the State's role to tell it to offer membership to workers in Yorkshire, too. Similarly, the State should not tell unions that they must allow BNP members to join.

But if it is right that unions should, as private members' organisations, be able to decide for themselves if they wish to include members of the BNP, the same should apply to all other private bodies. If a group of women want to set up a women-only lunch society, the law should not dictate that membership must also be open to men, and vice versa - so long as those groups are private bodies whose activities have no significant impact on the rest of us.

As it stands, the Employment Bill's protection of BNP members' right to union membership is another extension of state interference in freedom of association. Were the BNP a more serious organisation, it would see that this could threaten its own existence. Repellent as the BNP may be, racists too have a right to gather together. Their behaviour should only concern the law when it impacts on others.

All MPs who care about freedom of association - whether it extends to unions, clubs or racist parties - ought to support the proposed amendment to the Bill tomorrow.

Posted by Defender of Liberty at 11:27

Wow what a slimy fat lump of lard this guy is. His hypocrisy seems to know no bounds Anyway looking at him he probably has a BMI of above 40, and no doubt his blood pressure is over 180 systolic, and his cholesterol over 8,giving him a very reduced life expectancy I am afraid. Oh well.His own doctor should be onto his case nagging him day and night."Lay off the donuts lardbutt".