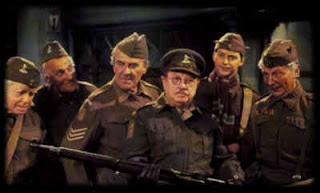 
I was thinking this morning how the people and scenarios in classic TV series such as Rising Damp would be treated today in Jobsworth Britain ;

1) Rising Damp - Mr.Rigsby has been sentenced to six years in prison for the racial harassment of a black tenant. The tenant was mocked and racially abused and the court sentenced Mr. Rigsby to a prolonged period of imprisonment. The tenant sued for 'compensation' due to distress and Mr. Rigsby's house was put on the market, sold and the profits given to the tenant as compensation. Mr. Rigsby now runs the local Tory Club.


2) Fawlty Tower - the owner Basil Fawlty, was arrested for the racial harassment, victimisation and direct racial discrimination of his employee Manuel, a catering officer from Spain. The hotel was closed down and sold and Manuel was given a large lump sum for his suffering and distress by an Employment Tribual.


3) Steptoe and Son - the Health and Safety Executive visited the site of the scrap yard and found many health and safety violations. The site was shut down as a public safety threat and the Steptoes were fined a hundred thousand pounds. The site had to be sold to pay the fine and is now a community centre for African lesbian refugees run by the local Labour council.


4) Dads Army - due to the racist nature of the unit, its frequent disparaging of Germans, its xenophobia and fear of Germans and Germany and the use of weapons in parades in breach of health and safety rules the unit was closed down and replaced by a weight watchers meeting who used the hall instead of the Home Guard. Local members of Unite Against Fascism made formal complaints to the local Race Relations Council against Mr. Mainwaring for his frequent racial abuse of Germans at his meeting and Mr. Mainwaring was arrested and fined. The Home Guard unit was replaced by a local unit of volunteers who have offered to supervise any invasion of the town and ensure that the German invasion is done with as minimal inconvenience to the public as possible. The local council have set up signs in German to assist the movement of German tanks through the town and the local council have provided land for the Germans to camp and cook. Local race relations officers will patrol the town with the police to ensure no 'anti-german' posters and slogans are graffited to walls.

Local copper PC Jim Brownnoser said ' We intend to impose a zero tolerance policy as regards any anti-german racism, and we are warning the town that any anti-german partisan activities will result in arrest and a prosecution for racism. This town welcomes the Germans and their contribution to our Multi-Cultural society'.

Unite Against Fascism volunteers have put posters up around the town saying 'Welcome To England - we are not anti-German ' so the invading German army will not feel isolated and unwanted in the local community.

Local UAF leader Rainbow Moon Cloud Mufflicker said to the local paper ' We are anti-fascist not anti-German and we feel that the demonisation of all Germans as fascist is not on. We intend to welcome the Germans and then offer them classes in yoga and crystal healing so that they reject fascism and become just like us '.

Rainbow Moon Cloud Mufflicker was last heard of being tortured in a nazi death camp somewhere in the south east of England after the nazi invasion and occupation of Britain screaming out to her nazi SS captors ' You can kill me but my crystal auric energy field will surf the silver moonbeams of eternity forever as a dolphin '.


5) Love Thy Neighbour - the white family were arrested for racial discrimination and abuse of their neicghbours and the father thrown into prison. The house was repossessed by the council and is now occupied by a Muslim family of refugees. In prison the father converted to radical Islam and was later arrested for attempting to bomb a strip club in Durham. He now sits on a Labour government ' Anti-Extremism' board teaching young muslims that terrorism is not nice. He currently earns a hundred thousand pounds a year and runs a mosque where Tony Blair visited last year.


6) The Good Life - due to repeated violations of council by laws concerning the keeping of animals, the use of the land for farming without planning permission and noise caused by chickens the family were evicted and the house sold to pay the council legal costs. The house is now occupied by a family of Polish homosexuals. The family were last seen living in Spain.

7)Man About The House - the two women involved in the legal case took a case on for sexual discrmination and harassment after becoming lesbians. The man was evicted and arrested. The house is now occupied by a lesbian collective. In a strange turn of events after leaving prison the two girls contacted him and asked for him to become a sperm donor and he is now the proud father of three children - Obama , Oprah and Trotsky.

8) On the Buses - the bus drivers were sacked for sexual harrasment of female staff and passengers. Their lewd comments and crass sexual innuendo resulted in a formal disciplinary hearing and their sacking. They are both now unemployed. They have been replaced by Polish drivers paid half their wages.


9) George and Mildred - after being fired form his job in order for his employer to bid for a council contract which required they have at least ten per cent of staff from an ethnic minority, George who was a middle aged white man and therefore irrelevant to modern Britain, committed suicide. Mildred was evicted from the house as she could not pay the mortgage rise from Northern Rock and is now living in a caravan site in Newcastle.