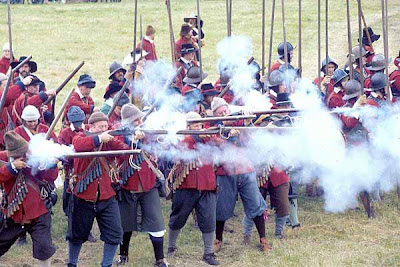 Oh, to have been born amidst the crucible,
During those days of the eagle,
And to have passed through the fire,
Of those sacred hours of redemption,
To have lived, loved and fought,
When Liberty first awoke in England,
And roared ’Arise’ to all free born men,
Loud as lion freed from its cage,
When heroes dared spurn the yoke of slavery,
And threw down the rusted chains,
Of craven servility and servitude,
That bound them to despots and popinjays,
And the whims of fops and traitors,
Who put pomp, power and profit,
Before the Constitution, the Nation and The People.


To have walked abroad in Albion,
When the tumult of civil war,
Shook the very halls of heaven,
And turned the world upon its axis,
When the angels took up our banners ,
And marched at arms in England,
In order to build a New Kingdom,
Upon the rubble of redemption,
And to have witnessed the humbling of a king,
Whose hubris whetted the edge of an axe,
As youth reached for wild honey,
And sated its desires with fingers wet,
With the sweet taste of freedom.


To have felt the fiery breath of cannon fire,
Close upon scorched skin,
And to have borne with bravery,
Alongside comrades and kin,
The clash of arms, the shrapnel slash,
The stab and crash of mortal combat,
Upon bloody fields of battle,
That immortal earth of the mind and soul,
Where visions rise and fall,
Upon that Golgotha where destiny is born,
And carnage reigns upon a white throne of bone.


To have hefted the heavy arms of sure conviction,
And brought down all falsehoods,
Beneath the blows of true justice,
Then watched as the walls of tyranny fall,
Ravaged and pocked with shot,
As the levelling of the land began,
As a sickle that sweeps the corn,
So that men born free, can be free again,
And not live their lives at the whim of power,
That dances to the tune of treason,
And wages war upon the people.


Who but the blessed walked abroad in Albion,
Amidst that New Jerusalem,
When men were great as gods,
Gilded with garlands of glory,
As the mighty eagle of revolution,
Flew forth upon the rising wind,
Screaming with the thunder of freedom,
As a blessed herald of rebirth,
Carrying forth between its talons,
That golden sun disc of flame and fire,
The summer sunshine of victory
Effulgent into eternal history,
Ushering in precious liberty for England,
And a sunrise that must never set.


When liberty laid siege to tyranny,
The cannons were lit with tapers of law,
and statutes torn from traitors books,
And war let loose quenched its sacred thirst,
Upon warm rivers of red blood,
That flowed from the Palace down to every street,
And there amidst the chaos and the killing,
Hope first raised its mithering maw,
Amidst drifting cinders and gunpowder mist,
Fragile upon fields of blunted sword,
And gorged as a wolf upon the fallen,
Whose red meat laid rutted in the mire,
As ravens rejoiced and widows wept,
And a crown fell so that a people may live.

Posted by Defender of Liberty at 09:07

Don't forget to remind them of the support we have for the partys policies as demonstraited on SKY news,

only media stigma was holding us back from the popular real center ground, yet inspite of this the people through alternative media such as the net can now see the truth for themselfs.

So don't take any of their nonsense that we are not a popular party with popular support for policies but suffer due to a media conspiracy to demonise us.

proof of a media conspiracy -

such as the union for journalists, say we must only be reported in a bad light.

try and get that one in as it will show the press to be hypocrites and the unions to be totalitarian and fascist in nature.

This is a fact that the public will not be aware off and this little nugget should be dropped on them.

They will say, `well your having your say now` but you will have to remind them that the debate is discussing on whether we should have any say, the fact that we are even having such a discussion shows the level of control the goverment has asserted through the media.

and why such a wide panel? no doubt it will be all anti's against you with just the odd muttering about free speech but all condeming the BNP.

a fair debate would be a one on one, it's just another set up in the witchunt, but the problem they will have is the same problem they have with Nick, your far too clever for them and they will underestimate you.

empathy -
also play the protection od amazonian tribes angle, you need empathy from a brainwashed crowd, they cannot empathise with a native Brit perspective no matter how hard you push it so you have to draw the empathy from where it is pushed by the mainstreme and turn it around on itself.

bold -
one small tip, make sure you speak up and be bold but not brash, take all the airtime you can get, steal it from the others in a bold and comanding manner.

weak -
play it humble and they will walk all over you, they will not let you get a word in edgeways after your initial blurt, which they WILL interupt.

beat them at their own game.