The Return of Guns and Roses - The Outlaw Returns 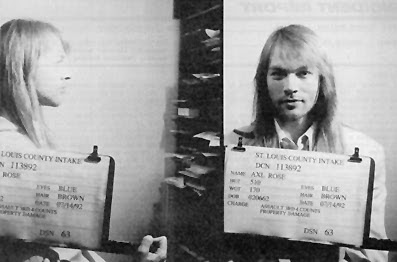 There are some albums that when you play them you know they are merging with the musical DNA of your soul.

The return of Guns and Roses - Chinese Democracy - led by the genius Axl Rose is an album that captures the Zeitgeist.

As he enters middle age the AppolLonian youthful rockstar must make the transition from satyr to poet, as must a meteorite slip from the effortless drift of space and make the journey into fiery materiality.

Most of them are destroyed by this process, and very few meteors make it to Earth.

Few make the transition into the Dionysian without death or darkness.

Chinese Whispers reveals that Axl has broken through to the other side.

He is now an Elder Of The Tribe, and must be given due honour as such.

This is a album of epic status - it is the musical equivalent of a Californian Psychedelic Blitzkreig.

It is the album that Charles Manson would make if he wasnt in Prison.

If you thought that My Chemical Romance were the heirs of Queen with the symphonic epic rock album The Black Parade - this album makes The Black Parade sound like a garage band acually playing in a garage.

With instruments made of paper.

This is more than an epic, this is a historical document in its enormity.

I would suggest that this album represents the point when to go any further would only drift off the edge of the musical abyss into pomposity and pastiche. Yet this album rocks.

Its the sort of album you will play when the missues goes out really loud on the stereo doing frantic air guitar whilst ensuring the curtains are fully drawn.

It is like Axl has spent seven years on musical steroids pumping up for the power chords and riffs in this album.

The production is superb, the mood of the album is like an album of Love songs sung during the apocalypse, classic Californian angst, self loathing, decadent excess combined with Fin De Seicle nihilism - it symbolises the fading of the flower of the Californian Dream as it drifts into chaos and psychosis.

Axl is the prophet of the end of the hegemony of the US Imperium that has dominated the last half century.

Chinese Democracy is itself a phrase symbolic with the death of US Eagle and the rise of the Chinese Dragon.

This is like the Nine Inch Nails album Year Zero had been remixed by Freddie Mercury himself, or Led Zeppelin remixed by Jim Steinman under the influence of peyote rose.

Imagine ' Capital G ' with an orchestra playing along to the track whilst tanks blast each other to bits with .50 calibre armour tipped machine guns, flamethrowers and atomic missiles.

Ok that may be a bit over the top, but you get the point.

It now ranks alongside the Scars On Broadway album as the best two albums of the year. They cannot be seperated these two albums, for they are two albums that need to be heard together - first Scars on Broadway and then Chinese Democracy. Both capture the Zeitgeist, in that the Scars album is the darkness that is coming and which follows the dusk, whilst Axls album represents the final flowering of the fading light at twilight for the American Dream, when it blushes in scarlet, crimson and gold atop the West, glimmering with celestial fire and starshine just as it slips into the dark womb of the West.

It is the album that reflects the beauty of the rose at the very moment when the grasp of death has chilled its stem and the flowers commence their wilt, and the fading petals are preparing to fall to earth.

It is poignant with its foreboding, as though dominated by a dark spirit that is the prefiguration of an epoch coming to an end.

It is the slickest album of all time - the soundtrack to a summer evening drive with the top down and the warm wind slipping through your hair, which ends up with you driving down a dark desert highway which is policed by Mad Max cops in interceptors as cities burn in the distance all around illuminating the horizon with the sky scorching fires of Ragnarok.

The return of Guns and Roses - Chinese Democracy - led by the genius Axl Rose is an album that captures the Zeitgeist.--DOL

But it's never the same unless all the original members are present. One member cannot return since he had a really bad stroke.

the album is anything but boring, which is of upmost importance when making one. But it is sad to hear after every + 5min epic that axl's vocals, rediculasly layered, continually battle the accompaniment, in such a way the tone colour of the music never really changes, which is a shame because there are many good ideas that aren't built on, like it is ten years of random ideas peiced together.

this is a good reveiw, but kinda ignores the music itself, n focuses on its impact on society, of which i doubt will be huge

Why do so - called nationalists support heroin addicts? You buy their records and finance their junkie lifestyle. This in turn, finances their dealers. All modern music was created by Jews like Phil Spector and Alan Fried, and not white nationalists. Yet you and others support this alien Jew crap. It’s not a natural progression from Mozart or Beethoven. Its part of Herbert Marcuse’s (Frankfort school) attack on western culture. “Western culture had to be destroyed before Marxism could triumph,” said Marcuse. Yet you so - called nationalists have missed this. Infact, you encourage it.