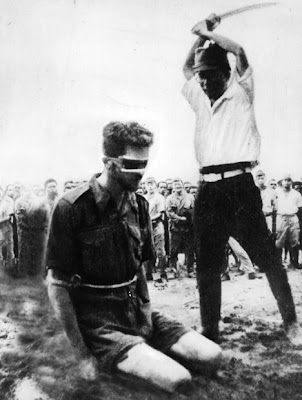 Great article from the LA Times about the use of the Holocaust by Zionists and Jewish activists for their own reasons.

Two of my uncles spent years in a Japanese Death Camp, Changi Prison, after the Fall of Singapore - http://www.historylearningsite.co.uk/fall_of_singapore.htm - and yet the British Holocaust is never remembered EVEN DURING THE HOLOCAUST DAY COMMEMORATIONS !

Why are we commemorating the Shoah when we ignore the Japanese Holocaust of British Citizens ?

Note the statement " Israel must rethink its strict law of return (which defines Jewishness the same way Hitler did), ".

Yet why is it that the media never point this out or call those who do point it out 'nazis' or 'anti-semites'.

The phrase anti-semitic has become a trite cliche, a Zionist variant of the Marxist-Leninist Terrorism of the Word - another terrorist weapon to usurp free speech along with ' racist , 'nazi', 'fascist' etc etc.

Have you noted that those who most use the words fascist, racist etc as an ad hominem attack are those that invariably the REAL fascists, the apologist for Islamo-Fascism and the racist excesses of Kosher Nazism Zionism.

It is time that the Holocaust Remembrance Day was a day where our war dead are remembered, it should not be used a mechanism for the inculcation of a guilt complex that allows Zionists to carry on with their fascism in Israel.

The deeper we are stuck in our Auschwitz past, the more difficult it becomes to be free of it.

Reporting from Nataf, Israel -- Even today, when economic storms are shaking markets around the world, posing a threat to the stability of entire countries and societies, Israel continues to conduct its business far from the turmoil, as if swimming in a private ocean of its own. True, the headlines are alerting the public here about the crisis, and the politicians are hastily recalculating their budgets. But none of this is dramatically changing the way we think about ourselves.

To Israelis, these issues are mundane. What really matters here is the all-important spirit of Trauma, the true basis for so many of our country's life principles. In Israel, the darkest period in human history is always present. Regardless of whether the question at hand is of the future relations between Israel and our Palestinian neighbors in specific and the Arab world in general, or of the Iranian atomic threat and Mahmoud Ahmadinejad, it always comes down to the same conversation. Every threat or grievance of major or minor importance is dealt with automatically by raising the biggest argument of them all -- the Shoah -- and from that moment onward, every discussion is disrupted.

The constant presence of the Shoah is like a buzz in my ear. In Israel, children are always, it seems, preparing for their rite-of-passage "Auschwitz trip" to Poland. Not a day passes without a mention of the Holocaust in the only newspaper I read, Haaretz. The Shoah is like a hole in the ozone layer: unseen yet present, abstract yet powerful. It's more present in our lives than God.

It is the founding experience not just of our national consciousness but of more than that. Army generals discuss Israeli security doctrine as "Shoah-proof." Politicians use it as a central argument for their ethical manipulations.

The Shoah is so pervasive that a study conducted a few years ago in a Tel Aviv school for teachers found that more than 90% of those questioned view it as the most important experience of Jewish history. That means it is more important than the creation of the world, the exodus from Egypt, the delivering of the Torah on Mt. Sinai, the ruin of both Holy Temples, the exile, the birth of Zionism, the founding of the state or the 1967 Six-Day War.

The Shoah is woven, to varying degrees, into almost all of Israel's political arguments; over time, we have taken the Shoah from its position of sanctity and turned it into an instrument of common and even trite politics. It represents a past that is present, maintained, monitored, heard and represented. Our dead do not rest in peace. They are busy, active, always a part of our sad lives.

Of course, memory is essential to any nation's mental health. The Shoah must always have an important place in the nation's memorial mosaic. But the way things are done today -- the absolute monopoly and the dominance of the Shoah on every aspect of our lives -- transforms this holy memory into a ridiculous sacrilege and converts piercing pain into hollowness and kitsch. As time passes, the deeper we are stuck in our Auschwitz past, the more difficult it becomes to be free of it.

What does the primacy of the Shoah mean in terms of our politics and policy? For one thing, it becomes virtually impossible to find a conversation carried out with reason, patience, self-control or restraint. Take Iran as an example. With regard to Iran, as with any other security matter that has potentially existential consequences, we have no thoughts at all -- only instincts and trauma-driven impulses. Who has ever heard of alternative approaches to the Iranian issue, of strategic arguments underlying the passionate emotions, the old fears and violent rhetoric?

Few people in Israel are willing to try to perceive reality through a different set of conceptual lenses other than those of extermination and defensive isolation. Few are willing to try on the glasses of understanding and of hope for dialogue. Instead, the question is always: Is a second Shoah on the way?

This is one of the strongest reasons why I voluntarily withdrew from political life in Israel. I couldn't help feeling that Israel has become a kingdom lacking in vision and without a prophetic horizon. On the surface, everything is in order; decisions are carried out, life moves on, the ship sails along. But where is this movement heading? No one knows. The sailors are rowing without seeing anything; the lower-ranking officers are holding their eyes up to the leadership, but the leaders are not capable of seeing past each coming, rising, tumbling wave. No one is looking ahead, searching for a new continent. Instead, we are looking backward, held hostage by memory.

I cannot be an accomplice in such a way of life, with no spiritual compass or moral direction. Never -- or so I've been taught from infancy -- have the Jewish people existed only for the sake of existence; never have we survived only in order to survive; never have we carried on for the sole purpose of carrying on by itself.

Even the Zionist idea was not merely an attempt to rescue the Jews from violent anti-Semitic prosecutors, but rather was a heroic attempt to establish a model society. Zionism meant to create a society that avoided any form of discrimination or oppressive policy toward non-Jews, of the kind under which Jews had suffered for more than two millenniums.

This utopian vision has fallen silent in Israel. Concerns for personal survival and well-being, as well as fear about the ongoing bloodshed and security emergencies, about Gaza and Iran and the realities of demographics and population, have silenced the moral debate and blocked the horizons of vision and creative thinking.

I believe Israel must move away from trauma to trust, that we must abandon the "everything is Auschwitz" mentality and substitute for it an impulse toward liberty and democracy.

I fully understand that this will require a slow process of change. It will take more than one or two years for a new Jewish humanism to be accepted, allowing Israel to become a less traumatic place, a country in which school trips do not only present Israel's high school students with extermination camps. Israel must rethink its strict law of return (which defines Jewishness the same way Hitler did), its relationship with Germany, and it must reaffirm its commitment to being a democratic state of the Jewish people, a state that belongs to all of its citizens, in which the majority decides on its character and essence, with the utmost sensitivity to all the "others" -- and especially the Arab non-Jewish minority.

I have a vision of Israel as the driving force behind a global peace process and worldwide reconciliation and as a society guided by a deep sense of responsibility to world justice, but it's difficult to accept this vision when we are confronted every day with the hardship and perpetual bloodshed reflected in our newspapers. My hope is for a Jewish people that insists "never again" -- not only for Jewish victims but for anyone who suffers around the globe today.

Avraham Burg, former speaker of the Israeli parliament, is a businessman and author, most recently, of "The Holocaust Is Over; We Must Rise From Its Ashes," published this month by Palgrave Macmillan.

Posted by Defender of Liberty at 04:27

The way the jews bang on about "the shoah" makes me vomit.

As always the fact that "the shoah" wasn't just about jews is ignored. There were it is estimated, 4 million other victims: gypsies, communists, christians, and not forgetting the metally ill who before they died were subjected to some of the most agonosing and inhumane tortures. That distressing clip of the poor man in a sound-proof room being subjected to intentse levels of noise being one example I can never forget.

The jews lost 6 million, allegedly. But although this is indeed genocide, it pales into insignificance when compared with other acts of genocide.

Stalin and Beria are reputed to have killed 100 million of their own people. I think around 30 million died in the "Great Patriotic War" to repel the Germans from the former USSR.

Since Islam arrived in India, 80 million hindus have been killed in a jihad still being waged today. God knows how many "kuffar" died under Ottoman rule and I have no idea what the grand total of souls taken by jihadis is - and counting. I think it may well be a tad more than 6 million.

There's the genocides in Africa including the ongoing one against the whites and the boers in South Africa that the jew owned media never talks about, Mao's genocide against around 5 million of his own and let's not forget the Armenian genocide when the Turks butchered 1.5-2.5 million Armenians.

But what grates the most Lee is the jew-owned media sell-out of the Serbian people. A people whose persecution by the KLA and Albania has been silenced and yet the Serbs stand accused thanks to the jew-owned media of the genocide in Srebrenica, a genocide that never took place and that the US government and the western media knowinngly fabricated to justify their illegal war against Serbia.

Like I say, hypocritical jews who continually harp on about the culpability the west has for "their" terrible little holocaust make me vomit. They're hands aren't as free of innocent blood as they like to make out.