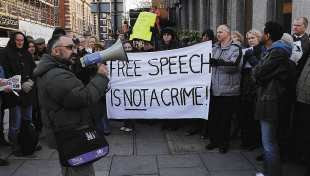 This has to be the ultimate definition of hypocrisy.

UNISON are one of the leading trades unions seeking to ban the BNP from union membership.

DEMO: Union members take their protest to the top.

RACISM allegations made against trade union leaders have sparked a protest in central London.

Onay Kasab, secretary of Greenwich Unison and Bromley secretary Glenn Kelly were due to attend a disciplinary hearing at the London Hilton in Edgware Road, on Monday.

More than 50 union members picketed outside Unison's Euston headquarters to protest their innocence.

The hearing was later cancelled for the third time.

Unison's National Executive Committee claimed a leaflet distributed by Mr Onay and Mr Kelly was racist because it depicted the three wise monkeys.

The leaflet was distributed in 2007 to ridicule Unison leaders for supporting the Labour Party financially whilst public sector workers faced a series of below inflation pay rises.

Mr Kasab said: "The Labour Party is continually attacking the public sector at national and local level by refusing to pay decent wages.

"The idea that it is racist is ridiculous. We think this is really a political hunt for Socialist Party members."

Unison council workers across the country went on strike for two days last July after being offered a 2.45 per cent pay increase.

Supporters of the accused have set up a campaign to 'defend the four,' taking their plight as an example of a political witch-hunt damaging the union's fierce democracy.

Their campaign has received the support of political satirist Rory Bremner who said: "On the face of it Unison are about to make themselves the laughing stock.

"They need to be very aware of the widespread ridicule this will attract and think again before the papers get hold of this and make them look foolish and authoritarian."

An ultimatum was given to Unison General Secretary on Monday, warning that a legal challenge would be served for political discrimination should the proceedings continue.

Four people have been accused of racism over the monkey cartoon. Allegations against a fifth unionist were dropped.

For more information from supporters of the 'four' visit www.stopthewitchhunt.org.uk.

Unison will not comment on the coming case. A replacement hearing date is yet to be set.

Posted by Defender of Liberty at 08:04

The use of the 3 Wise monkeys is clearly racist, xenophobic and possibly Islamaphobic, as well as sexist and homophobic.
Its time these Unions got to rips with the evil Whiteys at the top (never black or minority or female/gay/TRG?
I'm sick of it.
BTW Barnes rot in hell..you're an ism something arent you?
Cant recall, but F U anyhow.