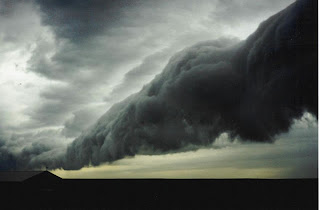 I wrote this a few weeks ago after a massive storm where it appeared that figures were moving in the rain moving towards the East. They reminded me of soldiers moving from the battlefield.

The storm arrived in the afternoon,
Ushered in from the angry East,
Brought forth before a black battalion of cloud,
That marched in silent array across the sky,
As an invading army beneath a banner,
Of shadow and sacrifice unredeemed,
Then it reared its head high into heaven,
And bellowed defiant before the trembling gods,
Demanding entrance and an audience,
To plight its troth and plead its case.


Upon an altar of slick air its ire rose,
Punching as a fist into the sky,
As a hush trembled the treetops,
Scattering the leaf from wilted twigs,
And gathering in gulls from the Thames,
That mustered with effortless ease,
Screeching upon torrents of twisting air,
Beside fresh shed leaves lifted upon the wind,
Flocking as vultures over fresh dead.


Then a shroud fell upon the face of the day,
And the whole sky lay fevered with a fire,
That flickered with lightning flash and spark,
As phantoms moved amidst the gloom,
And milked the udders that pendulous hung,
From the bloated black belly of cloud,
Gushing with gouts of misty hail,
That gathered in the gutters beyond counting,
Pale as sun bleached bones in the ebb of war,
Whilst seething columns formed in the distance,
Endless ranks assembling in solemn silence.

The shell bursts of thunder drew overhead,
As the artillery crash from distant guns,
Whose arcs of fire were calculated and corrected
Bombarded the very ground beneath my feet,
As the tempest unleashed all its weapons,
Upon both earth and heaven at the same time,
Spitting the shrapnel of rain upon the earth
Hard as iron filings, scourging the flesh,
As wild rivers ran, sinister in their sudden torrents
Slouching lupine over the dying sun,
Feasting upon the fear of women and children,
Who huddled in bedrooms beneath the covers,
Hiding from the howls of wind and rage.


Then I watched a line of giants appear,
As if staggering back from a battlefield,
Out of the murk and the rain they came,
Supporting each other by the shoulders,
Brothers in arms, united forever,
They walked as wounded warriors,
Across the bridge that death provides,
Limbless on crutches, blinded and broken,
Marching from East to West,
They followed the dying sun as it withdrew,
And I saw the halls of heaven open before them,
And the angels wept to see such loss,
Youth gathered from the garden,
That war delivered and put upon the cross,
Yet each step they took forward I saw them heal,
Their limbs reform and bones regrow.


I saw them parade, untold millions in all,
The like of which the world will not see again,
Marching into eternity with their heads held high,
Giants whose deeds are long forgotten,
The restless spirits of our ancestors,
The heroes of our blood and nation,
I saw Celtic warriors in wild bear skins,
Wode painted upon their tattooed bodies,
With war tresses and long black beards,
Hefting bone blunted axe, sword and spear,
Still wet with fresh Roman blood,
Then followed in line by Viking giants,
With eyes of pack ice blue,
Sea wolves and ocean roamers,
Who made this land their home,
And carved a kingdom from the forests ,
Then came the noble Saxon lords,
Whose blades brought freedom to England,
And whose legacy are our laws and rights,
Then I saw the ranks of two world wars,
Faces I knew and who knew me,
Untouched by time they were young again,
Laughing as boys before the war,
Their limbs restored and youth regained,
On and on they came, from every field,
The sons and daughters of friends,
I had watched grow from boys to men,
And daughters bloom into perfect beauty,
Brushing the dust of the desert from their tunics,
And laughing with the promise of new life.


I watched in silence until the storm passed,
And the vision slowly faded,
The air was fresh again, purified,
And the past felt exorcised,
The dead had passed on,
But their bravery remained,
To shame all those that break faith,
With debts that can never be repaid.