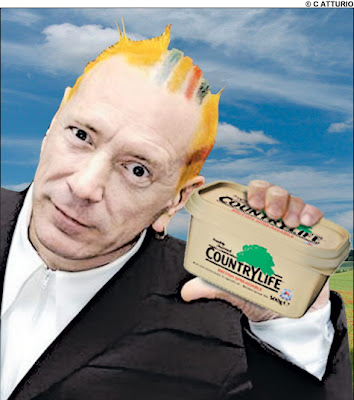 Image - I fucking love money me. I will pimp my arse to any corporation for a few quid.

John Lydon of The Sex Pistols, Public Image Limited and corporate whore of Country Life Butter has had a pop at the BNP.

I guess he needs to lick a few media arses now that he has a new tour.

Lydon epitomises the modern tragedy, his life charting the fall from revolutionary firebrand to corporate whore.

The path from punk hero to panto dame is an easy one.

First you make a few quid, then you get used to people kissing your arse, then you start enjoying the money and fame - and then you sell your soul and become another plastic joke.

This is why I despise most modern music - its fake music for fake people.

As for Lydon - he talks out of his arse.

Lydon says 'Britain is an island and benefits from immigration' - but today we have so much immigration that Britain is now a people carrier not an island that can feed and take care of its own people.

Our national BRITISH culture is dying from multi-culturalism and idiots like Lydon want to fuck around on stage regurgitating songs from the early eighties as a way to tranquilise our people with inane pop culture and the opiate of nostalgia.

The idea that immigration has made Britain a 'better place' is a statement that could only come from the mouth of a rich, over arse licked, pompous pop star who lives in Los Angeles.

Lydon should shut the fuck up about Britain, as he aint even British anymore.

He is another ex-pat 'cosmopolitan' pop star arsehole whose loyalty is to money and fame, not people or nation.

He has become a parody of himself, the young John Lydon would despise the contemporary John Lydon.

No real rock stars should live beyond thirty.

Only those with real integrity, who are the muses of the moment and whose music defines the Zeitgeist, have the integrity to die before they become parodies of themselves.

To watch men in their fifties with dyed orange hair, trying to act like some 'threat' to the system when they are the bastions of the corporate system itself is simply embarrasing.

Any punk star who goes on a nostalgia tour is a wanker.

Anyone who goes to see them is a total fucking mug.


Our culture has become so debased that the witterings of pop stars and idiot actors like Stephen Fry have taken on significance. Instead of them being regarded as simply the pathetic glitter monkeys they are who are paid to entertain and tranquilise the masses as part of the Corporate Circus, people take these cock ends seriously.

The only real rock stars are dead.

The rest are corporate whores who make music for morons.

I would say that apart from a few people like Axel Rose, Trent Reznor, Bob Dylan and Willie Nelson, people who refuse to play by the rules of the corporate system, they are all like Lydon - corporate whores and panto dames.

Now 53, he unashamedly sports the bright-orange, spiky hair of his youth, and revels in firing off withering asides about cultural developments at home, from Gordon Ramsay (“he only got famous by stealing my Anglo-Saxon vocabulary”), and Harry Redknapp (“a dodgy car salesman”), to the BNP.

“If ever anybody got the Sex Pistols wrong, it was that lot,” he says, referring to the fascist skinheads, who appropriated the Pistols’ sound in the late 1970s. “Britain’s an island, it’s always had a constant ebb and flow of immigration, it makes it a better place. And there’s not a BNP hooligan in existence that can do without his curry on a Saturday night, right?” He laughs, scornfully. “There’s no brain challenge with these morons.”

Lydon’s own dalliances in mainstream culture have, however, earnt him equally scathing criticism: does the original punk rocker have any business starring in a TV advert for Country Life butter? He impatiently argues that such projects have enabled him to finance his PiL reunion.

Sorry but the notion that Lydon was ever a "revolutionary firebrand" is ridiculous, utterly laughable. He was always out to cheat the public and was always utterly obvious and honest about it. Lydon was never a Joe Strummer and the Pistols were not anything like the Crass. They were simple capitalists - capitalizing on and exploiting a youth culture for their own benefit and amusement.

Lydon appearing in ads to sell country-fresh butter certainly does not represent a sea-change in his core values. It's not Lydon who has changed, it is just the culture that has and therefore he has been forced to adopt different methods to achieve the same level of irony and shock value for new generations. Having a counterculture icon sell country-fresh butter in this day and age is, well, genuine Lydon and perfectly in keeping with what he was always about.