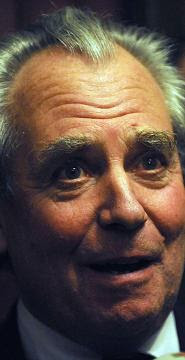 Image - Lord Pearson of UKIP, Tory and Zionist stooge. " I see God. He spoke to me and said 'Join UKIP to save the world'. Praise the Lord and Pass the Ammunition and the Bunker Busters. Yeeehhhhaaa War With Iran is now a certainty. Jeyzuz loves big bombs. Yep, I am as bonkers as a box of frogs. I also own a castle. "

What did I tell you, on day 1 in his new job as leader of UKIP Lord Pearson announces that ;

1) He and UKIP were prepared to do a deal with the Tories to close down UKIP and allow the Tories to remain in power, thereby perpetuating the rule of the conservatives

2) That the two leaders of UKIP, Farage and Pearson, are totally at odds with each other over the reality of the offer to the Tories - so one of them, Pearson or Farage, is lying or they are both idiots

3) That the plan is to stand a UKIP candidate in Barking specifically to ensure that Nick Griffin doesnt get elected into Parliament - and thereby confirming that the the role of the Zionist UKIP is to ensure that a real British Nationalist political party does not get into power and put British national interests before those of the US and Israel.


Lord Perason is either a traitor or a puppet of the traitors.

He was give his peerage by Thatcher and has been 'deployed' into UKIP in order to get the Tories into power and prevent the BNP getting Parliamentary seats.

And thanks to Lord Pearsons statement to the Telegraph, we can now prove it ;

Lord Pearson of Rannoch: did not hear back from David Cameron

The UK Independence Party offered to disband if David Cameron agreed to hold a referendum on the ratified Lisbon treaty.

Lord Pearson of Rannoch, UKIP’s newly elected leader, says in an interview with The Times today that he proposed the deal after the party’s strong showing in the European elections.

He reveals that he approached Lord Strathclyde, the Tory leader in the Lords, six months ago and asked him to tell Mr Cameron that if he guaranteed a referendum and gave the Conservative Party a free vote then UKIP would disband and its members stand down. He received no answer. Several months later Mr Cameron announced that the Tories would not hold a referendum.

Lord Pearson adds: “A referendum on a ratified Lisbon Treaty would have become about in or out, which is why the political class wouldn’t do it.”

Lord Pearson says that he was acting on behalf of his predecessor, Nigel Farage, when the overture was made.

“We made that offer but we didn’t get an answer,” Lord Pearson said. “I’m so angry with them now.”

UKIP — which has no MPs in Westminster but has 13 MEPs — wants to pull Britain out of the European Union, boost the UK’s defence budget by 40 per cent and bring back grammar schools.

Speaking after yesterday’s result, the peer, who hopes to cost the Tories at least 50 seats, said: “My ambition is for UKIP to do well enough at the next general election so that we can force a hung parliament and a realignment in British politics.”

Mark Francois, the Shadow Minister of State for Europe, said: “We don’t make policy on the basis of secret deals with other parties. We decide our policies on the basis on what is right for the country. As we have said, a made-up referendum after ratification would be pointless.”

UKIP is understood to be preparing to try to re-focus its appeal by attacking Islamic fundamentalism in an attempt to shore up its right flank against the BNP. It is planning to put a heavyweight candidate up in Barking to take on Nick Griffin, the BNP leader, in the next general election campaign and prevent him from claiming a Westminster seat.

The favourite for the UKIP nomination is Paul Wiffen, the party chairman in London.

Lord Pearson takes over immediately as party leader from Mr Farage, who had said that he wanted to stand down to fight the seat of the Commons Speaker, John Bercow.

The party intends to field 550 candidates in next year’s general election, many of whom will pay their own campaign costs. Mr Farage — who had spearheaded the party’s fundraising efforts, estimates that UKIP needs £1.5 million to fund an adequate election campaign, but about £4 million to compete properly against the bigger parties.


He is the only party leader who owns a moor, deer forest and country estate in the Highlands. Lord Pearson of Rannoch arrives for our interview clutching a scarlet briefcase embossed with a gold coronet and the initials P of R. This peer of the realm seems like the ultimate Establishment grandee.


Before the UK Independence Party leadership contest, he had fought only one election, when he stood for Pop, the prefectorial body at Eton. “The campaign’s been a bit of a shock to the system,” he says. “At Eton we just sucked up to other boys furiously and bought them ice creams. This time I’ve done six sets of hustings.”

As an education adviser to Margaret Thatcher he took on the teachers’ unions.

His aim is to cause maximum disruption at the next election. “This is the only language David Cameron understands. I don’t know how many seats we will actually win but the point is how many can we deny the other parties, principally the Tories. I hope we will cost them at least 50 seats — we may be able to force a hung Parliament, which is what I want. The political class says we must have the smack of firm government — well, that’s rubbish. I want UKIP to gum up the present political system completely so the monkeys can’t make any laws which we don’t want.”

( Hold on pearson - if Brussels makes all the laws, as you state in the article, then what is the point of 'gumming up' Parliament - only a strong Parliament can strike down EU laws, so in fact the UKIP policy of gumming up Parliament is a recipe for INCREASING EU POWER OVER THE UK as a hung Parliament means no governing party can pass legislation to restrict EU influence. Idiot )

He reveals that his party offered to do a deal with Mr Cameron to disband UKIP if the Conservatives promised a referendum on a ratified Lisbon treaty. “After we came second in the European elections in May, David [Lord] Willoughby de Broke and I went to see the Tory leader in the House of Lords, Tom Strathclyde. We said, ‘Look, we have done quite well, better than we thought, if you guarantee us a referendum on “in or out” and you give a genuinely free vote to the Conservative Party, we will disband’.


The UKIP leader has the support of the former Tory party donor Stuart Wheeler. “I’ve put some of my own money and I’ll put more — don’t tell the wife. She’s watching like a hawk.”

What do his old Tory friends think of his disloyalty to his former party? “That’s difficult. But a number of them have told me that I’m the conscience of the Conservative Party.”


This 68-year-old is uncomfortable with the pace of change. “It does worry you sometimes when you drive through parts of the country and you don’t really see a white face very much. Obviously we have got used to it and it is something we all support, but it can be pretty difficult if you live in those places and that’s where I think the BNP vote is coming from.”

The British National Party said this month that it would welcome Lord Pearson. Are there similarities between the two minority parties? “Absolutely not — we are completely non-racist. They won’t allow Jews or blacks in their party.”

( Note the fact 'when he drives through the country' on his way from his castle, private moor and after deerstalking. Wanker. Note the lie about the BNP not allowing Jews in the BNP - we allow Jews, but we ban all Zionists regardless of their race, creed and religion and after the Equality Commission case ethnic minorities will be able to join the party. And if ethnic minorities do not join the party then that will be because they are racists and have no respect for British culture and are here simply as colonists. )


Unlike Nick Griffin, the BNP leader, he wants everyone of all cultures to embrace Britishness. “The Queen’s the best thing this country’s got by miles, together with the Armed Forces and the taxi drivers.”

( Slimy little shit. Pretending to have the populist touch by dog whistling taxi drivers when you have a chauffeur driven limousine is total hypocrisy )


“When you get into that level of pain you either die or you go mad — of course that’s what most people think I did — or you have a way out, which is a very powerful religious experience. I would never say I met God but certainly I went where everything was the opposite of where I had come from.”

What does Heaven look like? “It’s total lightness and goodness and warmth and the absolutely opposite of the dark and the cold and the destructive. The powerful impression that came through at the end was that God, the numinous, call it what you will — the supreme source of light and creativity — was sad because it was losing against the opposite, which is the diabolic and the dark.”

He knew that he had to fight against the dark side. “I take on the Christians because they believe that God must inevitably win. My instruction was different, that he’s not necessarily going to win, as far as this planet is concerned, anyway, and if you look at our planet today it isn’t obvious that he is winning.”

( What did I tell you, he is another Neo-Conservative loony like Bush and Blair. Just what we need, another Zionist member of the God Squad interested in spreading the words of 'Jeyzuz' all over the planet with a sermon of bunker busting bombs and Biblical bullets. Looks like under UKIP and Lord Pearson a Zionist war with Iran is a certainty. God will be pleased knowing that the 'good' guys now have the biggest bombs that can kill more of his creations in his name ! )


Annabel’s or Boujis? Annabel’s — never been to the other one

( Anyone who has been to Annabels is a total wanker and should be regarded as a idiot, just as anyone who goes to the corporate joke that is the (TM) Glastonbury Festival, with its cash machines on site, dinner parties, corporate hospitality tents and tents with en suite showers. )

Lord Pearson is misguided in his loyalty to UKIP and, UKIP do not have the real interests of our country at heart.
If they had then they would not be standing against Nick Griffin, they would be for Nationalism full stop without letting personal hatred come before patriotism, we are doomed as a country if Labour get in next time and the only way will be to take up arms against these traitors who have set out to destroy our country for so long.