The Red Tory = another globalist idiot 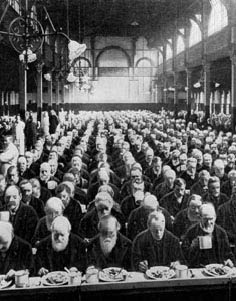 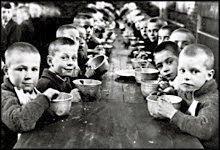 Images - The return to the workhouses under the Tories.

The theories of the Red Tory Phillip Blond are total bollocks.

He rejects Thatcherism and the neo-liberal Free Market, yet wants to put money and power into churches, community groups and the voluntary sector and thereby create a new 'Charityocracy' to run alongside the Quangocracy and leave in place the Servile State, the millions of fake politically correct jobs in the state, leave political correctness to carry on as an infection in what is left of the British state and allow these charities, community groups and other associations to remain Politically Correct, unelected, unaccountable groups exercising real power in our communities and over peoples lives.

Charities in the UK are a sick joke.

There are so many bent charities run by bent trustees who profiteer from those charities, that the mechanism of charitable giving has to be one of the most inefficient forms of social action in history.

Whilst some of the bigger charities like the IRNLI are superb charities, many of them are simply organisations run like fiefdoms for the profits of the trustees and their bloated retinue of staff.

To have tax payers money pumped into these bloated charities would be the equivalent of the private finance initiative of the Labour Party in relation to the NHS, in that it would be money used to expand the wages and staff of the charity at the expense of people who need help from the charity. This is just what happened with the PFI initiative which merely created a vast expansion in middle management of the NHS and raised their wages at the expense of improving services, cutting staff wages, increasing waiting times, less services and cutting back on helping people who needed to access those services.

The last thing we need is a society where the poor rely on charities for assistance - that would be a disgusting return to the era of workhouses, poor laws and the means test.

What we need is NATIONALISATION, in that we need to re-empower the Nationalist State as a mechanism for the advancement of our society and to benefit our people.

Under Thatcherism the defining feature of her politics was the destruction of state power, for as she privatised the public services and signed us deeper into Europe, at every level the power of the British State to act as a force of social change in British society was cut back, minimised and removed.

Blairism was merely an extension of Neo-Conservatism which is EXACTLY what Phillip Blond is.

His ideas that the emasculated remnants of the powers of the British state should be used to empower church groups, voluntary associations and charities is The Bush Doctrine - in that this is merely Neo-Conservatism.

The circle returns full circle and we see that there is no difference between Blairism and Cameronism - both are merely variants of Thatcherism.

Cameronism will create the same situation in the UK - and that is his plan, to have the UK as zionist and dominated by the Christian zionists as in America.

The British state is an emasculated poison dwarf, the surveillance state - what actions the state does undertake are done in the name of international finance, obeying EU dictates, removing civil liberties and abusing technology to wittle away liberty via CCTV and e mail and phone taps.

The state virtually does not function anymore as a mechanism to promote the interests of the British nation and British people.

In the absence of the British state, the power of corporations and supra-national institutions have risen to replace state power, and just like the old centralised state they have ridden roughshod over individual liberty, society and communities.

We are dominated by Europe, the US and can do nothing to prevent the actions of international corporations who can close down British factories at a whim.

The idea that the British state has power anymore is a lie.

The British state is no longer barely functional other than as a vampire feeding upon the wealth of the people.

It takes our money and pumps politically correct poison back into society.

The idea that the NHS is something we should be proud of as part of the British state is rubbish - Most hospitals are not part of the NHS, they are independent organisations run by useless middle managers with bloated wages.

That is what cutting back the power of the state has done, it has allowed unelected, middle manager crooks to grow rich whilst exploiting the institutions they are meant to serve.

What we need is for the British State to reclaim back its powers in most sectors.

Cameron and his Red Tory chum want to perpetuate the 'withering away of the state' and like the Marxists and Trotskyites they share the same goals - a nation without borders, a state that no longer exists and a population with no loyalty to anything but themselves and consumerism and globalism.

One can see a situation where Cameron creates and facilitates a Balkanised Britain, where 'empowered communities' of colonists run their own courts, their own police and their own economic systems.

What then of Britain ?

The ideas of the Red Tory are total bollocks.

Will Cameron act to remove wealth and power from his hedge fund backers, his aristocrat donors, his zionist lackeys and the super rich 1 % who own 70 % of Britains wealth ? Of course he wont.

He is handcuffed by the fact he and his party are whores to the people who fund them.

The ideas of Red Tory will not force Cameron to dump multi-culturalism, scrap political correctness and impose British culture on our country, for Cameron and the Tories are slaves to these ideologies.

Will Cameron scrap positive discrmination, affirmative action and plans to promote people on their basis of who they insert their dick into, what their skin tone is, whether they are a woman who has sex with other women or whether they worship a god from a non-British religion ?

Of course he wont.

He is as much a whore and slave to the creedo of political correctness as all the others.

Red Tory is shouting into a vacuum.

The solution is a return to re-empowering the British National State.

The British National State can then dismantle the Servile State, eradicate political correctness, remove us from the EU, reimpose national borders, recall the army to Britain and build a National banking system, deal with the excessive riches of the super rich through taxation and start to build a better British society and communities through Localised Capitalism.

We will not return to the era of the workhouses, to the era where people had to beg for charity as the state refused to take care of its own people, to a world of poor laws and the means test.

This is the vision the Tories have for Britain, a vision of the super rich in their vast land and properties whilst the poor go cap in hand to beg from charities.


Better a revolution than that.

Known as the “Red Tory,” Phillip Blond will be watched by the Conservative leader as he unveils his radical theories for healing troubled neighbourhoods at the launch of his new think tank, ResPublica.

The former theology lecturer’s views have created a stir in Tory circles, due to his rejection of Thatcherism and the primacy of the market.

Instead, Mr Blond believes, power should be given to community groups, volunteers and church leaders to solve social problems.

His “progressive Conservative message” is known to chime with Mr Cameron’s values, although some within the party are said to be less enthusiastic about the former socialist’s message that the market does not know best.

Steve Hilton, Mr Cameron’s policy adviser who is responsible for much of the party’s recent “blue skies thinking,” and Oliver Letwin, in charge of drawing up the election manifesto, are both fans.

Mr Letwin has said: “Blond's work is seminal. He's one of the most exciting thinkers around.”

At the launch, Mr Blond will outline his view that ordinary working people have been “crowded out” from the opportunity to increase their wealth and access entrepreneurship under Labour.

But, he will add, ending the “monopoly dominance” of big private sector firms in areas such as banking and supermarkets must also be carried out in order to help the less well off.

The “Red Tory” will call for church and community groups to offer services along the model offered by the John Lewis partnership, where employees have a stake in the business.

In an interview this week, he said: "It's about capitalising on our two biggest assets – the insight and dedication of front-line staff and the engagement and involvement of citizens and communities.

"The state has bailed out the banking system but has proved incapable of saving its own citizens from debt and servitude.

"Moreover the state has arrested social mobility and destroyed the structures of working class advancement.”

Mr Blond was also scathing about Labour’s destruction of the “respectable working class,” accusing the party of fostering a form of multiculturalism which divided rather than integrated society.

He said: "And in the absence of a common British narrative that unites all peoples and classes; proper respect for other cultures and traditions has collapsed into a state sanctioned multiculturalism that has produced antagonistic communities and licensed the return of extremism and racism."

The Conservative leadership is, however, keen to make clear that Mr Cameron does not sign up for the entire “Red Tory” project.

A spokesman for Mr Cameron said: "The fact that David Cameron is appearing at this event doesn't mean that he endorses all of Phillip Blond's views."