The UAF and Searchlight silence over UKIP 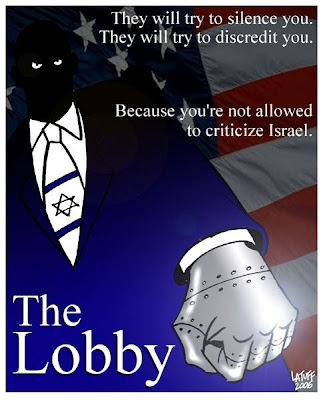 
The silence from the UAF and Searchlight over the election of Lord Pearson, a spawn of Thatcher, is deafening.

Whilst the UAF attack the BNP for our so called 'racism' over our critique of Islam (a religion, not a race, by the way) they have been totally silent about the statements of Lord Pearson, his links with Geert Wilders and his intention to campaign on the issues of immigration and Islam.

Searchlight is not an 'anti-racist' group, it is a Zionist front group - something which UAF has itself confirmed many times.

Therefore the silence of Searchlight reveals much about UKIP and Searchlight.

I have stated that the role of Lord Pearson is to turn UKIp into the Thatcherite wing of the Tory Party and therefore create in British politics a US dominated political poodle to replace the EU friendly Conservative Party.

UKIP is a Zionist and US sponsored pseudo-political party, which has been created to put pressure on the Tories to remain as part of the America / NATO/ Israel alliance.

This is why Searchlight have not, and will not , attack UKIP for their 'racist' immigration policy, their 'racist' policies towards Islam and their links to 'racists' like Geert Wilders.

This silence is the greatest proof.

It proves not only that UKIP is a Zionist front group, it proves that the attacks by Searchlight on the BNP are simply Zionist attacks on the BNP as the BNP is the only British Nationalist party that puts Britain and the British people first.

The failure to attack UKIP will reveal the real nature of Searchlight to everyone, and will allow us to attack both UKIP and Searchlight.

As for the UAF, they have also not attacked UKIP.

The question is why ?

The reason for the UAF not attacking UKIP is not because they are pro-Zionist as they are not, seeing as they a front group of the Socialist Workers Party who are avowedly anti-Zionist, their failure to press the attack on UKIP is due to incompetence.

Therefore it has Weyman Bennett as leader, a man so stupid and inept, that he doesnt know his arsehole from his elbow.

Therefore we can expect at some time Weyman Bennett to be pressurised by a few token honkies in his steering committee to get his act together and begin to campaign against UKIP - though if he doesnt that will be good for us as well, as we can then reveal that he and the UAF are total hypocrites.

All in all the last few months have been a disaster for the UAF, Searchlight and UKIP.

The EHRC case against the BNP means we will now be recruiting ethnic minority people into the party and therefore the old attack on us 'The BNP are a racist party' can be defused with a simple rebuttal of 'No, we are not as we have an open membership policy and have ethnic minority members'.

Bang goes the most powerful weapon the left and media use against us.

Then we have the fact that Lord Pearson will seek to drive UKIP onto the rocks of racism by campaigning against Islam and mass immigration.

Now if the left and media do not attack him on this then this reveals a double standard we can easily exploit.

But the main issue for UKIP is this - how the hell are its blazers and blue rinse brigade going to cope with the screams of racism that will be cast at them when they begin to campaign on the issues of Islam and mass immigration.

They wont be able to cope is the answer.

The average UKIP member has the spine of a slug - and thats why they are in UKIP.

They will not be able to cope with any level of media abuse or abuse from the far left on the UAF on the issue of them being racists.

I suspect that once the self righteous howls of racism from the liberals, the media and the left start to get thrown at UKIP many of its members will leave.

It appears that the party has shed thousands of members over the last year anyway and did not receive any boost from the european elections re membership.

As for Farage winning a seat as an MP, well anyone who believes that is simply bonkers.

He will come second or third, but he will not win.

As for the smoke screen argument that Farage resigned to concentrate on being an MP - come off it guys.

Tony Blair was an MP, leader of the Labour Party and Prime Minister and a war criminal.

Farage is either an idiot, or there was another reason for his resigning as party leader, and we all know the real reason was to allow UKIP to become the Thatcherite wing of the Tory Party under Lord Pearson.

The plan failed though, as none of the big wigs, tory toffs and other remnants of the Thatcherite vermin in the Tory Party will defect to UKIP.

For proof of the Thatcherite uprising in the Tory Party, take a look at the article here by the Thatcherite Damian Thompson and the comments on the article from Thatcherite Tories saying they are going to vote for UKIP - the job of UKIP is working already which is to terrify the pro-EU Cameron fops into remaining as lickspittles of America.


The Tories will be frightened as many Thatcherite Tory voters will now vote UKIP, which is the Pearson Plan - to turn UKIP into an electoral instrument against the pro-EU Cameronites and to try and force the party back into the pockets of America.

As for the idea that UKIP will challenge the BNP for votes in working class areas - that is a suggestion only an middle class idiot Thatcherite like Damian Thompson would make.

We remember what the bitch did to our country.

The idea that the British public want a return to Thatcherism - which involved privatising the NHS, encouraging mass immigration, opening up Britains borders, inviting in the Islamist loonies of the world into Londonistan so as to secure cheap Arab oil, ending the supply of council houses and dumping our people into homelessness, closing down British national industries, stripping down the British armed forces, making us the servants of America (and Europe) , more free market globalism and deregulation of the banking system, more globalisation and the internationalisation of the British economy, more British jobs being outsourced and economic domination by a bankrupt America controlled by the shysters and scumbags of Goldman Sachs is the sort of thinking that only demented Tory Toffs on country estates would have.

UKIP have shot themselves in the foot big time.

We will kill UKIP simply by calling them 'Thatchers Bastards' and Lord Pearson as a Thatcherite Tory Toff.

The problem is that UKIP are too retarded to know they are screwed.

Wait till the left start howling at them 'racists' - then we will see the real nature of UKIP.

UKIP will start to contract and die like a salted slug.

Posted by Defender of Liberty at 02:24

Thanks for the support mate, but we have to stay unified and so divisive comments cant be put up,

Interesting point. Thanks for another good read.

Any danger of this appearing on the BNP website? or is the editor too busy for such things? or too limp?
Where has Nicks climate change speech gone?
If the current editor isn't up to the mark let's have someone in there that is.
You would be my choice, Lee, and I suspect the choice of many others.