Oil and The Great Collapse 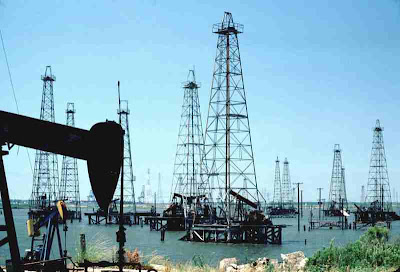 In recent years a challenge to classic Darwinian theory has come via the idea of Punctuated Equilibrium.

Punctuated equilibrium is a theory in evolutionary biology which proposes that most sexually reproducing species will experience little evolutionary change for most of their geological history (in an extended state called stasis). When evolution occurs, it is localized in rare, rapid events of branching speciation (called cladogenesis).

Cladogenesis is simply the process by which species split into two distinct species, rather than one species gradually transforming into another. Thus, "punctuated equilibria is a model for discontinuous tempos of change (in) the process of speciation and the deployment of species in geological time."

Punctuated equilibrium is commonly contrasted against the theory of phyletic gradualism, which states that evolution generally occurs uniformly and by the steady and gradual transformation of whole lineages (anagenesis). In this view, evolution is seen as generally smooth and continuous.

This theory demolishes the idea of gradual evolution and instead proposes a theory based on sudden evolutionary spurts, when a species suddenly undergoes change into a new species and is then replaced by this whole new species.

Incremental change leads to qualitative change, in a moment of accelerated Punctuated Equilibrium.

The same thing occurs in politics.

Continuing on from De Benoist and his Convergence of Catastrophies theory we see that a system, such as a political system, undergoes a negative feedback loop.

A negative feedback loop is a feedback that reduces the output of a system.

In other words a society is no longer undergoing progressive social evolution. More and more energy and money is being spent on sustaining the present social level than could be gained from social expansion.

In other words, the system is now so dysfunctional that even if the system expanded to achieve its most efficient expansion capacity, that this rate of expansion would still not match the rate of internal social collapse.

Eg the economy could at its very best only expand by 4 % per annum but the social costs of sustaining the present levels of social complexity are deficit debts of around 5 % per annum.

In other words, all new growth goes on cutting old debts.

The ONLY way that societies save themselves from negative feedback loops is by injections of new energy.

Human progress is not measured by the GDP but by GEP - the Gross Energy Product of a nation.

Any nation that produces more energy by itself than it requires for its own internal needs, is an nation in an ‘ Energy Credit’ situation - and therefore it is a nation that is capable of social and economic progress.

Any nation that produces less than it needs in energy terms is in Energy Deficit and is incapable of social and economic progress.

For example, because of North Sea oil depletion in 2007 the UK is now a net importer of energy.

As a result of that situation the British Army were sent to Iraq to secure Iraqi oil for the US and into Afghanistan to secure the oil and gas pipelines that feed the West its gas and oil.

Not only did this open up the Empire, as now Royal Navy ships could be used to protect shipping, it gave birth to the geo-politics of Oil Imperialism. Tanks, planes and lorries could be used to assert British control over conquered territory.

Because the Royal Navy now required oil, the national security interests of Britain were now projected onto a global stage so as to secure that oil. The oil company Anglo-Persian was taken into part ownership by the British government and a 20 year contract guaranteed the oil for the expansion of the Royal Navy.

In 1918, a few days after the armistice was signed, at a Inter-Allied Petroleum Conference dinner Lord Curzon stated that, “The allied cause had floated to victory upon a wave of oil “.

World War 2 was also an energy war, as Hitlers aim for expanding into the East and into Russia was to secure access to oil supplies in the Baku oil fields of central Asia and further on and into Iraq. Blitzkreig was run on oil. Hitler realised that reliance on coal for transportation was what had lost Germany the First World War.

Japan also invaded the Dutch East Indies to secure their oil supplies and attacked Pearl Harbour in order to disable the US fleet and prevent it taking the oil wells back.

The outcome of World War 2 was decided before the first shot was fired, for the allies controlled 86 % of the worlds oil supply at that time.

The Iraq War and Afghanistan War are simply products of the same, inexorable logic of energy dependency.

The world though is about to enter the era of Peak Oil.

This will cause a massive reduction in social complexity and social progress.

The present political paradigms are inherently unable to deal with the reality of the coming storm.

They are ideological products of the 19th century and are obsolete as regards solutions to the problems of the 21st century.

The present political system is now stuck in a negative feedback loop that it cannot escape.

This means at some point the entire system will crash.

The transition from the dollar being the global banking reserve currency and the creation of a new oil bourse and petro-dollar recycling system based on the Euro as opposed to the dollar, means the US Imperium will collapse.

Both are under attack.

Unfortunately for the US and Britain the costs of securing the Iraqi oil, and its associated infrastructure eg Afghanistan, is such that it is draining social complexity and reducing social progress.

Therefore the system will collapse.

Only one ideology will save this nation from The Great Collapse that is coming to the world, a collapse resulting in famines, wars, eco-conflicts, resource wars and mass terrorism.

Therefore the challenge is to prepare for the collapse.

When the collapse begins it will be sudden.

Our challenge is to prepare for power, long before the lights go out.

I believe this to be true, I also believe there is no need for a collapse, we could begin reversing this today and have national prosperity within one year.

Though that would need strong leadership and policing because there are those that want the collapse to occur.

What they are attempting to do is to Crash land Western civilisation using every available means to bring about our demise, everything from civil unrest, ( if it doesn't occur spontaneously it will be provoked ) pandemics, global financial crises, all deliberately engineered so that as society crumbles, wealth and, more importantly Control is syphoned upwards into the hands of a few elites who most people have never even heard of.
I further believe that they are arranging events so that literally hundreds of millions if not Billions will die as a result of this engineered chaos.

Those engineering this global Armageddon are hoping that from the ashes of the old they, and they alone will remain in control of what remains of the world and it's civilisations.
A few thousand Oliogarcs, controlling with absolute power the lives of a few hundred million slaves, unfortunate enough to have survived.

If you ask most people who is the richest person in the world, they might say, Bill Gates, or Warren Buffet.

These guys own peanuts compared to the secret rulers of the world.

This is all wrong, we as a nation do not coin our own money as most believe, we borrow it.
Can you believe this, we actually borrow worthless bits of paper AT FULL FACE VALUE PLUS INTEREST. to pay for public services.

If we as a nation had coined EXACTLY the same amount of money as we had borrowed from the PRIVATE Bank of England, over the past 50 to 100 yrs, our National debt would be ZERO.

I was stunned when I first realised this a few yrs ago, it proves ABSOLUTELY beyond doubt that Parliament is a Charade, because anyone acting in Britain's interest would speak out about this fraud.

There are of course MP's who have no idea how this scam works, but those at the top, Cameron, Brown, Clegg, they know.

And they have been waging war against Western Cicilisation for decades.

I believe, with Common sense restored in this once great land and a sensible population we could be insulated from oil shortages.
I regularly used to fill up my deisel with Veg oil bought straight from Tesco's.
I was most annoyed when Clarkson did a programme on this claiming it a success and prices then went from 50p per litre to well over a pound where they still remain today.
Such is the power of the Petrochemical Industry that I have no doubt they orchestrated this rise, can't have lowly Farmers muscling in on their turf, they and Govt want us Fleeced & Taxed at the forecourt pump.

What a Great gift to our farmers would this be, A sensible population level would mean they could grow food and significant amounts of the Nations fuel, I believe at least 50%, Not everything could be run using oil, though I'm hard pressed to know why.
A further advantage is that the Carbon released from burning Veg oil is only that which was absorbed from the atmosphere during the plants growing season, in other words there is no net CO2 gain to the atmosphere.
EnvorFascists try to confuse this self evident truth with smoke and mirrors but Carbon in Immutable, plants do not create Carbon, they merely use it, fixing it from the atmosphere into the Oil they Produce.....
The Petrochems and Big Govt hate this of course....

Bearing in mind we do have some reserves left to act as a buffer during the transition but I believe we could be self sufficient in oil within 5 yrs.

Sure, we couldn't do it now, we have too mant people here, that's why I said, with a sensible population balance.

I also believe that spare electrical capacity could be stored as Liquid Hydrogen, split from water, and stored.

This is old technology, the challenge would be storing vast quantities of Liquid hydrogen, which we already do on a small scale as medical and scientific gases.
The next challenge is, could this hydrogen be burnt in a power station to produce some of the nations power, again this is entirely feasible, we are only asking can you set for to hydrogen and use it to boil water, to which the answer is an obvious yes.
Maybe we dont even need this, after all if our Biofuel production were to be slightly greater than our usage we could store the excess, withing 5 yrs there is no reason why we as a nation could not have 6 months to a years supply of fuel.
Within ten yrs we could have two yrs worth of fuel to be used and cycled in the event of a crop failure.

Contrary to what Govt and the Petrochemical lobby would have us believe, Biofuels are Carbon Nuetral.

This deliberately engineered crash need not happen, we can be self sufficient.

Thank you Lee, that was enlightening to say the least, transfored into common sense; as usual.