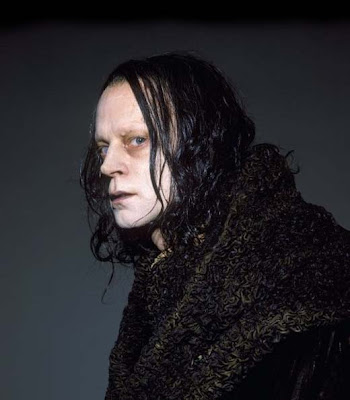 Image - John Bercow, the Grima wormtongue of Parliament, a poison dwarf whose words seek to corrupte the democratic political process.


The speaker of the house of commons, John Bercow MP is a Jew.

We know this as Bercow made an issue of his Jewish ethnicity in a speech to the Youth Parliament of Britain a few weeks ago when he had a pop at the BNP.

So Bercow proposes a plan that will allow people like him, who are Jews, to get into Parliament above white non-Jewish people.

Not because of their talents, skills as a politicians or because of work in their communities, wisdom or fitness for office - but simply because they are Jews, or black or asian or Muslim etc etc.

Just as long as they are not British and White.

Once upon a time this was called CORRUPTION, when someone changed the rules to enable their friends and supporters to benefit whilst disadvantaging others.

This plan of Bercow is nothing more than a plan to stuff Parliament with his own people, whilst denying the indigenous British people the same rights to access the political process.

After Hubris comes Nemesis - and Bercow should remember that.


Female? Black? Gay? All three? Then you're more likely to become an MP under controversial new plans

Speaker of The House of Commons John Bercow

Under proposals backed by Commons Speaker John Bercow, but labelled as 'insulting' by former Tory minister Ann Widdecombe, parties will be made to declare publicly how many women, ethnic minority, gay and disabled applicants they reject as potential Parliamentary candidates.

Parties also face demands to ensure at least half the MPs leaving Parliament at the next election - in what is expected to be the biggest exodus since 1945 - are replaced by women.

The proposals have emerged from a crossparty review set up by former Commons Speaker Michael Martin - and taken forward by his successor, Mr Bercow - on how to make the chamber more representative.

In an interim report published yesterday, the panel said parties must be made to be more transparent about the people putting themselves forward as would-be MPs.

The report said: 'The fact remains that, at present, the House of Commons continues to be largely white, male, middle-aged and middle-class: people from under-represented groups who are putting themselves forward for selection are still proportionately less likely to be selected.'

The report goes on to call for half of the MPs leaving Parliament at next year's election to be replaced by women and to support a big increase in black, Asian, disabled and gay MPs.

But the proposals were condemned by Miss Widdecombe. She said: 'The concept of merit is going out of the window.

'I don't care whether an MP is male or female, black or white, rich or poor, old or young. It doesn't matter.

'It's frankly insulting because it suggests women and ethnic minorities cannot get there on their own merit.'

You should have been a carpenter, 'cause you nailed it so perfectly.

"The speaker of the house of commons, John Bercow MP is a Jew."