Time For The Church To Apologise 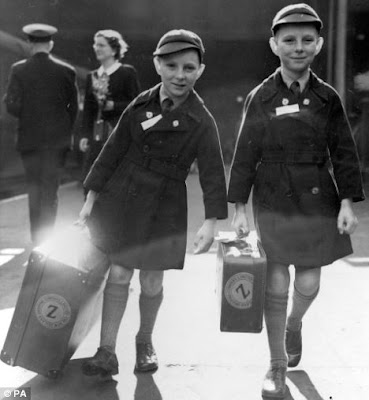 
When are the Churches going to apologise for shipping young white children from the UK into Australia and then leaving them at the mercy of paedophiles priests in the Church and church run orphanages.

Gordon Brown will apologise for the UK's role in sending thousands of its children to former colonies in the 20th century.

The Child Migrants Programme - which ended 40 years ago - sent poor children to a 'better life' in Australia and elsewhere, but many were abused and ended up in institutions or as labourers on farms.

The chairman of the health select committee which looked into what happened said the Prime Minister wrote to him this weekend to confirm he would issue an apology in the new year.


Kevin Barron said he was 'very pleased' to have received the written commitment from Mr Brown.

'After consultation with organisations directly involved with child migrants we are going to make an apology early in the new year,' he said.

The Prime Minister told him 'the time is now right' for the UK government to apologise for the actions of previous governments.


'It is important that we take the time to listen to the voices of the survivors and victims of these misguided policies,' Mr Brown wrote.

Sandra Anker, who was sent out to Australia from Britain when she was six, described what happened as 'one of the crimes of the century'.

She told the BBC: 'Why I was sent out is beyond me. I don't understand it. I was deprived of my rights as a British citizen and I feel the British government have a lot to answer for.

'I feel really angry about it and feel the British government should compensate us so that we can get back to England and get to be with our families.

'We've suffered all our lives. For the government of England to say sorry to us, it makes it right - even if it's late, it's better than not at all.'

A Government spokeswoman said: 'We have been in discussions with the Australian government and are working closely with the Child Migrants Trust and the International Association of Former Child Migrants and their families.

'We will undertake a period of dialogue with those affected, prior to a formal apology. We plan to make a more detailed announcement early in the new year.'
Kevin Rudd

Kevin Rudd will formally apologise to the 7,000 child migrants from Britain who live still in Australia tomorrow

The development comes as Australian prime minister Kevin Rudd prepares to deliver a national apology to the 'Forgotten Australians' tomorrow.

Mr Rudd will recognise the mistreatment and continued suffering of some 500,000 people held in orphanages or children's homes between 1930 and 1970.

He will combine it with an apology to the 7,000 child migrants from Britain who live still in Australia.

As they were shipped out of Britain, the children were separated from their families and many were told - wrongly - they were orphans, while the parents were told that they had gone to a better life.

But most were brought up in institutions, or by farmers, and many were treated as child slave labour.

The Australian government will formally apologise at a special remembrance event in Canberra, where Mr Rudd will say sorry on behalf of the nation to those who suffered cruelty and hardship including physical, psychological and sexual abuse.

Posted by Defender of Liberty at 07:38

Note one of the side headers in the BBC report today.

It is the Catholic Church in Australia that has to apologise.

It's always the Catholic Church at the centre of atrocities like this (unless it's Muslims, Marxists or some other church-state outfit e.g. Nazism, riddled with pederasts in WW2, all of which are offshoots of Catholicism anyway).

But being run by Catholics, Thompson and Byford, the BBC avoided mention of the Catholic Church in today's lead article.

The full horror of how British child migrants suffered at the hands of paedophile priests in Australia emerged last week. Children transported in the 1960s endured years of depravity at the hands of the Christian Brothers who abused them in the name of God. In a harrowing report into the scandal of child migration, the Commons Health Committee highlighted the alleged abuse suffered by boys and girls sent to Catholic institutions in the 20 years [after] 1947. Referring to one specific home, the report said: “Some of what was done there was of a quite exceptional depravity, so that terms like sexual depravity are too weak to convey it.” The plight of up to 10,000 youngsters who were sent from children’s homes to Australia and New Zealand has received “shamefully little attention,” (guess why? - Dr. Lloyd) the MPs said. The report found that most former child migrants seemed to have been subjected to considerable hardship and singled out Catholic homes run by the Christian Brothers and the Sisters of Mercy in Australia as particularly brutal. The Christian Brothers have publicly apologized for the abuse that took place in their homes, (they certainly cannot deny it - Dr. Lloyd) but the MPs said that there was ‘more to learn’ about what went on. The Brothers were also criticised for using ‘every legal avenue’ to block court action by abuse victims (YOU BET THEY DID! - Dr. Lloyd).

Lee there are countless connections all leading in the same direction, all provable fact.

WHEN WILL THE BNP MAKE THIS SHADOW GOVERMENT KNOWN TO THE PUBLIC?

All the apologies are ridiculous. Different times, different morals, different values. The orphans at least were sent to new homes in the white dominions, and I am sure some were abused by priests but most survived and prospered. The irony of course is nowadays such unwanted children would be aborted with abortion on demand upto 28 weeks in this country!

What they did was evil, then, and anytime.

so while the goverment was importing immigrants they were deporting British kids!

Why is it that the Catholic Church routinely condemns those who are pro-choice or docs who perform early abortions but will protect those in their midst who abuse children after they are born? As evidenced in this post and other articles I've read, the church does not seem to protect children abused by those within the church. I'm not sure if it's only the Catholic church. If I'm not mistaken, Native American children suffered a similar fate in Protestant run group homes years ago. I'll have to look it up to be sure.

The Canadian Holocaust refers to systematic abuse and even genocide of native children in Canada in the 20th century.

It could also have happened in the US with vulnerable victims.