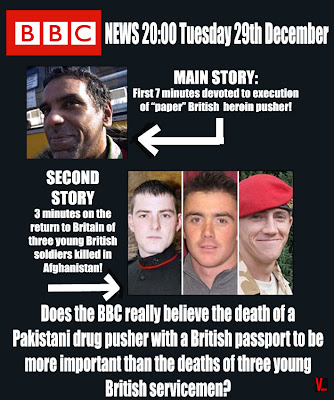 Posted by Defender of Liberty at 12:49

Gary McKinnon languishes in prison awaiting extradition to America to face possible life in prison and scum Brown does nothing to prevent it. And yet Brown and Cameron cry their poison tears over a heroin dealing piece of shit. Brown and Cameron are vile degenerate cunts, I wouldn't piss on them if they were on fire.

something to ask " Andy "Burnham, Ivan Lewis and indeed Gordon on the hustings in a few weeks time.
"You described yourself as deeply saddened and devaststed by the news of the Chinese execution of a convicted drugs , did you also feel deeply saddned on the same day seeing three more British troops coming home in boxes from Afghanistan or do worthless shits like yourself only feel for convicted drug dealers?"

So the incredibly ugly Ivan "Lewis" MP was sick to the stomach today by the drug smuggler's execution . He is also a leading supporter of the war in Afghanistan and very much a labour friend of Israel. Ah that explains it.

I watched an episode of Not the nine o'clock news on BBC 2 on Sunday in which i saw a sketch of Pamela Stephenson 'blacked up' as a black women.
Earlier this year all hell broke out when a Aussie band preformed 'blacked out'.
How is it the BBC can be racist but no one else?
I have complained to the BBC about it asking them if 'blacking up' is okay with them.