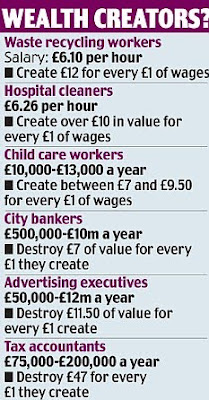 The Thatcherite idea of economics, the Trickledown Theory is bollocks, and now this report proves it.

The bankers have never created wealth, they merely live off it.

The rich do not create wealth, they merely consume it.


How bankers destroy £7 for every £1 they create: Hospital cleaners are more valuable to society, say researchers

Bankers may be good at making money for themselves - and sometimes for their banks - but they are a drain on society, a study has found.

It says they effectively take £7 from the rest of us for every £1 they create.

Lowly-paid employees such as hospital cleaners and waste recycling workers are far more valuable according to the New Economics Foundation thinktank.
Hospital cleaners

Undervalued: Hospital cleaners are more valuable to us than bankers, a new study claims

It rated different jobs on how much they help or hinder society through the social, economic and environmental effects of the work.

The researchers said the traditional view of bankers creating wealth which trickles down to others is no longer correct.

Instead, the actions of high-earning investment bankers have had 'damaging social effects'.


They helped bring the global financial system to the brink of collapse - causing jobs to be lost rather than created and increasing the public debt.

One of the top-paid bankers is Barclays president Bob Diamond, 58, who received more than £20million a year at the height of the banking boom.
Bob Diamond

Wealthy: Bob Diamond earned more than £20million a year at one point

The report says advertising executives and tax accountants destroy even more of society's wealth as they create their own.

Childcare workers, by contrast, free up potential wealth by helping parents keep working - generating up to £9.50 for every pound they are paid.

This helps society now and in the future - so they generate £12 for every pound.

The foundation said there needs to be a 'fundamental rethink' of how people are paid.

'Although this will not always hold, it points to a massive flaw in the system and highlights the need for reform.'

Using investment bankers as an example, it said: 'Far from being "wealth creators", City bankers are being handsomely rewarded for socially -damaging activity.

'They are not just overpaid; they are overpaid at the expense of others.'


In contrast, hospital cleaners are paid just £6.26 an hour but help society by making sure infections do not spread - which would mean people cannot work, or are not as profitable.

The report said: 'Not only do they clean hospitals and help maintain standards of hygiene to protect against infection but they also contribute towards wider health outcomes.

'The importance of these cleaners is often underestimated and undervalued in the way they are paid and treated.

'We estimated that for every £1 they are paid, over £10 in social value is generated.'

The report called for a high pay commission to recommend a maximum national pay differential and the introduction of a transaction tax to reduce high risk and unsustainable trading.

It said high pay should be 'reined in'.

'As a society, we need a structure which rewards those jobs that create the most societal benefit, rather than those that generate profits at the expense of society and the environment.'