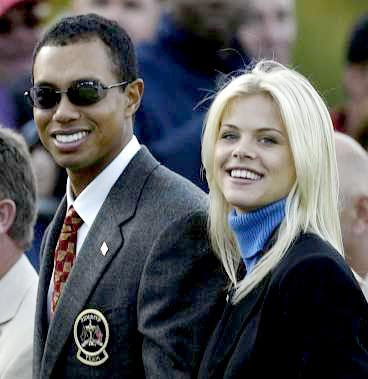 Image - The perfect multi-racial, multi-cultural media couple. And it was all bullshit. Behind his wifes back he was sleeping with as many skanky white whores (not black whores though, did you notice that. Tiger likes his sex slaves white just as the old white slave masters loved their black female sex slaves on the cotton plantations) as he could, the degenerate whore mongering, probably AID's infected twat.


Why are people so dumb that they believe the PUBLIC image of someone like Tiger Wood's is the real person.

Oh how the media and liberals loved Tiger, with his multi-cultural heritage, his beautiful blonde trophy wife and his money, he was the perfect Black pin up for the media bollocks about multi-culturalism.

And it was all bollocks.

He is just another degenerate whore mongering adulterous scum bag, who had sex with so many disgusting low rent white whores his poor wife must now be terrified about having an AID's test.

Tiger Woods was another media product who was paid tens of millions a year to peddle shit to the masses, just because he was black.

They use them like the old slave masters used to use slaves.

Need to sell some shit car to the masses, then hire a black for the adverts.

Want to sell a shit rap album made by some talentless white boy, then hire a black DJ and a few black dancers for the video.

Want to look 'edgy' and 'cool' then have a few black friends from da hood.

Blacks are the latest designer product for white people.

Want to make a TV advert about some shit product to sell to dumb white people - then hire a Black male and a blonde woman and hey man your product is cool.

Those dumb fucking idiot whites that think talking, dressing and acting like a stereotypical media image of what a 'Media Manufactured Black Person' is are pathetic media slaves, brain dead morons who have no personality or intelligence - they are the media conformists, little slaves.

They dont see black people as fellow human beings, they fetishise them and dehumanise them and regard them as simply human commodities that are fashionable and 'cool' at the moment.

Next year probably being Oriental will be cool - anything, except white.

And its all bollocks.

All these 'black heroes' peddled by the white corporate media are just a bunch of jokes.

Lewis Hamilton - a tax dodging greedy little prick who fled Britain so as to make tens of millions of pounds by avoiding pay tax in the UK and thereby supporting the poorest people in British society.

That little prick should NEVER be allowed to be nominated as the British sportsman of the year again as he doesnt pay tax in Britain.

He is just another grubby and greedy little jumped up shit who doesnt give a toss about the British people.

Muhammed Ali - Black Nazi and member of the Nation of Islam

How many black sportsmen and women have been exposed as drugs cheat.

Year after year we find out more and more about the real people behind the white corporate media peddled bullshit.

Most of these 'media products' are simply 'Millie Vanillis' = media manufactured drones to sell to dumb white consumers who are about as real as a CGI special effect in a Hollywood movie.

They are simply normal people - no-one is cool.

They all have to take a crap like the rest of us, stink of BO if they dont wash, have bad breath if they dont brush their teeth and leave skid marks in their underwear if they dont wipe their arses properly.

Black people arent cool just because they are black.

No-one is cool just because of their skin colour.

Blacks in the media are used as commodities in order to make shit products look cool, as unlike whites, blacks have not been abused and dehumanised for decades by white liberal filth about racism.

You see racism is the ultimate crime.

You can be a black child rapist like Michael Jackson and the media will love you, or a black rapist like Mike Tyson, but the moment you are a racist then thats it - your 'crime' is unforgivable.

In fact you can be a killer, a rapist, a paedophile, a gangster, a drug dealer and as long as you are black then its cool man, as you are edgy and 'contemporary'

And the masses, swallow this shit like the brainless lemmings they are.

Great post Lee, i see you are "keeping it real"!

Good stuff, Lee. I'd been thinking some of this and am glad you've now said it.
Ha ha, TW is another one who clearly doesn't think black is beautiful.

These are your own words, taken from 'Shoot Criminals'

These are your words and yet in this post, you clearly ignore your own logic so that your 'argument' works better.

You cannot declare that each of the people you mentioned are guilty of their accusations.

Lee Barnes, a man who must attach race into everything. Whitey cheats on his wife too y'know.

Do I tell the media what terms to define 'blacks' such as Tiger Woods by ? No.

My article used the language of the media - 'Blacks' which is used by the media to define those people as 'blacks'.

What I think they are, or call them, is irrelevant as the media has already defined them as 'blacks' and they are regarded as 'blacks' the same as the half white Obama is called 'Black' by the media when he could just as easily be defined as 'white' if the terminology was defined other than skin colour.

Tiger Woods is 'black' regardless of his white, hawaiian and oriental racial heritage.

What I would define them as means nothing to the planet, so in order to explain the logic in the article I have to use the same logic and language as the media.

I look forward to your article on Andy Cole, Lee, our own 'Tiger Woods.'

I don't guess he's about to give up his serial infidelity either.

As Disraeli said 'Race is everything' and as a British Prime Minister and a Jew, he would have known.

Tiger Woods is a massive media celebrity as he is a talented 'black' in a time when the white liberal media use talented 'blacks' as a political weapon, an advertising tool and a social mechanism in order to coerce whites and promote the multi-cultural society.

If he was a white golfer he would be being abused, vilified, despised and his career ruined forever - but hey man, hes black and therefore he can be forgiven anything.

And besides the sex slaves he used for his sick and vile lust were only white sluts so who gives a fuck anyway eh.

White whores are worth less than black whores.

However Andy Cole is another black football creep, who beat up his wife Shirley some years back.

Every black rapper has to have a few submissive, bikini clad, semi-naked white sluts offering themselves to him in his MTV video - white women are just white slaves to be used as meat for black males in the degenerate world of the media.

White women even offered for sale in the streets of Britain by sex slavers and white little girls used as sex slaves by Muslim rape gangs.

LMFAO,Hee, hee ; Go on Lee get it off your chest mate, we fkn loves it :o)

I hope that Elin takes Tiger to the cleaners. He deserves it and I don't care what color his whores are.

I disagree that Tiger was the one doing the using. I can't speak for England but in America, whites still have the upper hand in these cases. None of those women would have given Tiger a second look had he not been a famous athlete. Now these no name women will get modeling deals, reality shows, etc while Tiger (the Cablasian) loses everything. (Again, he deserves it.) So technically, he was the slave.

I may get shot down for what I will say next but oh well, LOL: I agree with the poster who stated that even white men cheat. All one has to do is look at the American media in order to see cheating white men...the worst being Gov Sanford who is the most annoying of them all. I'm not saying this to make black or cablasian men look any better. My point is that we live in a culture that teaches all men that they can run through and walk all over women (whatever the race). I hope that an example is made out of Tiger.

I overheard a few comments from Talk Sport radio , a white presenter and white interviewed talking about Tiger woods , i.e heaping praise and then suddenly one said something like and to top it...hes well endowed...

.. now if that was a white talking about a white golfer it would be unacceptable..i.e would be called gay...but when its in praise of the balck man and so the
multiculti talented''elites''its cool ...(so penis envy for the great black master b y the white media whore/slave male )

You take no prisoners.

intersting that the media have a gagging order imposed on to prevent further stories being spread around..you know stopping free speech and all that. but where the fuck was the gagging order to prevent the main stream media from publishing the men and women's private information.