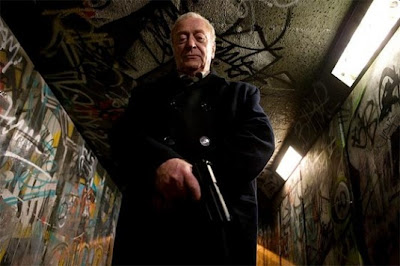 Harry Brown is the best film that Michael Caine has made in his entire career.

He should be nominated for an oscar for his performance.

Harry Brown is one of the most gruelling, shocking and frightening films you can see.

A mixture of Taxi Driver, Clockwork Orange and Death Wish it is a film that depicts a reality that most people in this country never experience, and when they do most people who do experience this reality do not survive.

The middle class liberal filth should watch this film and see how decent working class people of all races have to live in this country.

The film features a London that the tourist board do not ever depict, a Victorian underworld of drugs, violence, rape and crime where life is cheap and the most vicious bastards rule the streets with fear.

This is the world that multi-culturalism and liberalism has created, a world of mixed white and black gangs who target all races equally for shooting, attacks and murders, a community of mixed race criminals who have no racial identity but who are sociopaths and psychopaths who hate society and where racists and racism are reviled as the ultimate evil but where the violence of the new multi-cultural misceginated subhuman criminal class is minimised and appeased by the liberal elite.

The world of Harry Brown is the product of multi-culturalism itself.

The world of Harry Brown is the victory of evil.

From the first scene of a drive by shooting, the film is brutal and unremitting.

Scene after scene in this film were simply jaw dropping, from the poignant introduction of a man struggling to cope with his own sense of loss in touching scenes of loneliness, to him watching from his window the society he once knew turning into a hellhole before his very eyes.

The police are powerless and impotent, ruled by an ACPO social worker fop in a uniform more concerned with political correctness and promoting himself and his career in the media than fighting crime and solving the murder of just another old white man, whilst the female lead is almost lost in the flood of filth she finds herself in and her co-officer a cynic hardened into callousness by the world around him.

The message this film conveys is simple and correct - we need to start killing the criminals in our society.

The criminal animals in our society have grown strong on liberalism.

Therefore we must deal not just with the criminals, but also the liberal apologists for the criminals - and the primary mechanism for this must be via trials and executions.

There comes a time when in order to save society and protect the weak from evil, then the good must use violence.

The criminal justice system has become just another wing of political correctness and the criminals merely laugh at it - they have comfortable prison cells, playstations, three meals a day and gyms.

The ONLY people being punished in our country are the victims of the criminals, for whilst the criminals are cosseted in their five star holiday holes laughingly called prisons - the victims are left to rot in our sick, broken society.

I am not a reformist.

It costs fifty thousand pounds a year to keep a criminal in prison.

The Nightstalker who has been arrested recently will never be released and will spend up to forty years in prison.

As soon as the DNA sample from the Nightstalker comes back as being his DNA, then he should be taken out into the car park, a rope thrown over a tree and him lynched.

If they want someone to do it - I will do it for free.

There comes a time when if justice no longer comes from the state, then the victims must take justice into their own hands.

The prisons must be cleaned out with mass executions - all those professional career criminals who have used violence in order to make money, rapists, drug importers, paedophiles, terrorists and gangster killers must be executed.

I would pass a law Called The Community Protection Law and allow the cases of all those criminals who fit the criteria for community restitution to go before a special court which can then order the death penalty regardless of how long ago the crime occurred.

Justice will come one day.

We as a society can no longer tolerate the presence of so much scum in our society.

The sooner we start to cull the scum from our society, the better.

The day that society should be afraid of is when the good guys start arming themselves with guns to protect themselves from the criminals - and that day is fast approaching.

Some people may regard such a day with fear and trepidation.

I regard the day when the people take up arms to defend themselves as the day our national liberation begins.

Street by street we can cleanse our country of all the filth and scum, until a better country is born.

I support the right of people to take up arms to defend themselves from criminals, and I would much rather that this community cleansing takes place under a legal system rather than it being being done by illegal means.

I want to pass laws that will allow the people to bear arms as well as the criminals and the cops.

When criminals know they will be met with a militia in their own communities who will be prepared to deliver to them the bullets of liberty, is the day that the streets of our nation will be safe.

The final scenes of Harry Brown show him walking down into the subway where the gang that killed his friend once haunted like jackals.

They were gone, and the community was calm and peaceful.

The gang werent going to come out of prison to take over where they left off after a few years in a comfy prison.

Harry killed them all and thereby ensured that the community was protected.

The governments of the future have a choice.

Either allow the people the right to bear arms in their own defence or watch vigilante militias form to do so for them.

I will work to allow people the right to bear arms and defend themselves and their property.

The day that the criminals fear the people is the day we will be free again.

Evil flourishes when good men do nothing.

Therefore give good men the guns and let them destroy evil with the law on their side.

Posted by Defender of Liberty at 04:34

"I would pass a law Called The Community Protection Law and allow the cases of all those criminals who fit the criteria for community restitution to go before a special court which can then order the death penalty regardless of how long ago the crime occurred."

But unfortunately lee, the UK would face an economic blockade by the EUSSR and the UN and the country would go bankrupt within months forcing new elections and the marxists would be in power again.

It's nice to dream about a free nationalist UK but unfortunately the BNP or any other nationalist group would not survive a few months in power. Look at Austria, economic blockade within months by the EU after Haider's election, look at Switzerland's people's vote against Islam and the UN and the EUSSR's condemnation. Luckily Switzerland isn't part of the EUSSR so has a relative amount of say in their own nationalist identity and culture...for now anyway.

The only people that will be swinging on the end of ropes in the UK will be the hardcore nationalist leaders of Europe and their brethren who will be rotting in the darkest secret jails in the EUSSR.