Positive Discrimination and the Nobel Prize 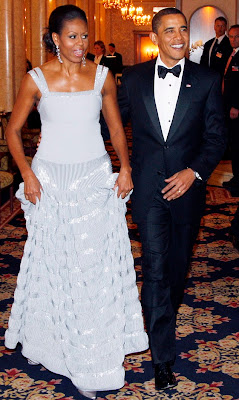 Image - Hurry up Obama, get the cheque and the medal before they change their minds - and then we go straight to the bank and cash the cheque. Kerching-Kerching baby.


Is there anything more vulgar, greedy and hypocritical than President Obama accepting the Nobel Prize - a prize he did not deserve and was only awarded because he was black.

For decades we have had ethnic minorities screaming at white people 'the only reason you have your job is because you are white and because of white privilege racism', yet now this has changed to a system of positive discrimination where the only reason many ethnic minorities get jobs is not because of their talent or hard work but simply their race and because they are not white - which is real racism as opposed to the infantile 'grudge racism' of the race relations industry.

This will sooner or later lead to people dying, companies collapsing and the economy damaged as they employ people not on the grounds of their skills or talents, but simply their skin colour.

Anyone who employs an lazy, under educated idiot simply because they are not white and they have an idiotic government 'race quota' to fill deserves to have their business go into bankruptcy. A nation which does that deserves to go through economic collapse.

The only FAIR SOCIETY is a Meritocratic Society, and the politically correct society we have created where people are employed and promoted simply because of their skin colour is a RACIST AND FASCIST SOCIETY.

Obama does not deserve a Nobel Peace Prize - as I stated even before he was elected nothing would change - Guanatanamo Bay is still open, US troops are still in Iraq and he is sending 30,000 more troops to Afghanistan.

He doesnt deserve a Nobel Prize - he is a Black Bush, another corporate whore who is a lackey of the big bankers, the oil companies and AIPAC that fund his election campaign.

Obama is a war monger just like Bush, but because he is black the whole world, and especially white Americans, are supposed to abase themselves before him and weep and wail with Zionist media manufactured white guilt.

Anyone dares criticise the Black Bush - hey man, youre a racist.

Anyone dares point out the truth - hey man, youre a racist.

Yet Obama doesnt care, even though HE KNOWS he doesnt deserve the Nobel Prize.

He just gives his goofy grin and waves at the camera and takes the cash.

How sickening is it to see ethnic minorities so gleefully milk the reverse racism of the race relations industry.

They will promote themselves and their own selfish interests even before those people who are truly deserving of the job, the role or the award.

What sort of example does this set to American kids - that you should just play the race card and take cash.

This is the equivalent of a robbery - and the 'menaces' is not done with a gun but with moral blackmail and white guilt.

Obama is a greedy prick.

I have no respect for anyone of whatever colour, race or religion that will steal.

And that is what he did - he stole that award.

He didnt deserve the Nobel Prize, but he still took it from the hands of people who really deserved it.

A big man and a real hero would have said ' I do not deserve this, so please give it to someone who does. When I actually get off my arse and do something that does deserve the Nobel Prize then I will accept it '.

Obama just gave the finger to a world based on equality, meritocracy and fairness.

This is a sick example to set to kids - he should be ashamed of himself.

This sort of greed merely ensures that those ethnic minorities who have worked hard and deserve jobs are regarded with suspicion.

Obama is just another black parasite, a professional race relations shuckster and rip off merchant who has disgraced himself, his office, the black American community and America itself.

He should resign for this disgusting act of greed and vainglorious self promotion and self enrichment.

Posted by Defender of Liberty at 01:02

Nothing to do with race this is NWO propagnda, they need to lift their puppet up in the eyes of the public hoping to gain him some credibility (it failed) as his popularity dives before he has had a chance to impliment all the NWO plans.

This is also why the peanut farmer tried to play the race card for him as they are both NWO stooges and the NWO is getting worried that the people have woken up to their little federal reserve/royal game.

the NWO have left, too many smoking guns and only an idiot would not see through it.

Whether it was or not shows that their is unrest and the public no longer trust their leaders - at all.

and for good reason.

the UK may never wake up to the same degree as the UK is far more socialist, where america has creeping socialism compared to Europe which already has an iron curtain decended upon it.

Our biggest hope is the USA where they have a constitution the people believe in, that gives then platform to destroy the NWO.

His popularity has taken a nose dive because people finally realize that he is a player politician like all the others. I like him and don't regret my vote, but I always saw through his "faux change" mantra. On the campaign trail, he clearly made promises that were impossible to keep. But people would just swoon over the crown prince Obama instead of calling him out on his false hope (some of his claims were false, not all).

Many people are upset that the trial for 9/11 terrorists will be in NYC (as per the Obama admin). I personally don't have a problem with that. What I am upset about is that he appears to be giving in to the demands of the right against a public option for health care.

Lastly, I simply cannot understand how someone can win a Nobel PEACE prize when they are clearly pro-war (he supposedly mentioned it over 3 dozen times in his acceptance speech).

To his credit, he did try to get the public to be realistic about him...most of us didn't listen.

One more thing. I don't believe that 9/11 was an inside job and I am deeply troubled by such claims.

"he clearly made promises that were impossible to keep"

He had a mandate from the people to impliment what he promised, he has lied every step of the way.

Most of which he could have implimented without too much trouble or complaint from the people - quite the contrary, only he works for the bankers/NWO and not the people and this is the key point and people can now see through it.

Same as when `Dave` comes to office people will expect real change and when they realise he is another NWO puppet they will get a rude awakening, at which point the Conservatives will collapse as fast as Labour if not faster.

Watch this video - The Obama deception, the most popular internet movie at this time.

Marxists and Commies a hate successful and excellence and unique talent that is to say if it White, thats why they seek to dum down western civilization and discriminate against Whites to get Blacks into jobs that they aren't up to; bringing everything down into the gutter called ''equality''

The people behind this - the banker elite and royals are not marxists or commies, they are totalitarians, they are using communist methods and the useful idiots to seek totalitarian control over the masses and to undermine all but themselfs, where thy seek total perpetual power.

They are not seeking any form of equality or redistribution of wealth to lift the masses or the third world, they are seeking total control and the communist state model fits the bill well, oiled as usual with the same lie - marxism. but it is not based on true marxist ideology, where the people get a fair share of the wealth, in an unatural system destined to become totalitarian anyway - hence the comunist methods.

The communism/marxist method is simply the most effective form of top down control.

If Communism really were about redistribution, fairness etc, it wouldn't be so bad though i still think we as humans need an incentive to excell and so capitalim is better.
Why do I need to work if I'm going to get a share anyway.

Similarly if we'd all been born into a stateless one world Govt, again we would simply grow up thinking it was normal, and it would be.

The truth is, the NWO, Communism are not about fairness, redistribution, they are about totalitarianism.
The fairness and redistribution bit is simply to get usefull idiots to go along with with their plans.
They are usually first against the wall when the takeover comes to fruition.

Now if I know this, surely our Generals do too, so why are they not kicking the door in.


The Bank of England Exposed

War and the International Bankers

Creating yet another crisis, and hundreds of millions dead, Martial Law, Mass murder, it's what Communists do, they can't help it.

They know we have woken up, they are going for broke because they know once a significant number of parents realise they have been deliberately poisoning their kids, they will be ripped to shreds, they have to go for broke now, and for that reason we are in more danger now than we have ever been, they are corned rats, only these rats have nuclear and biological weapons at their disposal and they have already demodstrated, they will use them to maintain their power.

I would applaud the post if it weren't for one major flaw , Sadly (sob ,sob) and that is , "Anyone who employs "an lazy, under educated idiot simply because they are not white" and they have an idiotic government 'race quota' to fill deserves to have their business go into bankruptcy. Excuse me?? !!!!""an lazy" under educated idiot simply because they are not white??" Is "an lazy" grammatically correct for such a "highly educated white person" who submitted the post attacking Obama ??? Get your grammar right mate ,or you will be made to look the laughing stock that you are ,if you think that you are better than, "an lazy" non white person like me , or should it be the grammatically incorrect term of "a lazy " which should be used?? Yezum you decide BOZ!!. I iz no educated no white humble person just making a point , or should it be "an point" ????