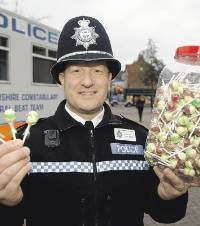 Sweet gesture...Sgt Pete Jelbert, who will be handing out lollies in Harborough.


THOUSANDS of lollipops are to be handed out to late-night revellers in Harborough in a bid to reduce booze-fuelled violence in the run up to Christmas.
Harborough Police have been given 4,000 of the sweet treats and they will be distributed by officers, door staff at venues in the town and by members of the street pastors scheme.

The lollies will be given out on Friday and Saturday nights.

Insp Neal Holland, policing commander for Harborough, said: “This isn’t a gimmick, it’s been tried in other places like Leicester town centre and it’s been shown to produce positive results in reducing violence.

“The theory is that the lollies remind people about their childhood or their youth and this in turn reduces the risk of violence.

“Officers will have them in their pockets and all people need to do is ask for a lolly.”

Insp Holland said this idea was the latest in a line of schemes to help reduce late-night violence in the town centre.

He added: “It also gives us a good excuse to interact with people.

“Everyone likes a freebie and I’m sure people will be approaching police officers to ask for lollies, and this in turn gives us an excuse to speak to them which breaks down barriers.

“We don’t have a police presence on the streets at night to spoil people’s fun, it’s about making sure people have an enjoyable evening and get home safely.”

Last year, officers handed out free bottles of water and the previous year a free bus service was laid on to get people home from Harborough to outlying villages.

Posted by Defender of Liberty at 12:43

How did that one get past the 'elf n safety officers?

I can't believe i've just read that, another initiative taken from the book entitled "101 ways to humiliate a police officer"...Donna