No Justice For Whites 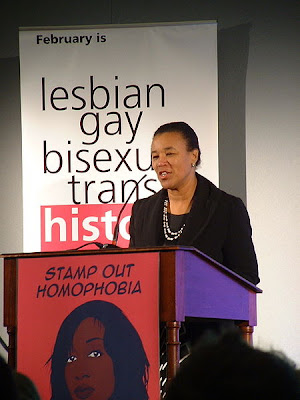 Image - Baroness Scotland. Labour appointed peer and labour appointed head of the CPS. Also a convicted criminal who employs illegal immigrants, but who was allowed to keep her job - even though it appears the CPS that she runs is incompetent according to the judge in the case below.

Justice for homosexuals, but not for white children raped by muslim paedophile gangs.


White people need to get angry.

When the judges are publicaly criticising the CPS for their failure to bring a case to court involving the racist rapes of white children by Muslim gangs, then we know we have a real problem in our country.

The CPS is run by Baroness Scotland - a black Labour appointed peer appointed to her job by the Labour Party.

Cases where Muslims are the 'victims' such as the case with the Christian hotel owners are prosecuted to the maximum by the CPS, but cases where White Working Class children are the victims of Muslim rape gangs are minimised, hidden and delayed for political reasons.

The Police are more worried about community tensions than justice for the victims, they will work hard to ensure the white community are kept ignorant of the crimes committed by these people in their midsts as the police are now merely the para-military wing of the Labour Party and crippled by political correctness.

This judge deserves to be commended, for he has exposed the sickness at the core of our society.

The White Middle Class Liberals and Tories dont give a shit about the white working class kids, as long as its not their kids being raped.

Our people need to get angry.

If we dont then these endemic cases of child rape are not going to addressed or dealt with.

Not one main stream media organisation has picked up on the story.

Not one mainstream media paper has run an article on the story.

My cousin lives in Dudley and a last week a Muslim woman in his street was beaten to death by her husband and her children then poisoned in an honour killing - yet the mainstream media did not pick this story up.

There are so many crimes involving ethnic minorities that are hidden in this country, that it is terrifying.

There are so many white victims of crime who are denied justice that it is incredible.

A case involving a Muslim woman having an argument in a hotel gets front page coverage and wall to wall TV coverage.

But the case of white working class children being raped by gangs of racist muslim is never publicised by the media.

We must get angry, there must be a symbolic act of some kind in order to get this issue raised in the media.

If we dont then the story remains hidden, and our children are left without any protection.

A JUDGE has comdemned an eight-month delay in bringing charges against an alleged sex ring accused of attacks on girls as young as 13 as "absoluttely scandalous."


He said it was a "lamentable failure" on the part of the Crown Prosecution Service, who had waited since March to bring the men to court following their arrest.


Members of the alleged eight strong sex ring were arrested in March in a series of early morning raids after being linked to a year-long series of sexual offences, committed around Rotherham, involving three 13-year-old girls and one adult.


But they were later released on police bail and had not been brought to court until their appearance at Rotherham Magistrates' Court on Wednesday.


District Judge John Foster strongly criticised the eight month delay in bringing the men—charged with a total of 16 rapes—to court.


Addressing CPS prosecutor Mark Hughes, Mr Foster said: "The complainants are 13 and 14 years of age and you are telling me that it’s acceptable to conduct an eight month Crown Prosecution review of the case before bringing these men to court? I can’t believe it.


"These are children who are going to have to give evidence about these allegations.
"They face the prospect of being cross-examined, assuming not guilty pleas are entered by one or more of the defendants. Someone has to explain this to me, it’s absolutely scandalous."


The accused men are:


The men lined up in the dock at Rotherham Magistrates' Court to face the raft of charges on Wednesday after answering bail at the town's Main Street police station on Tuesday.


Many of them had answered bail more than seven times since their arrests in March.


All eight applied for bail at Wednesday's hearing as solicitors argued that all had completed regular visits to Main Street police station as their bail conditions required.


But Mr Foster denied all eight their liberty by detaining them in custody prior to an appearance at Sheffield Crown Court on Wednesday, citing charges which could attract life sentences in some cases as a reason why they may not submit to bail in future.


Mr Foster added: "This has been a lamentable performance by the CPS in the delay which has been occasioned by their complete failure, it seems, to take any positive action in relation to this case since March this year."

many male homosexuals are attracted to young men

Baroness Scotland is not the head of the CPS. She's the Attorney General. Kier Starmer is the Director of Public Prosecutions, and it's he who heads the CPS.

Again you're taking two unrelated events and tying them together to try and get some outrage.

Why is the fact she's black at all relevant?

Lee Barnes- eternal peddler of bullshit. I dare you to approve this comment.

Yep your right - she is attorney general.

That means she in effect runs the CPS with Kier Starmer her deputy.

She is a minister in charge of the criminal justice system, and Starmer is her underling.

She personally has to authorise all race prosecution cases.

I wonder how many race cases she has authorised against blacks, asians etc compared to whites - well we all know that whites are the majority victims of race crime in the UK but also that they are majority group prosecuted for race attacks and that other non-white groups are not prosecuted as much.

You cunts want it all one way - all anti-white.

Blacks are now in charge such as in America and the criminal justice system in the UK and we are now looking at how racist these blacks are and how they use their powers to advantage their own race with positive discrimination etc.

They are more racist than any whites ever were.

Would you have put:

'The CPS is run by Lord Goldsmith- a white Labour appointed peer appointed to his job by the Labour Party. '

I severely doubt it. Are whites really the majority of victims in race-related incidents?

I want it all anti-white? Well, I'm white, so that would be counter-productive wouldn't it?

Blacks in charge in America? Oh hell, I suppose we should all worry that Obama is trying to bring in free healthcare and close Guantanamo Bay. Scandalous.

Also, you've gone slightly up in my estimation with actually approving my comments. The BNP site doesn't like me too much.

Lord Goldsmith is a Jew.

He is not indigenous British.

Whites can hate whites, and most liberals hate themselves and their own people as much as the non-white racists.

He wont close it - and everything he said he would do before he got elected was bullshit. He has not ended the Iraq War, has sent more troops into Afghanistan than Bush and caused more US debt and US troop deaths than Bush.

He is a scumbag whore, and if you really beleived what the media told you then you are a total fucking idiot.

Did you believe in the WMD claim war propaganda peddled by the corporate media as well you sucker !!!!

White liberal suckers like bought his bullshit - he is just another corporate owned political whore - a Black Bush.

Obama aint black - he is a corporate drone.

If voting for Obama would really have changed anything - then his corporate pay masters and the corporate media his paymasters own would never have allowed him to become elected.

Only fools think democracy is democratic.

Wow, are we sliding back into the anti-Semitism of the 1930's? I asked if you'd call him white, and here you are, rambling about him not being indigenously British. Being white and being British aren't mutually exclusive.

How has he caused more US debt?

No, funnily enough, I didn't believe a word of the WMD crap.

'Obama aint black- he is a corporate drone.'

Grumpygit: "'Obama aint black- he is a corporate drone.'

And he's not exactly black either. His mother was white and she and his grandmother raised him and got him educated, while his black father from Kenya buggered off and fathered eight other children around the world. Thus acting like the stereotypical black. However, the arese licking 'liberals' and the media have airbrushed his white connections out of the picture, preferring instead to emphasise his blackness.

If Obama is all bullshit and does what he's told, why is he killing his own approval ratings in the States to bring free healthcare to the very poorest Americans?

Lee's still not responded to where Goldsmith's religion fits into what I said about whether he'd describe his Lordship as white.

Instead, we get a foaming rant about him being Jewish and not 'indigenously British'.

Also, your point about Obama's father having 8 kids and being the 'stereotypical black' is complete shit. His father left for Kenya, had *two* children, and received a Masters in Economics from Harvard. He went on to become Finance Minister until 1982 when he died in a car crash.

Are you really a fucking media drone ?

He aint giving free healthcare you prick. the money comes from US citizens taxes paid by all US citizens.

The money then goes to the massive medical companies who bankroll the democratic party, this is just more corporate tax sponsorship.

The point about Goldmsith is that we go from a Jewish Attorney General to a Black one - how about a white working class eh and not the usual ethnics and middle class wankers who use the job to represent their own political and community interests.

Goldsmith is a Jew and not indigenous British - thats not a rant, thats a fucking fact you prat.

He is British - CIVIC BRITISH not Indigenous British.

Do you understand the difference ?

Where the fuck in the article do I talk about Obamas father, him having eight kids and his educational background - NOWHERE thats fucking where.

Are you reading the same article I wrote ?

Are you on drugs ?

Because you dont seem to live in the real fucking world.

Again, I never asked about Goldsmith's religion or indigenous status, but you were just champing at the bit to get some anti-Jewishness in there weren't you? You didn't approve my last comment, I wonder why.

When I mentioned Obama's father, I was replying to the other anonymous poster.

And I live in the real world. That's why the BNP is a minnow party that most people think talks complete horseshit, whining about the 'Islamification of Britain' and that being fat, lazy and on benefits isn't your fault, it's the darkies and Muslims!

Let me be completely off the wall and out of the box here, and say this: that maybe Baroness Scotland and his Lordship got their jobs because they were good at them.

If Goldsmith is a Jew and 'looking out for his own', why did he oppose the Iraq war and was coerced into giving legal credence by a white Protestant?