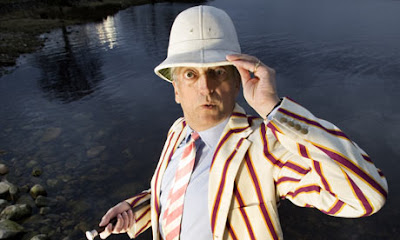 Image - yep its another UKIP tory toff. Check striped blazer. Check stupid hat and stupid pose for camera. Yep, its UKIP for him.

UKIP have pulled off an amazing feat, for the first time in history rats have decided to join a sinking ship.

Another Thatcherite Tory Toff has joined the UKIP ranks, this time the serious oddball Viscount Monckton, the man who wanted to round up all the people with AID's and throw them in a concentration camp.

You really cant make it up, and over on the British Democracy Forum they actually think this is a coup.

Someone a few weeks ago sent me a link to watch this bloke talk about climate change in America.

I watched five minutes, realised the guy was a total pompous prick who could bore for Britain and who loved the sound of his own voice and his own 'wit' and turned it off.

I realised many many years that the way to tell if someone is a wanker is if they laugh at their own jokes.

Those people who find themselves hilarious are always wankers.

If this is the new UKIP then bring it on.


Lucky old UK Independence party (Ukip). With great fanfare in Copenhagen, Viscount Monckton of Brenchley – the man who believes that action on climate change is a conspiracy to create a communist world government – announced this morning that he was joining them. He has made this momentous move, he tells us, because he has "become fed up with the hive mentality of British political discourse". British political discourse will doubtless miss him sorely, but does Ukip know what it is taking on?

I know that this party has become the last refuge of a marvellous collection of cranks and fabulists. In fact this seems to be its main role: care in the community for political eccentrics. But when even Rod Liddle, who is no friend of environmentalists, describes Monckton in his Spectator blog as a "swivel-eyed maniac", you can't help fearing that Ukip might be out of its depth.

Liddle linked to a speech Monckton delivered in October to something called the Minnesota Free Market Institute. In the speech, Monckton maintains that:

• He has read the treaty that will be signed at Copenhagen next week. That's quite a feat of clairvoyance.

• The treaty says that "a world government is going to be created".

• Greenpeace is "about to impose a communist world government on the world" and President Obama, who sympathises with that aim, will sign up to it.

These are not the first of Viscount Monckton's interesting statements. He has claimed, in a letter to two US senators, that he is a member of the House of Lords. He did once put himself forward for election among his peers. His score? Nul points.

He maintains that he is a Nobel peace laureate, on the grounds that he is an "IPCC reviewer" (the Intergovernmental Panel on Climate Change won the peace prize with Al Gore in 2007). On the same grounds, everyone who sent an unsolicited letter to the IPCC could claim a share in the prize. But in Monckton's case, he got a gold pin made for himself to prove it.

He contends that he won the Falklands war for Britain by persuading the British government to use biological warfare.

Now, on the CV attached to his announcement of his Ukip candidacy, he claims to be "responsible for invention and development of a broad-spectrum cure for infectious diseases. Patents have now been filed. Patients have been cured of various infectious diseases, including Graves' disease, multiple sclerosis, influenza, food poisoning, and HIV."

He spoils it all a little by boasting during one interview about telling "stories that aren't actually true".

But why let a trifling matter like that cast a shadow over Ukip's brilliant coup? In one new member they have landed a Nobel laureate, member of the House of Lords, saviour of the British armed forces and inventor of the universal cure. They should be feeling very pleased with themselves. Or very scared.

"the man who believes that action on climate change is a conspiracy to create a communist world government."

It is you moron! they have said as much in their own words, the evidence is already there, ask Obamalama, al whore and the new `pres` of the EU, Brown, etc they have stated as much and what do you think the EU is Lee seeing as it is run behind the scenes by the bankers who want a new world order/a global goverment. who do you think will profit most Lee?

Do you understand the global banking system Lee and the power it has? the connections it has? or the prople behind it's agenda, through their own statements!

It is no longer a conspiracy, they openly state it! ask rockafella.

Yet it seems you either have your head up your arse or you are being dishonest, in trying to score points while damaging the nationalist cause - the exposure of th NWO and it's methods - which includes the MM global warming hoax.

Monkton is also about the only person making any impact against the global warming hoax while the BNP have dragged it's feet until recently and now even Nick has said as much, please give the propaganda and spin a rest lee it just discredits you and the party!

Credit where credit is due Lee, and too be frank if you dont agree with nick and monkton on the global goverment agenda then quite frankly you should ask someone to turn the lights on! UKIP are probably state and have no solutions past pulling out of Europe, yet you attack him on something the BNP should be addressing as effectly as he has.

You make a great intellectual Lee but a really lousy spinmaster - dont bother in future, BNP supporter are free thinkers and are immune to this kind of bullshit.

If they weren`t they would support Labour!

so either cut the shit lee or do some research.

What a load of old shit.

Globalism is NOTHING to do with Communism, thats just simple idiot American bullshit.

CAPITALISM CONTROLS THE WORLD, NOT COMMUNISM.

For christ sakes live in the real world.

The idea that communism is a threat when we face Zionism, Islamism and Global Capitalism is insane.

Global governance, and the NWO, has NOTHING to do with communism.

Commumism is about as relevant to modern politics as Ceaserism.

The idea that the spectre of communism haunts the world, disguised as global capitalism and that the global capitalists who own and run the international banks, the bilderbergers, the Saudi Arabian oil owning Wahhabists and the Zionist international media corporations are all secretly communists is madness. Almost as mad as saying they are all lizards from outer space.

Monckton is as much an idiot as those 911 truthers who talk about hologram planes and that the Al Qaeda inspired Muslim hijackers did not fly the planes and that Mossad flew them by remote control.

He is a total liability to the anti-globalist, anti-climate change con of the global capitalist elite and the NWO they want to build.

People like him divert attention away from the truth and discredit the anti-globalist climate change con movement - because the theories they peddle are so idiotic, it discredits the entire movement.

Are you honestly telling me that the 'bankers' and Saudi Royal Family are all communists !!!!!!!!!!!


Are the Federal Reserve bankers in the US all Communists !!!!!!

Is Rupert Murdoch a communist !!!!

1) International Zionism and the domination of the planet by Israel

2) International Capitalism and the NWO

3) International Islamism and the global caliphate


Communism is about as much of a threat as the ghost of basil brush.

But it is part of an international conspiracy to set up a world Govt using engineered or ficticious crises.

All these different labels are simply a smokescreen, whether it is Communism or Zionism at the end of the day it is the Elites wanting to rule with absolute power over the rest of us.
Should we call it Fascism, Global Corporatism, Communism, Zionism, it's not important, the issue is who controls our lives and I believe that the Climate warming hoax is simply another way they can achieve that.
Another engineered crisis with which they can change our Sovereign laws into those of a Global Dictatorship.
What have we had so far, a Global war on terror, neccesitating Terror laws be brought in.
A Global credit crisis necessitating Global monetary controls.
A Global pandemic placing us under UN, WHO emergency measures.
And now this, a Global warming crisis.
And what word does Gordon spout every few seconds, Global Solutions, Global problems.

Of course if we had proper border controls and better intel, 7-7 might not have happened.

Why can't our own Doctors deal with any pandemic, deliberately engineered or not.

Global warming, if the problem were real, do you solve problems with pollution through mass mass immigration.

As for a Global Credit crisis, this wouldn't have happened in a self regulating Capitalist system, it's been engineered by the Bankers.
The Bankers who own the Bank of England and the US Federal reserve and are right now, through their engineered crisis setting up their Global Banking system.

I'm with Monckton on this, the Globalists, whether we call them Fascists, Zionists or Communists are setting up a One World Government.

War and the International Bankers

If you are to be taken seiously you cannot just say globalists are ' zionists, fascists, communists whatever' - you have to be correct and specific.

Monckton is talking bollocks - there is no global communist conspiracy re climate change.

Climate change is a mechanism whereby a global taxation / carbon trading system can be set up in order to act as the foundation for a future global government run for the benefit of global big business.

This global government will not be communist - it will be run by global corporations and facilitated by national governments elected by the corporate media.

Bankers are not communist.

The Saudis who own the oil aint communists.

Monckton is a nut - and anyone who listens to him is either a fool or out to discredit the real anti-globalisation resistance movement.

For now I know for sure, that it is Lee I will go to when I need firm advice.

It is he , who has acquired wisdom through life time experiences and most importantly have made the most mistakes , is the person who knows how "not to do it".

Ask your self this, "why is it that my children never listen and always think they know it all".

We know, they haven't lived and made the mistakes that we have as parents.

A close friend once said to me "T , how can someone as you, make so much money and make so many mistakes"

I said, "because I keep learning from them and try much harder than most" ;0)