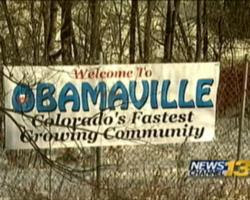 Residents of Colorado Springs, Colo., have a mystery on their hands: Who came up with the idea to erect a sign reading "Welcome to Obamaville" on the site of a homeless tent camp in the city?

The sign, which was visible from the Cimarron Street ramp to Interstate 25, clearly conveyed a political jab at rising unemployment under President Barack Obama, for it read in full, "Welcome to Obamaville – Colorado's fastest growing community."

Tell lawmakers in Washington that if they insist on spending more, they'll join the ranks of the unemployed, too. For just $29.95 you can send an individualized notice to every member of Congress in the form of a "pink slip."

Colorado television station KRDO first reported on the sign earlier this week, but without any identifying logos or clues to the sign's origin, the station launched a public appeal for information on the sign's author.

KRDO got its first clue when Spencer Swann of Colorado Canyon Signs confessed to constructing the sign, though he denied it was his idea and still refuses to divulge for whom he built it. He did, however, explain that there was more to the sign's intent than criticizing the sitting president:

"You mention his name, you get some attention – I think that was the whole idea behind it," Swann told KRDO. "I didn't dream it up, but I thought it was a good idea. I thought that it would help some of these guys down here."


Public reaction on the KRDO website has been mixed over the sign's message:

"Lay the blame where you will, I think it is a hoot and a great historical throwback to Hooverville," wrote a reader named daman in an online comment. "These are the worst times I've seen in my 40-plus years, and I am glad my kids get to see it early. Maybe they'll learn to grow and be compassionate, yet personally fiscal conservatives."

A poster named Nick, however, was critical: "That is pretty low to use a right-wing political agenda and attack the homeless during the worst recession in a generation and especially during the holidays."

Swann, however, says he's received nothing but support:

"I've had 100 calls today," Swann told the station, "and not a single one of them was negative."

Nonetheless, Swann has since replaced the "Obamaville" sign with another, which reads, "Please help. We need firewood, propane and canned food."

In response to some criticism that the money used to build the signs should have been used to help the homeless instead, Swann told KRDO that though the original "Obamaville" sign cost around $150, he didn't charge the unknown creator for either sign. Furthermore, he said, the instigator of the "Obamaville" sign is already involved with helping the homeless:

As for his own motivations for building the sign, and doing so without charge, Swann told KRDO, "I thought it was just something to draw attention and help those folks."

That's socialism for you. Change you can certainly believe in. Not to mention further cheapening the nobel peace prize.