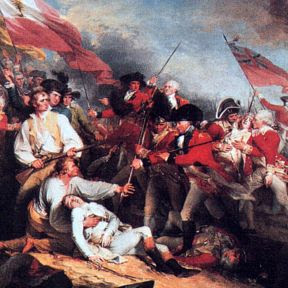 I started writing this poem almost verbatim and completed it within an hour or so, and I really like it.

Oh America, thou sacred colossus,
Mighty in thy gilded youth,
As when first you leapt,
Fully formed from the shining brow,
Of Albion in all his glory,
Wondrous in your robes of red,
As in fury rose the flames of liberty,
And scorched the dull sun,
As wild revolution spread,
Exulting, a new flag unfurled,
A higher state of union,
Forged in battle, tempered in blood,
A spirit, armoured with truth,
Wielding the sword of sacred vision,
Stood defiant before the ages,
Even Rome in all its power,
And proclaimed as herald,
A mighty empire coming as no other,
Whose will shall be stamped,
Upon the face of the whole world.


Yet from the heights of hubris,
So nemesis will fall, with wings afire,
As once did Lucifer, effulgent,
As a falling star, bringing disaster,
As war lets loose all its horrors,
The trenches and their poison gases,
Men slowly choking in the mire,
And drowning in the darkness,
As from the factories of science,
Come trundling out on their tracks,
Slow tanks sheathed in steel,
Whose words are sudden death,
Spat forth with a deadly stutter,
For the sin of betraying the Sioux,
Has brought forth its own revenge,
And death rides forth, upon its dark horse,
To stalk the land anew, seeking out,
Fresh prey in their pretty uniforms,
Having been betrayed by their own leaders,
To run amidst ranks of blazing cannons,
That swiftly shred the falling flesh,
As a sharpened scythe, slices through,
The fragile groaning harvest stems,
As countless in their agonies,
They fall screaming to the floor,
And we shall see thee America,
Thy blessed union now broken,
And your own people re-divided,
As spectres of discord rise forth anew,
and martial law mar thy majesty,
The cycle of the ages shall turn,
And turning, shall turn again,
Razing with fresh riots thy cities,
And as Rome once fell, so shall you.


White haired now, aged, weak and divided,
Poisoned by its own inner corruptions,
Cursed by the very power it cossets,
Even over the lives of its own children,
Sits in silence upon a throne of stone,
That binds in golden chains its master,
And faces the future blind and helpless,
As distant storm clouds draw ever near,
Until finally Crashing upon its shining towers,
Unleashing the oil black tide of crimes,
That mask themselves in plastic patriotism,
Whilst burying all their dirty little secrets,
In empty ballot boxes, the coffins of democracy.

Posted by Defender of Liberty at 12:23

Nick gets ball rolling - now it's time to flesh it out. said...

At last, Nick exposing the Bilderberg Group - next we want naming and shaming!

It's a step in the right direction, if a little late in the day.

Nick needs to contact some experts on the subject, and go all out for it, explaining the connections to the media and why all parties have the same policy and suck up to the bankers.

I even think Nick should make the GE broadcast on this issue.

yes many will try screaming `conspiracy nut` but with enough facts to hand and goverment and politicians unpopular and the public having no clue why, why not make it the march to truth.

As time goes by in the Cameron goverment the BNPs words will ring out time and time again.

do you really want to know the truth about -

wonder how they manipulate and brainwash you to keep voting the same crooks in and how they keep the BNP out even when the policies are the most popular?

do you want to be another lib lab con sheep?


wonder how banking system really works and why you are nothing more than slaves?

The answer is all there waiting to be told to the confused public.

It would be the biggest wake up call in the history of British modern politics.

as long as it is backed 100% by facts and names, it will stand on its own.

Nicks latest speech - a move in the right direction, now back it up with some substance.

The USA is waking up as they have movements exposing the banking system etc, we have next to nothing!

everyone called aklex jones and ron paul nuts, yet they are starting to lead public opinion by warning the public and telling the truth, we see the results this week with the new elected guy who says he is against big goverment.

Don't forget we are running out of time demographically - if we had enough facts and info we could pull it of - just facts and info - its all out there.

people may mock, may laugh - but when dave gets in and does an obama - NWO puppet, the people will know who to turn to.

it's time to get a lead on UKIP and make this our own.

it has legs and better legs than all the other issues as this isssue is the sum of the NWO parts - it nails the whole destruction in a non partisan way.

Otherwise what are you waiting for, the totalitarian creep to shut you down with the public remaining ignorant until it becomes too late?

Nice poem lee,especially the line where you said. "And as Rome once fell, so shall you".cos according to this it nearly f****** did.
http://www.fourwinds10.com/siterun_data/government/weapons/news.php?q=1264011739

Some of us have been urging a more strident and informative approach for years.
This had better not be another false dawn.

Has the BNP finally realised that the public are not idiots, and are capable of understanding the big picture?
So much time wasted ....

Wow, the future of the US is bleak. I hope you are not a prophet...