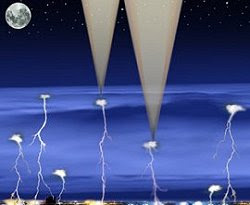 IMAGE - How gamma rays bursts of Photons cause lightning.


A few days I blogged about the Norse god Thor and Electro-magnetism and put forward a theory based on the myths of Thor that acted as the foundation of a new theory for the basis of lighting due to Photons entering the earths atmosphere interacting with clouds and the resulting energy exchange as electrons were stripped away by the water molecules in the clouds causing a build of static charge then leading to lighting.

A gamma ray is a packet of electromagnetic energy--a photon. Gamma photons are the most energetic photons in the electromagnetic spectrum. Gamma rays (gamma photons) are emitted from the nucleus of some unstable (radioactive) atoms.

Now NASA has confirmed that this is their latest theory on lightning and that they are sending a satellite up to check the theory out ;

Check the date of the article above.

Check the date of my article.

I think Jung would have defined this as an example of Synchronicity.

Because cosmic-ray air showers do not produce enough particles by themselves, Gurevich postulated that the thunderstorm gave the cosmic-ray shower a boost by increasing the number of energetic electrons through an exotic process called "runaway breakdown."

Runaway breakdown occurs when the drag force that electrons experience moving through air is less than the electric force acting upon them. In such cases, the electrons will "run away," gaining very large amounts of energy. As the runaway electrons collide with air molecules, they generate other runaway electrons plus x-rays and gamma rays, resulting in an avalanche of high-energy particles. Instead of rocks in a landslide, think of the runaway electrons as shrapnel tearing up a path through the storm cloud. According to the Gurevich model, this conductive path is what causes lightning.

Runaway breakdown can create large amounts of high-energy electrons, as well as x-rays and gamma rays. Interestingly, we know that runaway breakdown works for the low electric fields already seen inside thunderstorms. We also know that it does sometimes happen right before lightning, because we can see big bursts of x-rays and gamma rays shooting out of thunderstorms. In fact, these gamma rays are so energetic and so bright that they have been observed from outer space, 600 kilometers (373 miles) above Earth's surface.

So, does all this add up to cosmic rays as the cause of lightning? No one can be sure at present.


The fact that Thor is also the guardian of Life, is linked to lightning as it is now thought that lightning causes genetic mutations eg evolution ;

Very interesting synchronicity! I'm sure that Carl Jung would have approved, especially as he was so linked in with the re-emergence of the Odin archetype in modern times.

It will be interesting to know what the findings of the latest satellites reveal.

I wouldn't have thought that Cosmic rays are the sole cause of Lighting strikes, though Im not a researcher in this field though there must be the possibility that they MAY cause lightening at least on occaision by creating cascade effect.

Gamma rays are highly energetic, on colliding with an electron they may impart so much energy that these electrons too dislodge other electrons from other atoms/ions and so create lots of free electrons.

Any charge built up in the upper atmosphere might then be able to discharge through this.

This would be similar to what goes on in an atomic explosion, High energy nuclear particles from unstable nuclei, colliding with other unstable nuclei creating an exponential cascade that ultimately results in what we know as a Nuclear explosion.


It bugs me that the vast majority of people appear to have no knowledge of even relatively basic science.

I remember having a conversation with my Ex, quite surprisingly one day she asked if space was hot or cold.
I spent about 5 mins trying to explain that defining hot and cold was not as simple as it might appear, you could be in Space, in the middle of Huge excited gas Cloud in space, the kinetic energy of its particles might indicate a highly energetic temperature hundreds if not thousands of degree Centigrade, but there would be so few of these gas particles and ions to interact with you that you would freeze to death.

Before I could explain all this she lost her patience and said, I don't want to know all that crap, I just want to know is it hot or bloody cold !!!!!

Well it's both, the gas cloud would be described as highly energetic IE hot, but its gaseaous rarity means your thermometer would freeze, so it's Cold.
Hard to explain all thisd in the single minute I was awarded.

She watches Eastenders, X Factor, Big Brother etc though at 1/2 an hour a shot.

Sometimes I wonder if it's too late to save the once highly innovative and industrious British.

Check out how state stooge UKIP's maloney has spelt `Britian`.

Lee you are doing a great job. Thank you.