The Disaster the Media Forgot 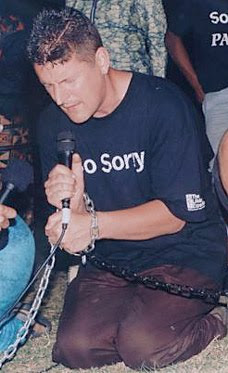 IMAGE - White, Liberal apologising for slavery three hundred years ago. " I am's so sorry. Jeyzuz told me ta apologise for tha sins of ma forefathers. I am soooo sooooo sorry. Please colonise ma country and ah will pays for it " 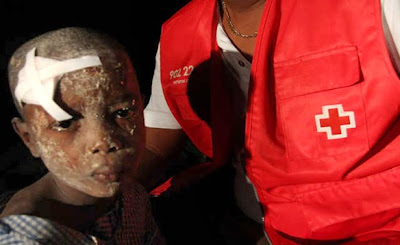 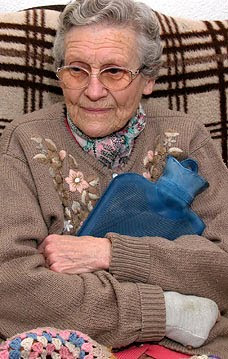 This year over 60,000 elederly British people will die of hypotherima as a result of the cold weather.

Yet there has been no mass media coverage of the deaths, no emergency heating rescue teams sent to their homes and communities to see if they can be saved, no heart rending images of frozen to death old people transmitted on the media 24/7 and no emergency statements of support from politicians.

Sue they get a heating payment, but regardless of that 60,000 are still going to die.

Nor have any white liberal, usually bespectacled females and de-testicled males in the name of 'Jeyzuz', flocked to communities in Britain to set up aid camps, rescue teams or teams to provide old British people with food and heating or to dig them out of their homes when they are two feet deep in snow and ice simply so they can get to the shops and buy food or put a few quid on their electricity and gas cards so they can eat and not freeze - instead they have all flown off to Haiti with their sanctimonious, smug 'Look at me Jeyzus loves me' grins on their faces to bask in the warmth of media reflected 'conspicuous humanitarianism' captured on their TV's and digital cameras and then e mailed back home so they can act all superior to their middle class, white friends at dinner parties in order to display their impeccable liberal credentials.

Give me a fucking break.

I am frankly sick and tired of seeing media stories about simpering white people in some foreign hell hole run by the most violent and corrupt despots on the planet, swanning about before the cameras acting smug and superior over dealing with 'johnny foreigners' whilst ignoring the devastation, mass deaths and tens of thousands of dying people in their own countries.

Its about time these people took care of themselves and stopped relying on us to save them.

Before ANY teams from Britain are sent abroad to assist in international humanitarian disasters, then they should first be forced to volunteer for a few years working with the most vulnerable people in their own country.

If they havent spent a few years working with their own people, and using skills that we as tax payers have paid for them to acquire, then they should not be allowed to leave the country and go on one of those 'disaster tourism' relief projects.

First you must spend a few years helping repair old peoples homes so that their residents do not freeze to death in the winter, you work with poor British kids in abandoned mining communities to stop them being junkies and criminals, you work with the disabled kids in Britain and assist them to have a little joy in their life and you spend the winter visiting old people in their homes and delivering food and digging them out of the snow - and ONLY then should you be licensed to take abroad the skills the tax payer funded you to acquire.

Sure they just love being photographed with some blood and dust smeared foreign child rescued from a fallen building, as it makes so much more a decent dinner story than saying that they helped keep alive an old white, 83 year old, D-Day veteran, who was freezing to death in a squalid caravan in a poor part of Britain.

It appears that once again for the selfish, stupid liberal scum their own people come last as usual.

Something for the self=flagellating white liberal apologists for slavery -

The libdhimmi in the above video -

So do these life luvving Liberal do -goooders think the poor and disadvantaged and delinquent white British people are 'beneath them' do they ?

What a load of complete drivel from an ignorant person with vile views. Shame on you.

It appears that the media likes to downplay any image of whites as an underclass or in any way downtrodden. This could be the reason why we don't hear about poor whites or the elderly suffering in severe cold. It's a good idea that relief workers are exposed to all kinds of suffering including that of whites. BUT, do whites benefit from being portrayed as they are (lack of suffering)?

On another note, nations do seem to be more willing to help people of other nations than their own. I noticed that the response to the black Hatians was a lot quicker than the response black Americans received during Katrina. They also seem to be treated more humanely. Therefore, race may not be the culprit in all cases.

Haiti has been free from the evil white racist since 1804. And they still live in filth BEFORE the earthquake.

Haiti was once the breadbasker of the carribbean

Exactly there is much anquish and handwringing going on in the comments sections of the online newspapers over the Haiti earthquake, even more money will be extracted from the willing sheeple, but where are these same people when our elderly are dying in their thousands unecessarily? They are so ignorant they probably do not even know, this faux outpouring of grief, i'm sorry but it makes me feel sick at their hypocracy, i send a comment similar to this to the mailonline but so far they haven't published, sometimes i just cringe at the British sheeple....Donna

Just look at that white guy so utterly wracked with self-loathing - what a mess.

Thank you for raising this important, and annual, loss of British lives.

Are the Haitians living in Britain planning to return to Haiti to help rebuild their country? No, thought not, therefore no matter how tragic the situation in Haiti the Haitian pleas for money and aid are somewhat hypocritical.

if any old people die this year from the cold its cos they didn't get off their arses and make something of themselves in life so they had something to fall back on in retirement. we live in one of the greatest countries in the world and if your gonna die here of freezing or starvation you have to work bloody hard to do so, you have to be a real fuckin loser. haitians don't have that luxury, and 200,000 people just died, many more in danger, so we help by sending aid and money. your a fuckin moron.
and i dont know if you can tell, but im not a liberal, you can be as racist as you please but you gotta be able to back it up with some good arguments. this article made me sick on the basis that it reads like shitty propaganda... someone as dull witted as this author is robably in danger of freezing in their old age hence the passion lol

@Doogal "if any old people die this year from the cold its cos they didn't get off their arses and make something of themselves in life so they had something to fall back on in retirement".....
..or it could be that they actually DID work hard but were honest, unlike the many system fiddling f***ers (native and foreign) who have shafted the UK.
This country is being destroyed by those who could not have built it

@Doogal: "we live in one of the greatest countries in the world and if your gonna die here of freezing or starvation you have to work bloody hard to do so, you have to be a real fuckin loser"

Finding myself redundant sometime ago I found it very difficult to get my correct benefits as I was continually misinformed and later lied to by the (mostly non-British) staff of my local jobcentre. I had to point out the relevant regulations from their decision makers guide in order to be awarded the rightful amount . Only my persistence, along with my knowledge of the regulations helped me to get what was due.
The poor old people (or "losers" as you call them) have a culture of believing whatever the bureaucrats tell them and very few are internet users and therefore have much less access to information than the average younger citizen.
Basically what I'm saying is...blow it out of your arse