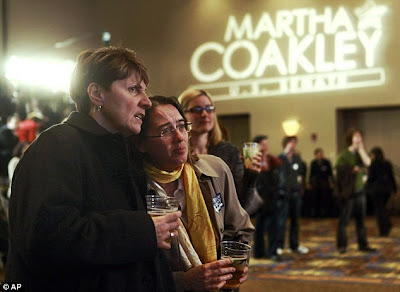 Excellent news. Now that America has seen through the media manufactured corporate and banker whore puppet shyster Obama, America now just has to rid itself of the Republican / Zionist AIPAC lice that feed off it and elect a true American Nationalist.

In what is being called the most momentous political shock in the United States for a generation, the victory of Mr Brown, a state senator and property lawyer, means that the Democrats have lost the 60-seat majority in the senate that enables them to close debate on legislation.

The president's cherished health care reform is now in grave danger of failing or being forced back to the drawing board, along with plans to tax carbon emissions and other ambitious items on his agenda.

Mr Brown won by 52 per cent to 47 per cent over Democrat Martha Coakley, the state's attorney general who ran an unexciting campaign, took Christmas week off and misspelled the state's name in an advertisement.

The vote was however seen chiefly as a referendum on health care and Barack Obama's first year in office, the anniversary of which falls today.

A packed hotel ballroom in Boston erupted in jubilation when the news of his victory was announced by Ayla Brown, the candidate's daughter. A former American Idol finalist, she had just taken the stage to perform and promptly burst into a rendition of Dancing in the Street.

Having accepted the congratulations of the president over the phone, Mr Brown told his wildly cheering fans that there would be other similar results in November's midterm elections, when the House of Representatives, Senate and gubernatorial candidates will re-contest their seats.

Portraying himself as an independent-minded underdog, Mr Brown, 50, drove his own truck as he travelled from town to town shaking hands. His catchphrase became: "I'm Scott Brown, I come from Wrentham and I drive a truck." He didn't dwell on his modelling career as a hunky but hard-up student.

A Washington outsider, he said his victory had sent a message to politicians in the capital that they had try again on health care.

"We won because of a shared conviction with voters that the people do not want a trillion dollar health care plan that's being forced on the American people. The bill hasn't been debated openly and it will raise taxes and destroy jobs and drive the country deeper into debt. We need to start afresh and work together to do the job better," he said.

Mr Brown's victory was built on large numbers of independent voters for whom health care was the most prominent of several provocative issues including persistently high unemployment, Wall Street bailouts and rising federal budget deficits.

White House advisers and other Democrats in Washington had already begun making excuses for what they called a poorly run campaign on Ms Coakley's part.

Ms Coakley, stunned to see a double-digit lead evaporate in recent weeks, counted on labour unions and reawakened Democrats to turn out on her behalf and asked the president to campaign for her last weekend.

Democrats in Washington are already assessing their procedural options for pushing through health care without Mr Brown's support, though any move would carry considerable political risk.

The people are waking up to the fact that Obama is a fraud. The whole Obama project is a massive deception - a gigantic lie. All the demented liberals who wept as Obama became president were played so completely and swallowed his "audacity of hope" bullshit like the imbeciles they are.

Obama is a slave of wall street, a puppet of the NWO - and all the idiots believed that the saviour with a black face had arrived - The Obama Christ. HAHA gullible fools.

List of Obama's broken promises - and there's a lot

This is a GOOD DAY!

I am enjoying the sight of those vile lefties crying into their cafe lattes.