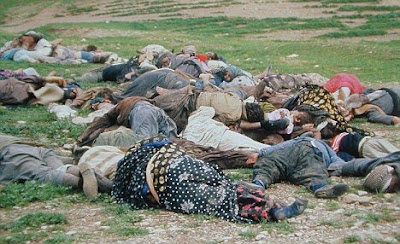 Image - Kurds killed by chemical weapons produced by a chemical weapons factory, Falluja 2, supplied to Saddam Hussein by the Thatcher Tory government. These are the victims of a Tory government, yet the Nothing British About the BNP site attacks the BNP whilst the party they work for, The Tories, is guilty of complicity in genocide.

So Chemical Ali has been sentenced to death in Iraq for using chemical gas against the Kurds in the Halabja massacre, March 17, 1988 that killed 5000 people, but why havent the ministers in the Tory government, and Margaret Thatcher who authorised the sale of the chemical weapons plant, Falluja 2, that supplied the components for the poison gas been prosecuted for supplying the technology to make weapons of mass destruction - even though the Thatcher government knew that the factory they signed an export license to be built in Iraq would be used to make poison gas ?

Note how the issue of Thatcher and the Tories involvement in arming Saddam Hussein has been whitewashed from history.


Article on the 17 British arms companies that supplied Saddam Hussein with weapons that were later used to kill and maim British troops in Iraq with munitions produced and supplied by British firms ;


Saddam Hussein's notorious cousin "Chemical Ali" has been sentenced to death by hanging for his involvement in a poison gas attack on the city of Halabja.

Families of some of the 5,000 Kurds killed in the 1988 attack cheered when the guilty verdict against Ali Hassan al-Majid was handed down Sunday.

The brutal attack on Halabja close to the Iranian border 22 years ago killed mostly women and children through a series of mustard and nerve gas bombings by Iraqi aircraft. Those who survived have been prone to developing cancer and birth defects are also common.

It is the fourth time since his capture by US forces in August 2003 that Majid has been sentenced to death for crimes committed during Saddam's rule.

He was first sentenced to hang in June 2007 for his part in a military campaign against ethnic Kurds, codenamed Anfal - or Spoils of War, after the title of a chapter in the Koran - of which the Halabja assault was a part.

Eighteen month later Majid received another death sentence, this time for the crushing of a Shi'ite revolt in the wake of the 1991 Gulf War, and again in March last year for his involvement in killing and displacing Shi'ite Muslims in 1999.

Nazik Tawfiq, a Kurdish woman who said she lost six of her relatives in the attack, came to court alone to hear the sentence. She fell to her knees and began to pray upon hearing the verdict.

'I am so happy today,' Tawfiq said. 'Now the souls of our victims will rest in peace.'

The Iraqi High Tribunal was set up to try former members of Saddam Hussein's mainly Sunni government and was the same one that sentenced the former president to death.

In Britain an opinion poll has revealed that almost a quarter of voters believe Tony Blair deliberately misled MPs over the Iraq war and should face war crimes charges.

Most people also think the former prime minister, due to give evidence to the official inquiry into the war within weeks, knew Saddam Hussein had no weapons of mass destruction, it suggested.

The YouGov survey for the Sunday Times found less than a third accepted that Mr Blair 'genuinely believed in the threat' which he used to publicly justify sending UK troops while 52% thought he had 'deliberately misled' the country.

Posted by Defender of Liberty at 06:54