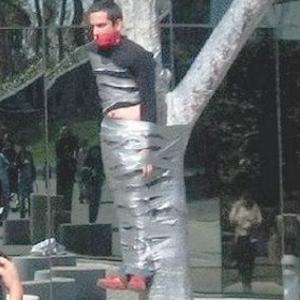 Local and state police scoured the hills outside rural Johnstown, Pennsylvania, after reports of three animal rights activists going missing after attempting to protest the wearing of leather at a large motorcycle gang rally this weekend. Two others, previously reported missing, were discovered by fast food workers “duct taped inside several fast food restaurant dumpsters,” according to police officials.

The organizer said a group of concerned animal rights activist groups, “growing tired of throwing fake blood and shouting profanities at older women wearing leather or fur coats,” decided to protest the annual motorcycle club event “in a hope to show them our outrage at their wanton use of leather in their clothing and motor bike seats.” “In fact,” said the organizer, “motorcycle gangs are one of the biggest abusers of wearing leather, and we decided it was high time that we let them know that we disagree with them using it…ergo, they should stop.”

According to witnesses, protesters arrived at the event in a vintage 1960’s era Volkswagen van and began to pelt the gang members with balloons filled with red colored water, simulating blood, and shouting “you’re murderers” to passers by. This, evidently, is when the brouhaha began.

“They peed on me!!!” charged one activist. “They grabbed me, said I looked like I was French, started calling me ‘La Trene’, and duct taped me to a tree so they could pee on me all day!”

“I…I was trying to show my outrage at a man with a heavy leather jacket, and he…he didn’t even care. I called him a murderer, and all he said was, ‘You can’t prove that.’ Next thing I know he forced me to ride on the back of his motorcycle all day, and would not let me off, because his girl friend was out of town and I was almost a woman.”

Still others claimed they were forced to eat hamburgers and hot dogs under duress. Those who resisted were allegedly held down while several bikers “farted on their heads.”

Police officials declined comments on any leads or arrests due to the ongoing nature of the investigation, however, organizers for the motorcycle club rally expressed “surprise” at the allegations.

“That’s preposterous,” said one high-ranking member of the biker organizing committee. “We were having a party, and these people showed up and were very rude to us. They threw things at us, called us names, and tried to ruin the entire event. So, what did we do? We invited them to the party! What could be more friendly than that? You know, just because we are all members of motorcycle clubs does not mean we do not care about inclusiveness. Personally, I think it shows a lack of character for them to be saying such nasty things about us after we bent over backwards to make them feel welcome.”

When confronted with the allegations of force-feeding the activists meat, using them as ad hoc latrines, leaving them incapacitated in fast food restaurant dumpsters, and ‘farting on their heads,’ the organizer declined to comment in detail. “That’s just our secret handshake,” assured the organizer.

Posted by Defender of Liberty at 10:59

Mind you, most of them would enjoy being tied up being pissed on!

As has Obumma and Crudd – no it’s not the NWO hitler youth these things just randomly magic out of thin air and the bilderberg group has nothing to do with it!

Besides how could it be, it hasn’t been on the BBC and they would tell you the connections right?

Under Cameron’s proposals, all of the UK’s 650,000 16-year-olds would take part in six-week projects after they leave school. The Tory leader has backed military training.

Lee the BNP need to pull out of this conscription game and start talking freedom and liberty.

or you will be adding to the mainstreme issue rather than opposing it.

I agree with Anonymous above. Whilst the idea of National Service sounds all well and good, I am extremely alarmed at the idea of Labour or the Tories introducing National Service. Cameron and Brown might try to introduce it under the illusion of tackling anti-social behaviour, but once it becomes firmly established it would then be used to force our children to fight in all of the wars that the current ruling elite are so keen to start. So2speak

This is the same as Obama's Hitlerr youth.

These are the NWO's Brown Shirts.

They maybe only Teens now but in 5 yrs they will be in their early twenties aremed with M16's.

Yet another Sinister development by the NWO.

What's the Betting that they will be predominantly a minority makeup.
This is a Cultural Revolution.

They are being armed.

This is why they have undermined Discipline, as a pretext for National Service,

It's the Old Problem Reaction Solution trick all over again.

There is even a General on Radio 4 saying he wouldn't use British Kids.

I think the bikers spoke for us all.....Donna