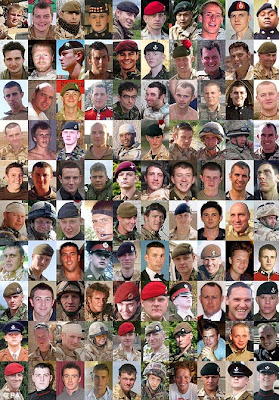 Look at them all, gaze into their eyes,
Seek the true measure of the men,
For you sent them to war with lies,
And to fight and die in distant lands.

Yet our heroes fell unsullied by sin,
And they rise as immaculate angels,
Heroes defined by their brave deeds,
Whispering as they die for their mothers.

They did not kill for profits or prophets,
Nor for oil and Israel, nor pipelines too,
They bore arms in defence of Britain,
But were betrayed by their own clansmen.

In the dust and heat of distant lands,
The boys at war soon become men,
And if death greets them on the road,
They shall live on, their souls hallowed.

And they shall rise, resplendent,
When Albion returns renewed,
And armoured with holy vision,
Be as new suns, burning in the blue.

The darkness shall flee and a new dawn rise,
And lady hope will bless us with a reprise,
Her fingers will pluck upon the sacred strings,
And her sacred harp thrill, as a new song begins.

But your hell will be a cold prison cell,
With pictures painted on its bare walls,
The faces of every fallen British soldier,
Who you led with lies into the slaughter.

Posted by Defender of Liberty at 06:48

250 of these Brave Patriotic Warriors we have lost in Afghanistan, it doesn't seem unreasonable to say that there must be 4 times this number who have suffered severe injury.
That's around 1000 of Britain's best with limbs or their sanity missing.

In my view this is a deliberate policy, before the EU can really take over, our military must be demoralised and culled.

This is why we are bearing the brunt of the fighting.

Nice Poetry by the way.


And look at the pittance they get for signing up, less than your average traffic warden FFS.

Once a soldier has been severely wounded and cannot be returned to duty, he or his surviving family should be set up for life.
£300,000

A pension in the form of a £1000 per year for every year in service paid monthly for life.
If they had that now there would be no soldiers sleeping rough on our streets at least.

This money would be spent into the economy, so it's not as if the rest of society wont benefit.
And it gets paid first to those who deserve it.

Not a fabulous amount I know, 10 yrs service resulting in £10k PA but would provide the basics and they could top this up by working part or full time, if they wish to.

If they are unable then the £300,000 takes care of that, there would be no benefits assesment, it's automatic.

Our Armed forces ought to be like our Nuclear deterrent, if it is a deterrent, can we actually fire those things independently ?

So deadly no one would dare consider it, so they end up never being used.