Nick Griffin Will Be Our Nelson Mandela 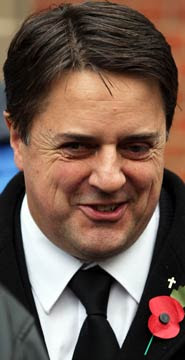 
Go on Phillips you bent race relations terrorist and profiteer go ahead and bang Nick Griffin up - that way he will become our nations Nelson Mandela.

You think the party cannot function without Nick.

He will love sitting in jail working on his autobiography.

It will be a nice rest in one of HM holiday camps for him.

Wii's, flat screen TV's and PSP 3's - he will be a whiz at Modern Warfare 2 when he comes out.

In fact we should set up a campaign 'BANG UP GRIFFIN' as the publicity will be priceless.

He will in a stroke become our nations Nelson Mandela, a man banged up by the corrupt scum in the EHRC and the figurehead for our national resistance movement.

If found guilty, Griffin could face a jail sentence

The British National party is facing a crisis in the run-up to the general election after it emerged that Nick Griffin, its leader, could be jailed over its illegal “whites only” membership policy.

Whitehall officials believe Griffin will be unable to comply in time with a court order forcing him to change the BNP’s constitution to admit Asians, blacks and members of other ethnic minorities.

They say the BNP’s membership is not due to vote on the constitutional change until after the court deadline expires towards the end of this month. Trevor Phillips, head of the government’s equalities watchdog, which won the legal ruling three months ago, has instructed his lawyers to be ready to ask the court to impose crippling sanctions, including a heavy fine or possible jail term against Griffin and Simon Darby, the BNP’s deputy leader.

If successful, the move could paralyse the right-wing party at a time when many at Westminster believe it is on the verge of winning its first seat in parliament with the support of disillusioned former Labour and Tory voters.
Related Links

Officials question whether the head of a political party who has been imprisoned, fined or has had his assets sequestrated could continue to be its leader.

“The BNP is very much Nick Griffin’s party,” said one official. “Were he forced to stand down three months before an election, then what are the prospects for the party? He could be replaced by someone who was much more hardcore. They would potentially be in disarray.”

The watchdog argued that the BNP’s constitution was unlawful because it restricted membership to particular ethnic groups and those whose skin colour is white.

Last October Judge Paul Collins agreed and awarded costs against the party. Griffin was forced to order a freeze on membership applications. The court gave him until January 28 to persuade the party to change its constitution and allow non-whites to join.

However, Griffin is unlikely to be able to deliver the change in time.

Posted by Defender of Liberty at 03:58