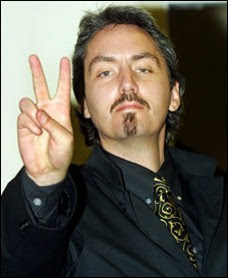 Image - The BNP secret weapon to win the Gay Vote.

It appears I have become a gay icon.

What with both Harrys Place ;

and Lancaster Unity running article on my appeal to the Gay Vote ;


I have decided to exploit this potential to reach out to a new voting demographic, this being the Gay Vote.

Formerly it used to be Mark Collett who got all the BNP Gay vote and attention, due to his appearance in a documentary where he was filmed with his T-shirt off and lifting weights.

I dont have to try that hard though for the Gay Vote, I just seem to be a Gayer Magnet.

Sorry Mark, but it appears I dont have to pose semi-naked, lift weights and get all hot and sweaty before the British gay population rank me as a BNP Sex Pot.

I wear my sparkly Gay Icon crown with pride, but just remember lads - you can look but you cant touch.

This guy is strictly hetero.

Posted by Defender of Liberty at 09:35

Well, we do know that any gay man, or woman for that matter has an imminant need to vote for us !!

In all Islamic "Peacful" Countries they put all of our; may be gay Comrades to death .

I must say Lee , you have some serious competition, becuae I may be tempted to show my 6" x Boxing inspired muscular frame for us to capture even more votes.

Again; hands off, I dont mind you looking and dreaming, but dont touch !

Hmmmm I thought you reminded me of someone, Lee ....

Lee, you handsome bastard, what about a new line of 'Barnes adult accessories'. I can see it now...

1. 'Barnes oil' (Kind on the skin, but a bit tingly around the EYE

2. 'The Big Lee mask' Be sure to to make all your leftist, gimpy friends cock their arse in the air.

3. 'The barnes Rabbitt' No need to call animal welfare with this beast. Every UAF member has one.

The list is endless, so just remember where you heard it first when the royalities come rolling in. Get your tats out for the boys!!!

"We believe, if proof were needed, this is yet another example of the BNP’s crazy conspirtorial politics and anti-Semitism."


Anti-semitism? You merely pointed out that a business man with ideological, historical, cultural and spiritual ties to another nation in this case Israel is buying off British politicians to support the cause of Zionist Israel.
This isn't anti-semitism but factual.
Keep up the great work Lee, you sexy beast you.

I reckon I am gonna have to copyright some of those before the UAF nick those ideas.

ok mate - its a Gay Icon show out.

Send us a pic to the e mail above and I will have a vote on which BNP member is the biggest gay icon.

Is it the muscly extant or the sensitive Barnes, the boxer or the lover boy,

over to you boys.

A photo will be over this evening Boss , its Gay vote showdown at the BNP folks ;o)

Will it be The Lover or The Fighter.

Only you gayers can decide.

There appears to be several contenders for the gay icon crown, Lee.
We should nominate our favourites and have a ballot.
I nominate GA alias The Pink Arrow, and Arthur Kamp :-)

I'm straight as an arrow but now I've seen that picture I'll be giving the missus her marching orders.

(No arch-lefties, that doesn't mean I'll make her march like a Nazi... but if she dresses up as Helga from 'Allo, 'Allo I may well put my secret love for Barnsey back in the closet.)

I hope it's going to be the full monty chaps.
We must have some real gay members, or at least supporters?
Come on you gay nationalists, get out of your red white and blue closets, put the uaf self-loathers to shame and show your patriotic stuff!

Let the contest begin, my photo has been sent.

Fighter or lover , I say I may have more votes , over to the Gayers to vote !

End of the British Empire said...

It's all over for the Britain now, even Lee Barnes has been subverted.

End of the British Empire-

Lighten up Grumpy Bro, we are giving the lefty scum some real competition and something to be jealous about, not to mention the priceless publicity.

I'm gay and I found this rather funny :-)

Seriously, I am, I don't want to end up being hung when labour let's Islamic extremists take over.

You havent seen the photos yet mate, then you will laugh, im sure Lee is going to put them on soon.

We at the BNP consider and respect everyones rights, we are simply realists, not dangerous Marxist's !

Think of the social norm's and community cohesion of the 1950's; thats us in a nut shell and thats what the RWB was like this year.

It is undeniable that as the Islamic population grows (10 children per family) ,within 15 years everyone will be persecuted, not just Gay's; this is a fact.

Please join our ranks, you and all your friens are welcome.

Speaking as a 40 year old gay man, am not sure where your iconic status has come from. I shall be voting BNP not because of any attraction to any of the BNP representatives, but because labours policy has the single white male being the most discrimated against person in this country. Again speaking as a gay man, I would hope the BNP would do something to control the outrageous behaviour of gay men. The more acceptence we get the more outrageous we seem to become. I've never been more ashamed to be a gay man than I have been in recent years. Equality is one thing, promotion is another. Labours attitude promotes homosexuality as some kind of norm, even some of us homosexuals realize that it is not normal and it is not a lifestyle I would wish on my worse enemy.