OUT OF AFRICA THEORY DEMOLISHED 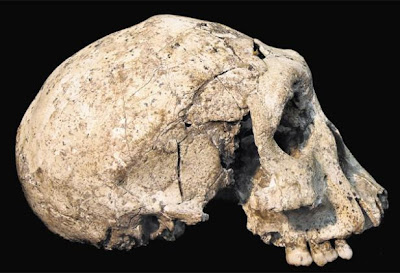 The founding myth of liberalism is the One world, One Race, Out of Africa Theory.

It has now been demolished.

The ancestors of all modern humans evolved from European Dmanisi Hominds in Europe, not from African hominds in Africa.

The Homo habilis line represents the earliest known divergence from apes and the homind human / ape line first evolved from apes in Africa.

The Homo Habilis then must have left Africa and entered Europe and evolved into the Dmanisi Hominins.

The Dmanisi Hominins then evolved into Homo Erectus.

All Modern Europeans are the descendants of Homo Sapien Cro-Magnons and therefore the idea we are all one 'human race' is false.

There are many human races, not one.

The Homo Erectus and Homo Sapiens that evolved in Africa, or Europe, from Dmanisi Hominds then became the originating populations of the White and Black Race.

It is far more likely that Homo Erectus evolved in Eurasia than Africa and then moved to the African continent where it evolved into Homo Sapiens.

It may even be that Homo Sapiens evolved in Eurasia and then spread to Africa to become Black Homo Sapiens whilst other Homo Sapien populations moved to Northern Europe and then became White Cro-Magnons who are the ancestors of modern Europeans, which means Homo Sapiens never evolved in Africa at all but Eurasia.

Humanity was European before it was ever African.

The founding myth of liberalism is lost.

The entire history of humanity must be re-written.

The ancestral 'Eve' was a European not an African.

We now have The Out of Europe Theory.


A skull that rewrites the history of man

It has long been agreed that Africa was the sole cradle of human evolution. Then these bones were found in Georgia...


One of the skulls discovered in Georgia, which are believed to date back 1.8 million years


The conventional view of human evolution and how early man colonised the world has been thrown into doubt by a series of stunning palaeontological discoveries suggesting that Africa was not the sole cradle of humankind. Scientists have found a handful of ancient human skulls at an archaeological site two hours from the Georgian capital, Tbilisi, that suggest a Eurasian chapter in the long evolutionary story of man.


The skulls, jawbones and fragments of limb bones suggest that our ancient human ancestors migrated out of Africa far earlier than previously thought and spent a long evolutionary interlude in Eurasia – before moving back into Africa to complete the story of man.

Experts believe fossilised bones unearthed at the medieval village of Dmanisi in the foothills of the Caucuses, and dated to about 1.8 million years ago, are the oldest indisputable remains of humans discovered outside of Africa.

But what has really excited the researchers is the discovery that these early humans (or "hominins") are far more primitive-looking than the Homo erectus humans that were, until now, believed to be the first people to migrate out of Africa about 1 million years ago.

The Dmanisi people had brains that were about 40 per cent smaller than those of Homo erectus and they were much shorter in stature than classical H. erectus skeletons, according to Professor David Lordkipanidze, general director of the Georgia National Museum. "Before our findings, the prevailing view was that humans came out of Africa almost 1 million years ago, that they already had sophisticated stone tools, and that their body anatomy was quite advanced in terms of brain capacity and limb proportions. But what we are finding is quite different," Professor Lordkipanidze said.

"The Dmanisi hominins are the earliest representatives of our own genus – Homo – outside Africa, and they represent the most primitive population of the species Homo erectus to date. They might be ancestral to all later Homo erectus populations, which would suggest a Eurasian origin of Homo erectus."

Speaking at the British Science Festival in Guildford, where he gave the British Council lecture, Professor Lordkipanidze raised the prospect that Homo erectus may have evolved in Eurasia from the more primitive-looking Dmanisi population and then migrated back to Africa to eventually give rise to our own species, Homo sapiens – modern man.

"The question is whether Homo erectus originated in Africa or Eurasia, and if in Eurasia, did we have vice-versa migration? This idea looked very stupid a few years ago, but today it seems not so stupid," he told the festival.

The scientists have discovered a total of five skulls and a solitary jawbone. It is clear that they had relatively small brains, almost a third of the size of modern humans. "They are quite small. Their lower limbs are very human and their upper limbs are still quite archaic and they had very primitive stone tools," Professor Lordkipanidze said. "Their brain capacity is about 600 cubic centimetres. The prevailing view before this discovery was that the humans who first left Africa had a brain size of about 1,000 cubic centimetres."

The only human fossil to predate the Dmanisi specimens are of an archaic species Homo habilis, or "handy man", found only in Africa, which used simple stone tools and lived between about 2.5 million and 1.6 million years ago.

"I'd have to say, if we'd found the Dmanisi fossils 40 years ago, they would have been classified as Homo habilis because of the small brain size. Their brow ridges are not as thick as classical Homo erectus, but their teeth are more H. erectus like," Professor Lordkipanidze said. "All these finds show that the ancestors of these people were much more primitive than we thought. I don't think that we were so lucky as to have found the first travellers out of Africa. Georgia is the cradle of the first Europeans, I would say," he told the meeting.

"What we learnt from the Dmanisi fossils is that they are quite small – between 1.44 metres to 1.5 metres tall. What is interesting is that their lower limbs, their tibia bones, are very human-like so it seems they were very good runners," he said.

He added: "In regards to the question of which came first, enlarged brain size or bipedalism, maybe indirectly this information calls us to think that body anatomy was more important than brain size. While the Dmanisi people were almost modern in their body proportions, and were highly efficient walkers and runners, their arms moved in a different way, and their brains were tiny compared to ours.

"Nevertheless, they were sophisticated tool makers with high social and cognitive skills," he told the science festival, which is run by the British Science Association.

One of the five skulls is of a person who lost all his or her teeth during their lifetime but had still survived for many years despite being completely toothless. This suggests some kind of social organisation based on mutual care, Professor Lordkipanidze said.

Posted by Defender of Liberty at 00:12

Labels: humans evolved in Europe, Out of Africa Theory, Out of Europe Theory

Professor Lordkipanidze said : "The question is whether Homo erectus originated in Africa or Eurasia, and if in Eurasia, did we have vice-versa migration? This idea looked very stupid a few years ago, but today it seems not so stupid," he told the festival."